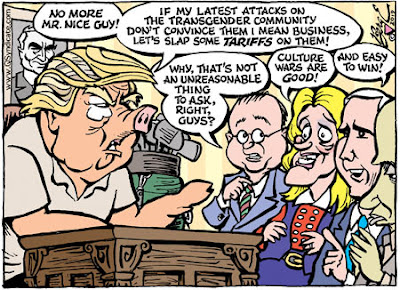 Donald Trump — or whoever took charge of his Twitter account Friday afternoon — posted the first acknowledgement of LGBTQ Pride Month of his presidency last week. 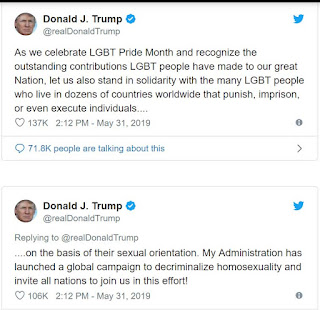 Was that really Donald Trump, or did Ric Grenell hack the presidential Twitter account? There are no misspelled words, sentence fragments, or gratuitous digs at President Obama. And there are only two words that were capitalized unnecessarily.

Whoever it was, I have to wonder if he or she knows what the "T" stands for. Or that LGBT does not stand for "Lesbians & Gays Backing Trump."

The "T" stands for Transgender, a group that has endured sustained hostility from the Corrupt Trump Administration. I've drawn before about their determination to remove protections for transgender prisoners and to boot transgender soldiers out of the military; now they have moved to block transgender civilians from medical care under the Affordable Care Act.


The Department of Health and Human Services announced Friday it plans to remove gender identity from the class of people protected from discrimination in health care.
The agency said it is revising a section of Obamacare that provides protection against discrimination in health care on the basis of race, color, national origin, disability and age. A rule published under the Obama administration in 2016 confirmed that transgender people were protected under the law’s provisions that prohibit discrimination from providers and insurers.

Earlier in the week, the Department of Housing and Urban Development put forth a ruling allowing homeless shelters to discriminate against transgender persons.


Nearly one-third of transgender Americans who responded to a 2015 survey have experienced homelessness in their lifetime. Requiring transgender people to stay in shelters that don't match their gender identity can put them at further risk of violence and harassment, according to the National Center for Transgender Equality.

Trump has, so far, pushed one anti-transgender policy after another upon the Departments of Defense, Health & Human Services, Housing & Urban Development. Labor, Homeland Security and the Justice Department can't be far behind.

Before he gets driven from office, look for similar edicts protecting anti-transgender discrimination by energy companies, national parks, and the IRS.
Posted by Paul Berge at 4:00 AM