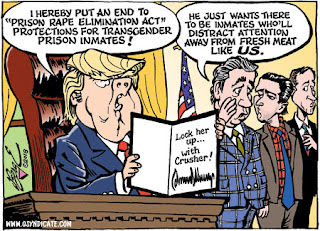 In his never-ending quest to erase all traces of the Obama presidency, Donald Joffrey Trump last week issued an executive order reversing provisions of the Prison Rape Elimination Act geared to protect transgender persons in the prison system.


The Bureau of Prisons now “will use biological sex” to make initial determinations in the type of housing transgender inmates are assigned, according to a notice posted Friday evening that modifies the previous policy.
...
The shift comes after four evangelical Christian women in a Texas prison sued in US District Court to challenge the Obama-era guidelines, and claimed sharing quarters with transgender women subjected them to dangerous conditions.

Their complaint alleged housing transgender women — whom it calls “men” — along with the general female population ”creates a situation that incessantly violates the privacy of female inmates; endangers the physical and mental health of the female Plaintiffs and others, including prison staff; [and] increases the potential for rape.”

Their lawsuit took aim at regulations established in 2012 to protect transgender inmates from violence under the Prison Rape Elimination Act and a guidance memo — issued days before Obama left office — on how to handle transgender inmates. The memo noted that transgender prisoners face an "increased risk of suicide, mental health issues and victimization."

The rules said officials must give “serious consideration” to the wishes of transgender and intersex inmates when assigning facilities, while also instructing prison staff to “consider on a case-by-case basis whether a placement would ensure the inmate’s health and safety, and whether the placement would present management or security problems.”

Without entirely dismissing the concerns of incarcerated women out of hand, the record is very clear that the Corrupt Trump Administration is extremely biased against transgender Americans. Trump, Pence and their henchmen have moved to kick transgender service members out of the military, to force transgender students into the lavatory of the government's choice, and declared that transgender people aren’t protected under federal civil rights law barring discrimination on the basis of sex.

Frankly, I don't think Trump is at all worried about what conditions Cohen, Junior or Jared would find in jail; he's not concerned with anyone but himself. Besides, unless one of his co-conspirators squeals to the feds first, Trump will surely issue pardons like confetti.