I'm sensing a lull in the conversation.
Posted by Paul Berge at 7:57 AM No comments: 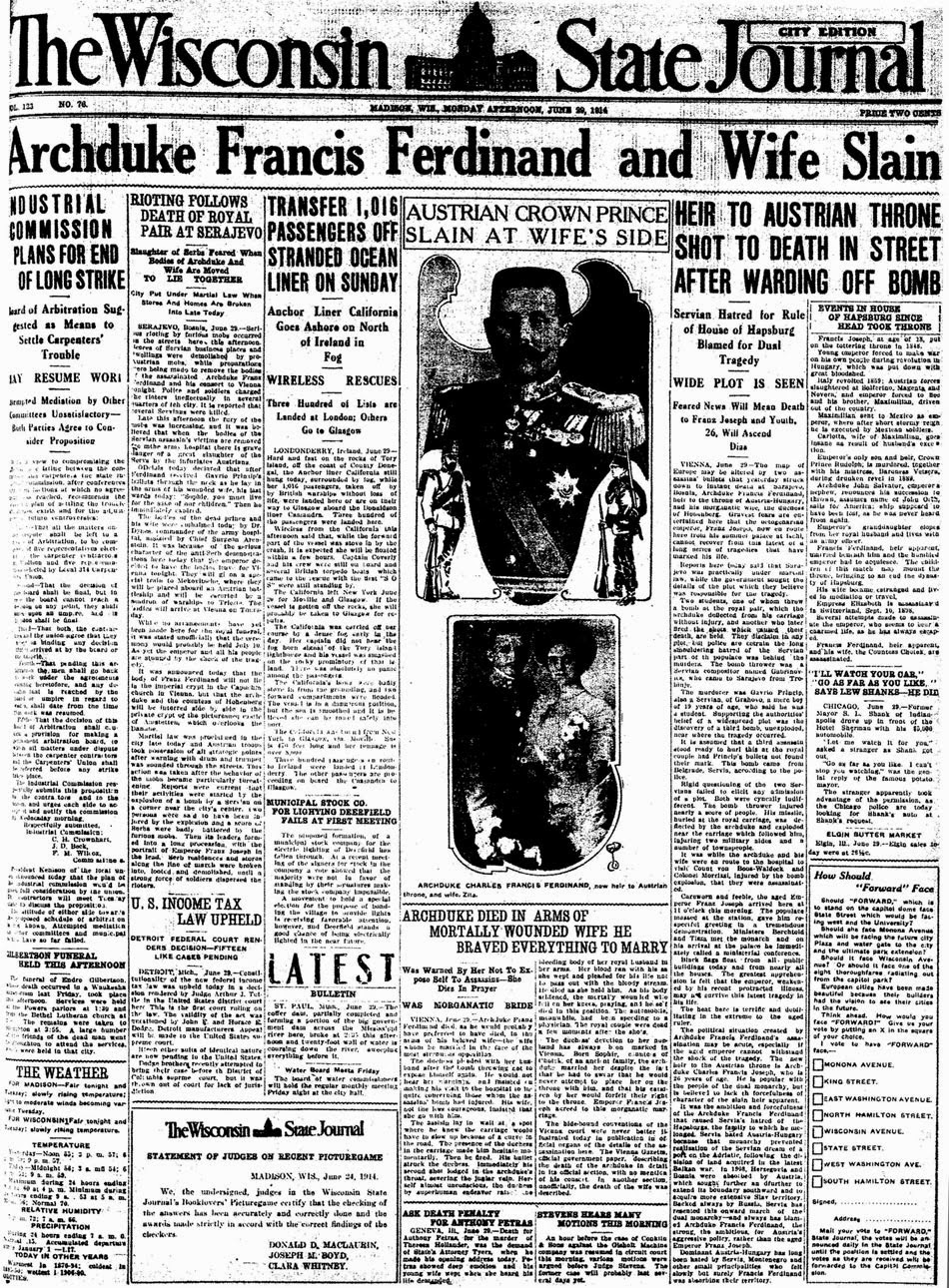 One hundred years ago today, a limousine came to a stop in front of a scrawny little man with a gun, and the world was changed forever.

37 million died on three continents. Empires crumbled. Royalty became an anachronism. The Soviet empire was born. New York supplanted London as the center of world finance. Spanish influenza circled the globe. Europeans drew the borders of Iraq.
Posted by Paul Berge at 9:43 AM No comments: 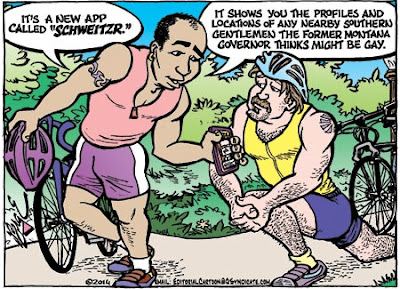 As American media have begun to realize how boring the next two years of Democratic presidential run-off will be if Hillary Clinton is the only one running off, some have been casting around in search of potential challengers.

The loquacious former Governor of Montana, Brian Schweitzer, was considered to be one possible rival.  That is, until he offered the National Journal his two cents on soon-to-be-former House Majority Leader Eric Cantor's surprise loss in a primary race for reelection.


"Don't hold this against me, but I'm going to blurt it out. How do I say this ... men in the South, they are a little effeminate. ... They just have effeminate mannerisms. If you were just a regular person, you turned on the TV, and you saw Eric Cantor talking, I would say—and I'm fine with gay people, that's all right—but my gaydar is 60-70 percent. But he's not, I think, so I don't know. Again, I couldn't care less. I'm accepting."

This display of candor has effectively removed Schweitzer from presidential level consideration. I mean, you can't just go around questioning the he-manliness of every gentleman from below the Mason-Dixon line if you want to be taken seriously.

That sigh of relief you hear is from the Senior Senator from South Carolina.
Posted by Paul Berge at 7:43 AM No comments:

It's summer, and time to leave the house and enjoy the great outdoors.

Unless, like me, you have a summer cold knocking you down. Then you have to settle for drawing cartoons about the great outdoors.
Posted by Paul Berge at 11:27 AM No comments:

The current war of a word over the name of the Washington Redskins reminds me of when many colleges and high schools were going through the same debate back in the 1980's.

Two colleges in my area had teams known as the Redmen and the Warriors. The Carthage Red Men were originally named as the counterpart to a sister school's Blue Men, but the college flag showing a letter "C" sporting Native American warrior feathers left no doubt what the name had come to mean. The Marquette Warriors could just as easily have had a blue-faced kilt-wearing Pict wielding a claymore for their mascot, but in their case, Warrior meant "Willie Wampum."

To their credit, these colleges ultimately yielded to public pressure to change their team names (now Big Red and the Golden Eagles), but not without a good deal of rancor and resistance.

Drawing a comic strip about higher education for a student newspaper on a campus whose sports teams offended no ethnic sensitivity, I was inspired to introduce a sports department to my fictional campus. You may want to click on this image to embiggen: 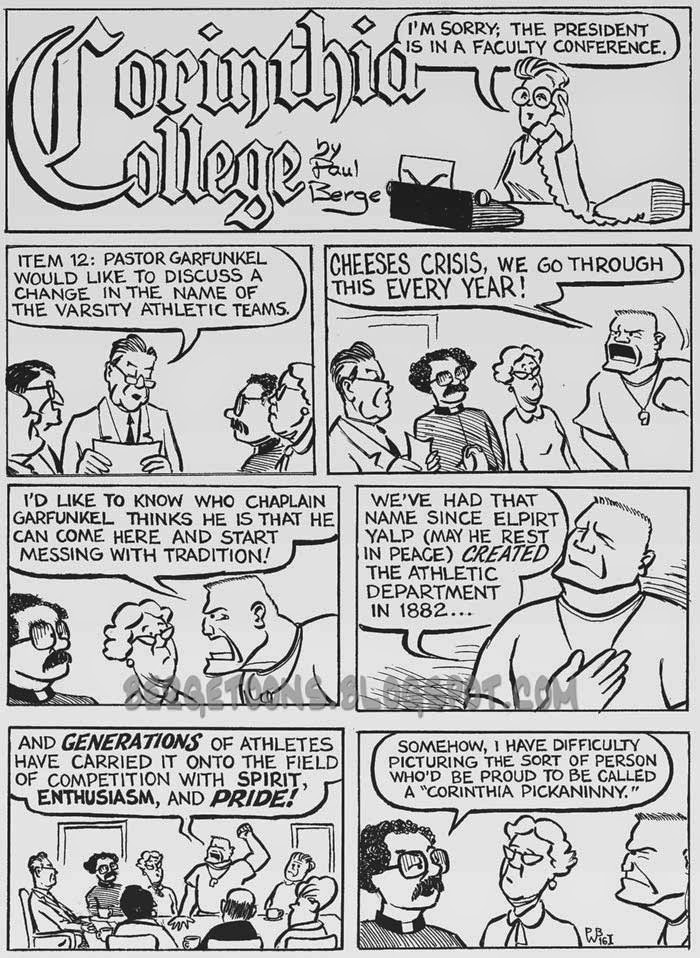 The catch, as far as this gag goes, was that I had to come up with a team name that was ridiculous yet truly offensive. Most cartoons attempting this topic imagine insulting depictions of white people -- crackers, honkies, palefaces, trailer trash, etc. They're demeaning terms, but they demean the dominant majority culture, so it's okay, the theory goes. As a result, they annoy, but don't wound.

My next installment in the series was the last on this topic. I think you'll quickly see why. 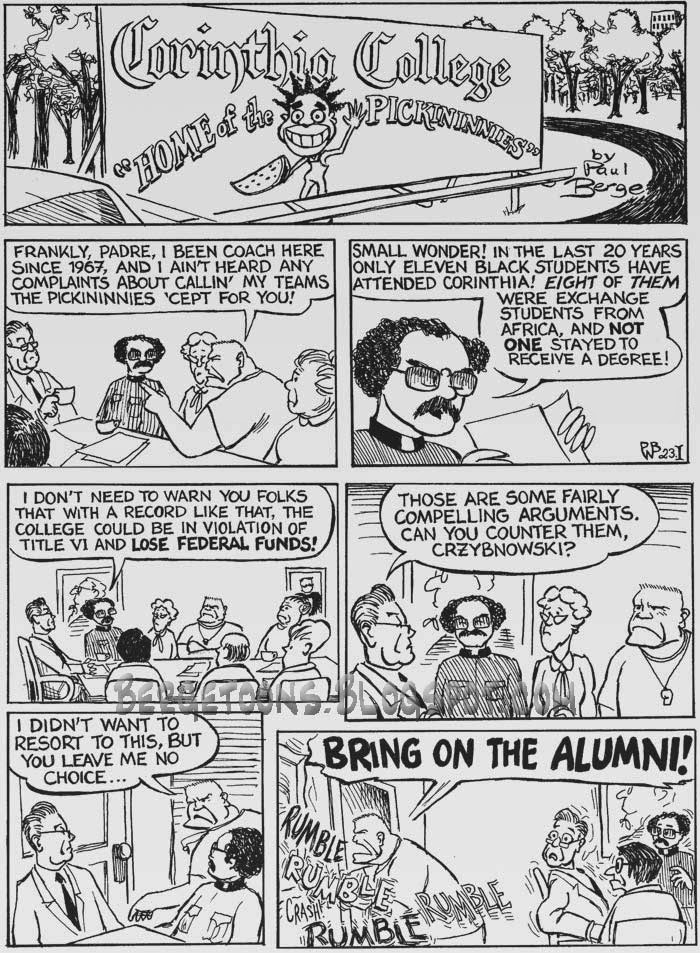 I imagine that Corinthia College's sainted coach Elpirt Yalp would have been considered quite liberal in his day for his admiration of Negro Culture, to use the terminology of the time. But popular sensibility had risen above his lofty ideals by the 1980's. The Theater Department would have ceased performing darkie songs in blackface in the 1970's -- although there might still have been a fraternity forcing their pledges to do it.

In the end, one can claim that appropriating someone else's heritage for a sports logo, however well-intentioned it may have been once upon a time, never remains benign for long. A tomahawk chop becomes popular. The cartoonist designing your logo produces a racist caricature.

If you want an ethnic mascot, you might just have to look to your own background. The Minnesota Vikings and the Notre Dame Fighting Irish are free to celebrate their own heritage in a way that the Coachella Valley High School Arabs cannot.

Better yet, choose a feisty or majestic animal, or a respected profession. (Sorry, but "The Packers" is already taken.) 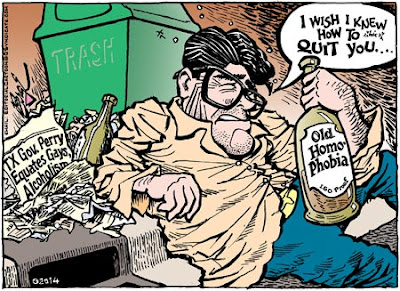 At their party convention earlier this month, Texas Republicans added a platform plank supporting "reparative therapy," a disreputable form of brainwashing euphemistically known as "praying away the gay." Appearing before the Commonwealth Club of California in San Francisco last Wednesday, Governor Rick Perry (R-TX) was asked whether he believes that homosexuality is a "disorder." He essentially called it a disease, like alcoholism.


"I may have the genetic coding that I'm inclined to be an alcoholic, but I have the desire not to do that. And I look at the homosexual issue in the same way."

Asked to defend his remarks, Perry fell back on the old "We are all children of God" treacle that is meant to sweeten any accompanying hateful statement.
Posted by Paul Berge at 7:34 AM No comments:

It looks like it must be a rough day for mild-mannered Daily Planet reporter Clark Kent.

Posted by Paul Berge at 7:46 AM No comments: 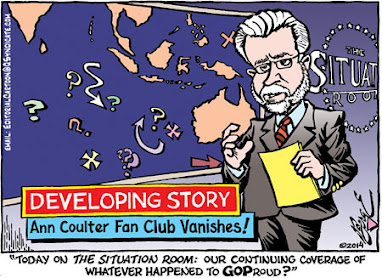 GOProud has vanished. The ultra-conservative gay Republican group was to Log Cabin Republicans what the Tea Partisans are to Establishment Republicans -- hardline, doctrinaire, and bitchy.


They outed a Rick Perry pollster in December 2011; they endorsed Mitt Romney, who opposed same-sex marriage; they got into social-media fights with all comers; and they called conservative activist Cleta Mitchell a “bigot,” not especially helpful considering she was on a board that would decide whether they could sponsor the Conservative Political Action Conference, a longtime GOProud goal.

The group split away from the Log Cabineers, who had failed to issue knee-jerk endorsements of Republican candidates who actively opposed gay rights. GOProud's legislative agenda for 2011 was virtually indistinguishable from that of other conservative Republican groups; only its opposition to a federal antigay marriage amendment separated it from the Family Research Council. Even the "Defending Our Community" section of their platform referred to opposition to gun control.

I've had second thoughts about sending this cartoon to Q Syndicate rather than the one about marriage equality in Wisconsin posted here on Tuesday. The Wisconsin cartoon has gotten a lot of positive response in spite of my concern that few readers outside of Wisconsin would recognize that it was based on the seal on the Wisconsin state flag.

But I worry that while readers may pick up the reference to the search for a missing airplane in this week's cartoon, they won't have any awareness of GOProud. GOProud may have seen themselves as Dorothy Parker, but in the end, they were Baby Jane Hudson.
Posted by Paul Berge at 7:58 AM No comments: 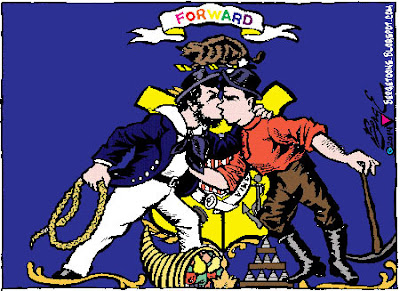 This is one of the preliminary sketches I made before deciding to go with a different idea for this week's Q Syndicate cartoon. I figured that outside of the state of Wisconsin, few readers would recognize our state seal.

It's just as well, since I see that the Wisconsin State Journal's Phil Hands has drawn more or less the same cartoon today. He's printed in papers around the state, and I'm not. The nearest papers running my cartoons are in Iowa and Michigan, two states whose state seals I couldn't describe without Google Imaging them.

Before seeing Hands's cartoon, I decided to go ahead and finish my sketch anyway. So here it is, for what it's worth. Enjoy.

Posted by Paul Berge at 7:45 AM No comments:

I came in to turn off the computer late last night after drawing this week's cartoon, and there was my idea proposal to my editors still sitting in my email waiting for me to hit "Send."

Blame it on the Benadryl.
Posted by Paul Berge at 7:43 AM No comments:

Q Toon: Who Let the Dogs Out? 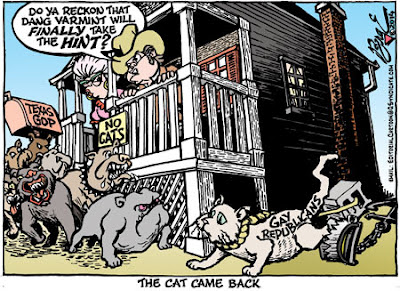 The Republican Party of Texas banned gay interest groups from having booths at the party's convention in Fort Worth this past weekend.


“It’s simply unconscionable that more than a dozen years since Log Cabin Republicans took the fight for gay equality against the homophobic fringe of the Party, the Texas State GOP still doesn’t get it,” LCR National Executive Director Gregory T. Angelo said. “We are your friends and neighbors; we are your colleagues and family members; above all else, we are loyal Republicans, and deserve a literal seat at the table at the Texas State GOP Convention."

And while the Log Cabin folks are ecstatic that the convention removed some of the most hateful language from the party platform, they do remind one of the guy who explained that the reason he was beating himself over the head with a two-by-four was that "It feels so good when I stop."

Posted by Paul Berge at 8:24 AM No comments:

Remembering the Class of 1989

A quarter century ago, there were students protesting for freedom in a place named for Heavenly Peace: 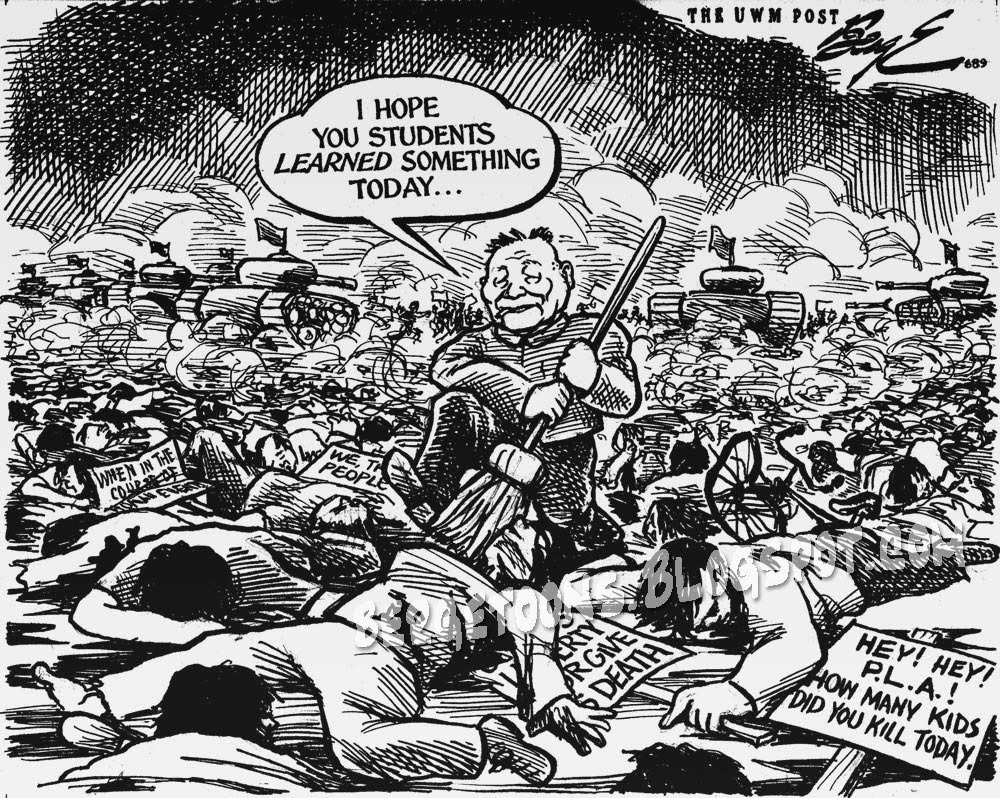 I don't imagine this blog is getting behind the Great Firewall, but here's to the Class of 1989 anyway.
Posted by Paul Berge at 7:12 PM No comments:

My cartoon may be a little late this week.

The dog ate my homework.
Posted by Paul Berge at 8:02 AM No comments: