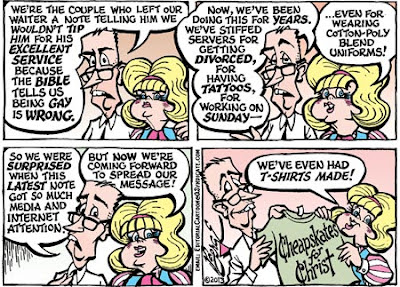 A couple weeks ago, Airport Dude made his third appearance in my cartoons. This week's cartoon marks a return of a One Million Mom character who appeared in my cartoons last June and August. She didn't even have a speaking part in her first appearance, but now I've committed to filling in her back story, I guess. For this cartoon, I had to figure out what her husband might look like.

Which is all to say that I don't really know who the couple that stiffed their waiter at a Kansas restaurant are or what they actually look like.


Instead of a tip, a couple who dined at Carrabba’s Italian Grill in Overland Park this week left a message for their waiter that has social media buzzing.
Said the message: "Thank you for your service, it was excellent. That being said, we cannot in good conscience tip you, for your homosexual lifestyle is an affront to God. [Antigay slur] do not share in the wealth of GOD, and you will not share in ours. We hope you will see the tip your [antigay slur] choices made you lose out on, and plan accordingly. It is never too late for GOD’S love, but none shall be spared for [antigay slur]. May God have mercy on you."

The anonymous waiter may have been flamboyant enough to trip this couple's gaydar, but even they admit right up front that his service was "excellent," and he has been thoroughly professional about the incident afterward. Although it came out early on that his mother is a manager at the restaurant, his name has not been made public, and he has not commented on the customers involved.

Perhaps this couple were drawing their own conclusions from the parable of the shrewd manager. If so, they stopped before arriving at Luke 16:15, in which Jesus tells his pharisee critics, “You are the ones who justify yourselves in the eyes of others, but God knows your hearts."

I suppose we could blame the boorish behavior of these so-called Christians on Fred Phelps's Westboro Baptist Church; they are 70 miles away, but they do get around. If they happen to be local people,they certainly can't expect excellent service at that particular Carrabba's again.
Posted by Paul Berge at 8:01 AM No comments:

At the last minute, I added "and internet" in this frame from this week's cartoon, just because many people think of "the media" as being limited to the printed press and television news. (Radio is also part of "the media," even though most of the blowhards on AM radio seem to think "the media" are someone else.) Do you define "the media" as anything between the sender and receiver of a message?

Discuss.
Posted by Paul Berge at 12:15 PM No comments:

Q Toon: Go Away. Kids, You Bother Me

It's late October, so whatever happens to be in the news is going to get the Halloween treatment by editorial cartoonists. So let's find something spooky about marriage equality coming to New Jersey: 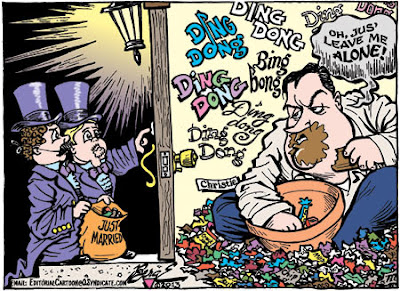 I seem to be on a kick of cartooning governors lately. This one's not so obscure outside of his own state, but I figured I had better squeeze in an identifying label, anyway.
Posted by Paul Berge at 8:17 AM 1 comment:

Well, if it isn't Cornelius Vanderbilt and J. P. Morgan at the door for a hand-out!

Have I gone all libertarian this week? Tune in Thursday for the next exciting installment.
Posted by Paul Berge at 8:35 AM No comments:

Turn Your Head and Cough

Drawing this week's cartoon (see yesterday's post), I was reminded of the last time I included a hernia check in a cartoon. 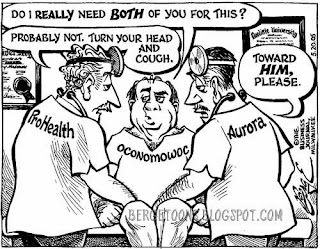 In May of 2005, I was drawing weekly cartoons to illustrate the editorials of The Business Journal of Greater Milwaukee. The editorial this particular week questioned the need for two proposed competing hospitals in the Milwaukee suburb of Oconomowoc, opining that either one or the other would be plenty, while having two would drive up costs. (One often assumes that competition would drive costs down, but not in the field of health care. There are redundant equipment, maintenance and administrative costs -- which hospital can offer the larger pay package to a prospective CEO? -- and patients generally don't shop around for the cheapest hospital the way they would for muffler repair or a can of soup.)

The BJ editors decided that they were uncomfortable with the suggestive cartoon I drew for them (above). Now, I can recall health care cartoons in a similar vein, such as one by the Indianapolis Star's Gary Varvel showing then-President Clinton pulling on rubber gloves to give Uncle Sam a rectal exam -- if you want to depict any health care issue as being somehow scary, go straight for the groin. I guess what plays in big, cosmopolitan Indianapolis doesn't necessarily play in little old homespun Milwaukee.

With the deadline already past for my cartoon, I hastily replaced my original approach with this hackneyed hunk of drivel: 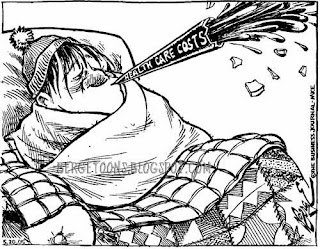 I don't think I even bothered to draw a pencil sketch of the replacement cartoon before inking it.

Both hospitals ended up being built anyway, incidentally.
Posted by Paul Berge at 10:31 AM No comments: 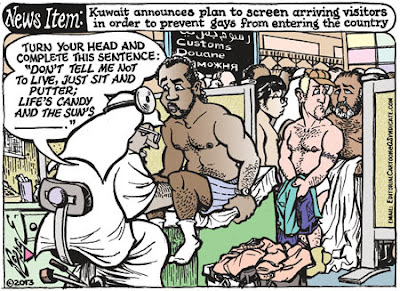 Kuwait has announced that it and other gulf emirates will institute medical test procedures to stop gays from entering their countries.


"Health centers conduct the routine medical check to assess the health of the expatriates when they come into the GCC [Gulf Cooperation Council] countries; however, we will take stricter measures that will help us detect gays who will be then barred from entering Kuwait or any of the GCC member states." -- Yousouf Mindkar, Director of Public Health at the Kuwaiti Health Ministry

Aside from Kuwait, the GCC member states are Saudi Arabia, United Arab Emirates, Oman, Bahrain, and 2022 World Cup host Qatar. There is already pressure to move the World Cup over this issue.

Meanwhile, how exactly the Kuwaitis intend to screen for The Gay has yet to be revealed. Those intrepid animators at Taiwanese News depict these medical test procedures as being even more invasive than I dared to.
Posted by Paul Berge at 7:57 AM No comments:

It's the return of Airport Dude!

Toon: Asylum of the Tea Party 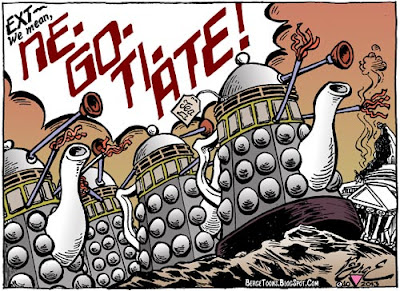 Yeah, negotiate. That's all they want.

I started watching Dr. Who during the Tom Baker years when WTTW out of Chicago showed the programme on Sunday nights. At some point, WTTW ran out of new episodes and aired several episodes from the Jon Pertwee years instead. After they started running new episodes, I kept watching until sometime in the Peter Davidson years when I got a second shift job that included a lot of Sunday nights, and I lost track of the show.

In those days, Daleks were all slate gray, so that's how I colorized them here. On Google Images, I see that they now come in a rainbow of colors, which just seems wrong. I just can't imagine there being a sensitive Dalek with a flair for design. Next thing you know, the Borg will start snazzing up their wardrobe.
Posted by Paul Berge at 8:14 AM No comments: 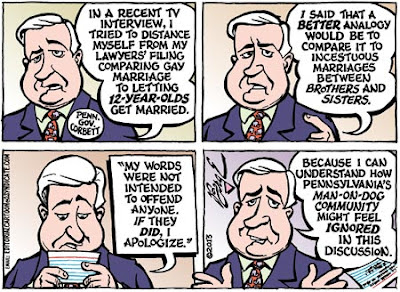 Sherry Christian of CBS Channel 21 in Harrisburg, Pennsylvania, interviewed Republican Governor Tom Corbett about a comparison one of his lawyers had made of same-sex marriage to allowing 12-year-olds to get married. "It was an inappropriate analogy," Corbett began. Then he continued:


"I think a much better analogy would have been brother and sister, don't you?"

Ms. Christian recognized immediately that Mr. Corbett had stepped in his own doodoo and politely declined to follow in his footsteps. 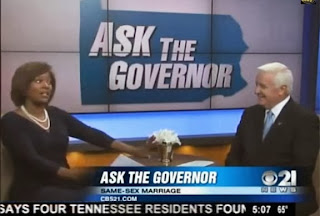 There are 50 governors in this country, and only a handful are known outside their own state. Caricaturing the lesser-known ones can be challenging. Pennsylvania Tom Corbett has a particularly bland face. Signe Wilkinson draws it rectangular; John Cole draws it somewhat elongated. It looks roundish to me, so that's how I approached it this time. I may never find reason to draw him again -- but then, perhaps he wants to step into Rick Santorum's shoes.

Not that Santorun's shoes are less caked in doodoo.
Posted by Paul Berge at 7:50 AM No comments: 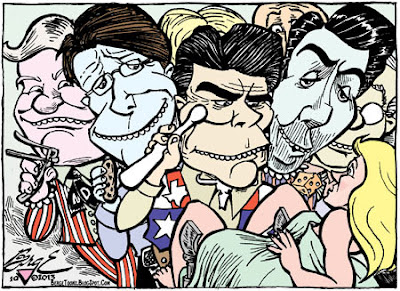 The Koch Brothers have an anti-health care ad which shows a young woman arriving at her gynecologist's office and telling her doctor that she has enrolled in "Obamacare." When she gets on the examining table and puts her legs up in the stirrups, the doctor leaves, and a really, really creepy big-headed Uncle Sam brandishing a speculum rises up between her legs.

I mean, really. Where did they get that Uncle Sam head, anyway? Was it a souvenir from when they were protesting against the Great Satan in the streets of Teheran in the 1980s?
Posted by Paul Berge at 8:08 AM No comments: 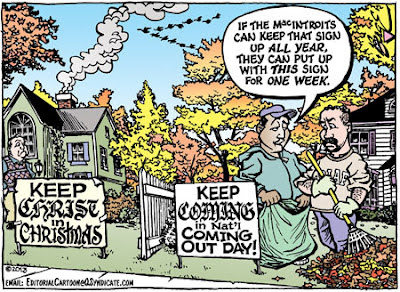 Mine may be the only cartoon on the AAEC web site today that is not about the federal government shutdown.

But it's fall! Time to enjoy the fall colors and off-color jokes! National Coming Out Day is just over a week away, so it's time to start getting into the spirit of the holiday, deck the halls, bake some pumpkin soufflé, dress up and prowl the neighborhood. Or am I thinking of the Folsom Street Fair?

By the way, check back for another cartoon here tomorrow!

Posted by Paul Berge at 6:54 AM No comments:

They Did Warn Us 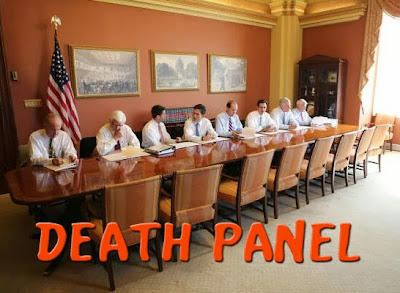 The Republicans did warn us there would be death panels, and sure enough...
Posted by Paul Berge at 8:16 PM No comments: