We're in for some good, wholesome family entertainment when this week's Q Syndicate cartoon comes out.
Posted by Paul Berge at 7:30 AM No comments: 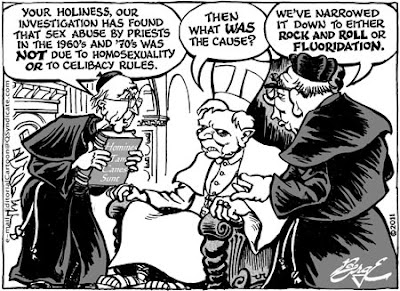 And if this turns out to have been a problem in the 1940's and '50's, we can always blame comic books and commies.
Posted by Paul Berge at 7:38 AM No comments:

Worldwide quakes and the Rapture having failed to materialize on schedule, we can now go back to criticizing mainstream religion.

Stay tuned.
Posted by Paul Berge at 4:06 PM No comments:

You Wanna See My ID? I'll Show You My ID!

The La Crosse Tribune the other day noted a striking dissimilarity between two of the Wisconsin Republican ruling party priorities:


•Why do the leaders of our state insist on making it more difficult to vote while making it easier to carry a weapon? Why do you have to show a photo ID to vote when, under one of the concealed-carry proposals, you can apply for a license by mail without proof of identification? ...
If democracy is at the forefront of the argument for concealed carry, how does that square with making it more difficult for people to vote in a state that has virtually no voter fraud, according to the nonpartisan Government Accountability Board? Those two concepts just don’t add up to a more democratic Wisconsin.

There were 488 gun-related deaths in Wisconsin in 2007 according to the Legal Community Against Violence (citing National Center for Injury Prevention and Control, U.S. Centers for Disease Control and Prevention, WISQARS Injury Mortality Reports, 1999-2007. This compares with a mere 20 instances of voter fraud in 2008 (and keep in mind that our Republican Attorney General, J.B. van Hollen, has been diligently working for years to prove the Republican myth of widespread voter fraud).

So clearly, making it tougher to vote than to carry a gun into a polling place makes a lot of sense.

The Tribune's other arguments against the concealed carry bills working their unstoppable way through the legislature have been heard before (although not by our gun-happy Republicans, who will hear none of it):

Under at least one of the proposals, someone convicted of a violent misdemeanor — stalking and battery, for instance — could carry a concealed weapon. Do we really think that will have a safe, healthy ending?

Posted by Paul Berge at 4:51 PM No comments: 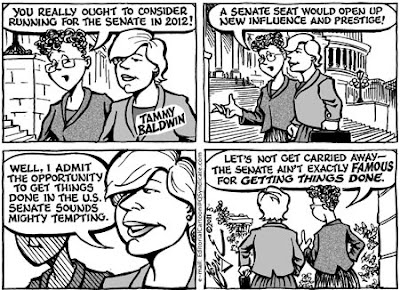 Curiously, I haven't drawn terribly many cartoons about Representative Tammy Baldwin, the first out lesbian elected to Congress. In part, that's because, like most cartoonists, I draw more cartoons that are critical of politicians than cartoons that say "Hey! Great job!" It's also because -- while she is no shrinking violet -- Ms. Baldwin doesn't spend nearly as much time on television or penning op-ed pieces for print journalism as some other congressmen do.

As such, she might be a fitting successor to retiring Senator Herb Kohl.

But because I haven't drawn her much, I haven't yet captured her caricature.

One of the first cartoons I drew about then-candidate for Congress Baldwin was for the cover of In Step Magazine, a now-defunct LGBT bi-weekly newspaper to whom I was a regular contributor in the mid-1990's. It was the year-end issue of the paper, and the drawing was a collage of faces and images in the news in 1997.

I thought this was a terrible likeness, but somebody on her staff liked it enough to secure my permission to use it on the cover of an invitation to a birthday party-cum-fund raiser for candidate Baldwin. (I forget how they got around that brush partly in front of her hair.)

I drew her again once she won election to Wisconsin's second congressional district -- this after House Majority Leader Dick Armey publicly referred to Massachusetts Democrat Barney Frank as "Barney Fag":

Posted by Paul Berge at 4:44 PM No comments:

With Wisconsin Senator Herb Kohl's decision not to run for another term, some LGBT activists and Emily's listserve are excited by the prospect that 2nd District Representative Tammy Baldwin might run for the seat. In news reports, her name usually appears in the paragraph that begins "Others mentioned as possible candidates are..."
Posted by Paul Berge at 8:40 PM No comments:

I could swear I posted this cartoon on Wednesday. In fact, I did. I linked to it from my Facebook page. 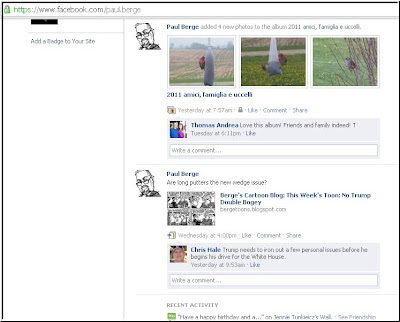 It must have been here yesterday for Chris Hale to comment on it, but somehow it disappeared from the internet since then. So here it is again. 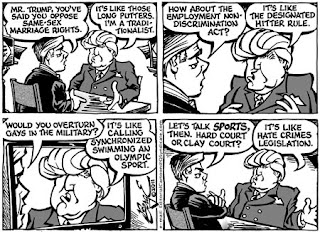 Unless it disappears again...
Posted by Paul Berge at 12:30 PM No comments:

After news event overtook last week's Q Syndicate cartoon, I was halfway worried that the Donald would announce at the end of yesterday's "The Apprentice" that the Republican party and the pundit class have all been Punk'd.
Posted by Paul Berge at 6:59 PM No comments:

The Lingering Effects of the Bush Tax Rates

After all, Obama has been in charge of the economy for over two years. Remember how he put an end to all of G.W. Bush's tax policies, unfunded wars, and Medicare Part D as soon as he sat down in the Oval Office?
Posted by Paul Berge at 7:36 AM No comments: 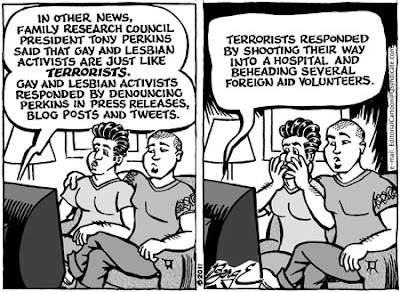 I was almost done drawing this cartoon Sunday night when I turned on the TV for the local news and instead found George Stephanopoulos, Christiane Amanpour and Mike Boetcher eagerly awaiting an announcement from the White House. They had already spilled the beans that Osama bin Laden was dead, and were filling the time by getting reactions from New York firefighters and 9/11 widows.

Clearly, terrorists this week were not going to give a rat's ass that the president of the Family Research Council said on April 29 that terrorists are just like LGBT activists.

The actual quotation isn't exactly as brief as one would like for a cartoon. He's talking here about gay and lesbian activists, boycotts against corporations that support antigay constitutional amendments and candidates, and publicizing the names of those who sign antigay petitions:


"This has moved from cultural terrorism to corporate terrorism. That's what this is. Now, back in the '80's and early '90's, I worked with the state department in anti-terrorism and we trained about fifty different countries in defending against terrorism, and it's, at its base, what terrorism is: it's a strike against the general populace simply to spread fear and intimidation so that they can disrupt and destabilize the system of government. That's what the homosexuals are doing here to the legal system."

At the risk of mockery from Editorial Explanations, I went ahead and finished the cartoon (I had nothing left to do but ink the background). By morning, I hadn't thought of any way to tweak the cartoon to take the previous night's news into account, so I sent it in to my syndicate for distribution. Q Syndicate, after all, is interested in providing LGBT content to LGBT publications, and would be less interested in the cartoon that I posted here yesterday.

And since I've brought up yesterday's cartoon, a few words about it.

A number of my friends posted that misquoted quotation of Martin Luther King yesterday, so I have to ask myself whether it was unseemly to crow about the death of an enemy. Looking back, I did not exult in the death of Saddam Hussein; and even though I would hold him responsible for the deaths of innocent Americans, Britons and Canadians, I probably wouldn't feel any elation over the death of Muammar Khaddafy were that to come to pass. How I would have felt about bin Laden's death if the U.S. had succeeded in bombing him to smithereens in 1998 I can no longer remember, although I would probably have forgotten his name by now. (Like that blind cleric who fomented the first bombing of the World Trade Center.)

Maybe it was the sheer scale of Al Qaeda's appetite for death and destruction. Maybe it is the lingering memory of Al Qaeda sympathizers exulting in the carnage of 9/11. Maybe it's the nagging feeling that we'd better celebrate while we may, because somebody somewhere is eventually going to do something horrible in retaliation.

Jesus' admonition to love one's enemies notwithstanding, I'm happy that bin Laden is dead and that it was Americans who dispatched him. And I just can't apologize for that.

And then there is Christian Broadcasting Network commentator David Brody, who not only let his heart rejoice over bin Laden's death, he actually criticized President Obama for not gloating, too:


"I know President Obama understands that getting Bin Laden doesn't mean an end to the war on terrorism but how about a smile? How about showing a little joy? How about a word or two saying something about how this is no doubt a happy or joyous occasion for Americans? We got nothing like that at all... Any hint of gloating or happiness might be rubbing it in the face of some of the crazies in the Arab World and heaven forbid we get them upset! How dare we Americans look like we’re celebrating his death! The travesty of it all! Give me a break. Isn’t it time to stop catering to thugs?"

Posted by Paul Berge at 7:15 AM No comments:

My hat is off to our United States Navy Seals. They did an excellent job Sunday night.

Hooyah!
Posted by Paul Berge at 7:28 AM No comments:

Posted by Paul Berge at 7:05 AM No comments: