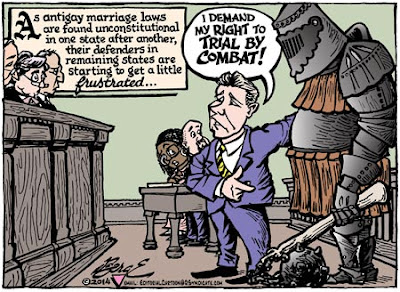 This week's cartoon may have been inspired by Game of Thrones, but I didn't want to cast Peter Dinklage in the starring role. Instead, I cast Wisconsin Republican Attorney General J.B. Van Hollen as the lawyer, even though I'm not currently running in any publications in my home state.

I happened to watch Mike Gousha's interview with Van Hollen in which Van Hollen said that he was pushing ahead with his defense of Wisconsin's Mixed Marriage Supremacy amendment. (Gousha's program comes on about the time I am usually almost done inking my cartoon on Sunday night.) In the interview, Van Hollen admitted that Wisconsin's amendment was virtually certain to be found unconstitutional, just like similar provisions in Oklahoma, Oregon and Pennsylvania days before.


Gousha: "In a lot of courts around the country, these laws banning same-sex marriage are being struck down. Why do you feel Wisconsin will be different?"
Van Hollen: "Well, I don't necessarily feel it will be different. But it's still my obligation. ... Those laws have lost across the country. I certainly won't be at all surprised if we lose in our court here as well."

In the end, Van Hollen hopes that the U.S. Supreme Court will come to the rescue of states who want to deny marriage to same-sex couples.

Meanwhile, Van Hollen has refused to defend Wisconsin's domestic partner registry, passed in the 2009 budget and signed by then-Governor Jim Doyle. Van Hollen believes that the domestic partner registry is unconstitutional. The circuit court ruling that the registry is legal was upheld unanimously in District 4 Court of Appeals in December, 2012.
Posted by Paul Berge at 8:25 AM No comments: 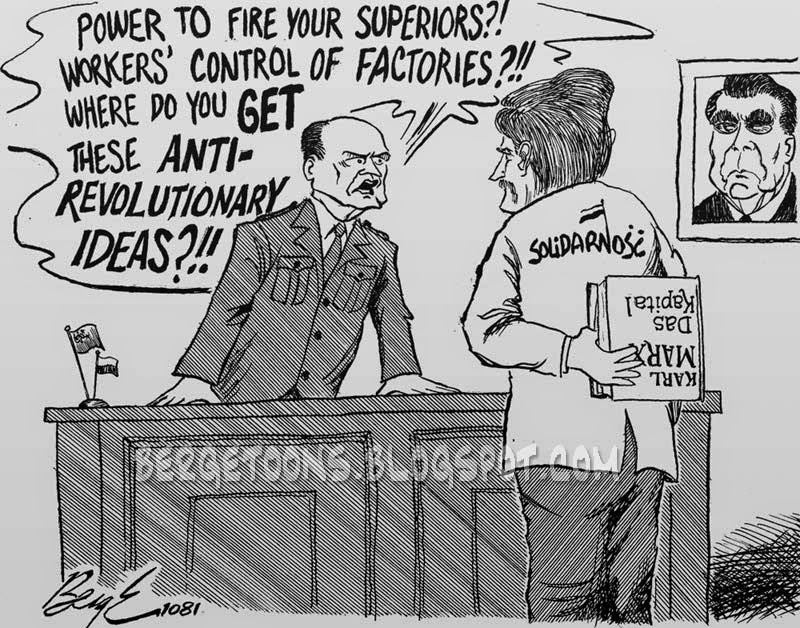 General Wojciech Jaruzelski, the last Communist leader of Poland, died on Sunday -- and there is some controversy over whether to bury him in Powazki Cemetery with other Polish soldiers. That's the plan, although there will be no state funeral for him.

Since we are coming up on the 25th anniversary of the fall of Communism in Central Europe later this year, here are a couple of the cartoons I drew about General Jaruzelski in the 1980's.

Back when these early cartoons were drawn, I had a usually unfortunate tendency to draw stiff, flat bodies -- which was, in Jaruzelski's case, the perfect way to draw him. Ever rigid and unyielding, he held himself as if he were posing for his own statue. 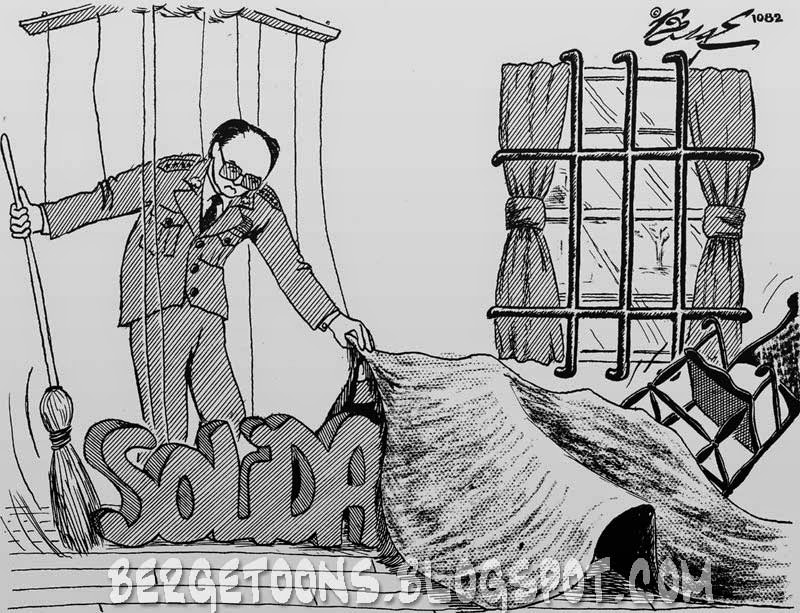 The second of these cartoons is from October of 1982, as Jaruzelski's tightened his continuing martial law over his country. Given the history of Russia's imposition of its will on Hungary and Czechoslovakia in 1956 and 1968, that might have been the end of the story. But by 1989, it was the rigid, unyielding Jaruzelski who was forced to bend. 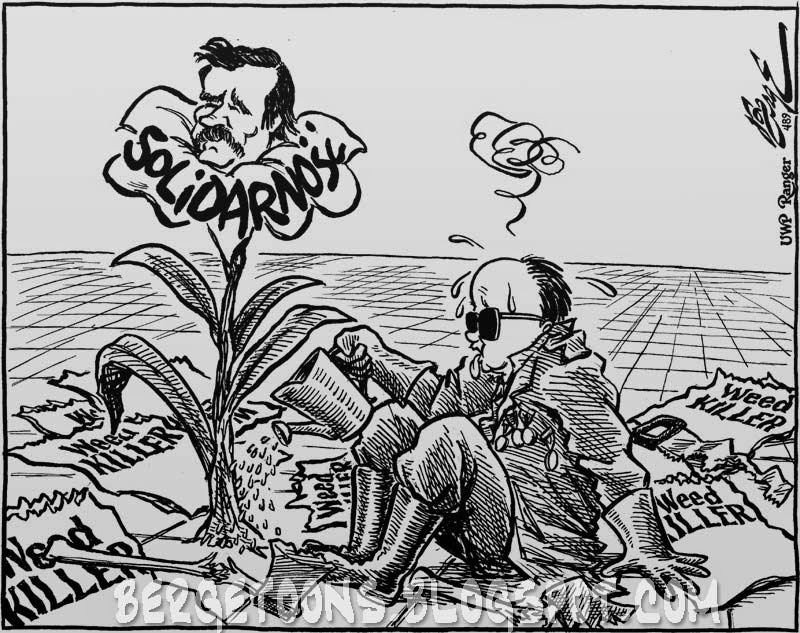 Posted by Paul Berge at 8:01 PM No comments:

Please take a few moments today to remember how the freedoms we Americans enjoy today have been bought and maintained.

I'll be back later this week with the rest of this cartoon.
Posted by Paul Berge at 8:53 AM No comments:

A Kiss Is Still a Kiss

A reader is disappointed that I failed to include Marc Chagall's The Birthday Kiss in this week's cartoon. 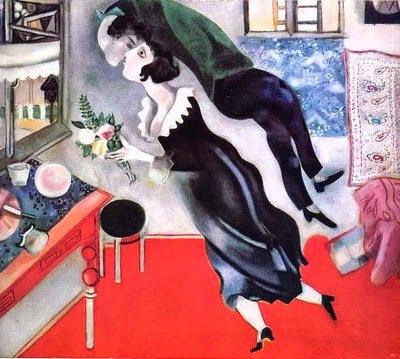 If anything kiss-related is going to require extensive explanation to children, this is it.
Posted by Paul Berge at 1:23 PM No comments:

Email ThisBlogThis!Share to TwitterShare to FacebookShare to Pinterest
Labels: #KissIn

Q Toon: You Must Remember This 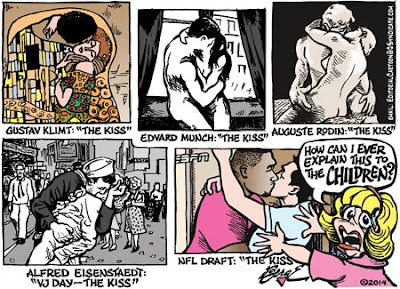 Well, I went ahead and cartooned about The Kiss anyway this week.

People like ex-Giant Derrick Ward have been stunned to find out that not everyone finds it "disgusting" that Michael Sam would kiss his boyfriend, Vito Cammisano: "Man U got kids lookin at the draft. I can't believe ESPN even allowed that to happen." Happily, this attitude is not universal in the NFL (although there was also Dolphin Don Jones, who was briefly suspended and issued an apology for tweeting that Sam and Cammisano's celebration was "horrible.")

Dallas TV host Amy Kushnir stormed off the set of a local The View-esque TV show when she didn't get unquestioned agreement with her disgust. “When parents do not have a choice about whether or not they want their children to see this, it is wrong…I don’t call it a moment of celebration."

Said Kushner, "I would have said, 'Get a room!' I don't want to see cake on your faces." All but saying that some of his best friends are gay people, Ward tweeted before running out of characters: "No matter if he's gay or not. I could careless. Shoving cake into your significant others face then deep" (In a subsequent tweet, he completed the thought that Sam and Cammisano had gone "overboard.")

Mixed-sex couples pushing cake onto each other's faces has been a staple feature of every wedding reception I've ever seen . I guess Sam and Cammisano were trying to destroy the sanctity of marriage with that bit of Gay Agenda.

Now Kushnir is defending herself on Fox News, where her right to free speech is protected because nobody  there is going to contradict her. And Ward is claiming that he never said that he would begrudge Sam a little peck on the cheek, like heterosexual athletes do, but going at it like you mean it was just too much for Ward's delicate sensibilities.
Posted by Paul Berge at 8:31 AM 1 comment:

Perhaps you can see where this is going already.
Posted by Paul Berge at 4:28 PM No comments: 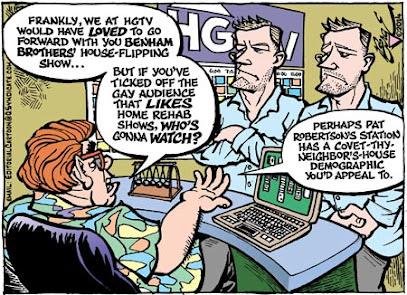 There was no shortage of LGBT news stories to cartoon about when I sat down at the drawing board this weekend. I'm glad I didn't try to come up with something about Clay Aiken's narrow lead in the North Carolina 2nd CD election which might have gotten into poor taste when the other candidate suddenly died.

Speaking of sensational singers, Conchita Wurst, a gender-bending Austrian contestant, won the current season of Eurovision, a televised singing contest, to the shock and horror of the Russian government. No kidding.

And of course, there was also the big story of Michael Sam receiving the news that he'd been drafted by the St. Louis Rams and kissing his boyfriend on live TV. So much has been said about The Kiss this week that there is little chance that anything I drew would not already have appeared somewhere else in the media. Even the Benham Brothers weighed in on it. Besides, I've already drawn about Michael Sam this year.

Who are the Benham Brothers? Why, they're the subject of this week's cartoon. Cable channel HGTV had planned to launch a house-flipping series about the telegenic twin real estate speculators. Then Right Wing Watch pointed out David and Jason Benham's antigay political activity, David, for example, had organized a rally against the 2012 Democratic National Convention in Charlotte, North Carolina to protest "demonic ideologies" such as "a homosexuality and its agenda that is attacking the nation."

HGTV decided it didn't want to associate with the Benhams any more, and the Vast Right Wing Conspiracy went livid (until distracted by The Kiss). But shed no tears for the Benhams, who are sure to successfully peddle their series to any of the various Christianist cable channels out there.

Posted by Paul Berge at 8:26 AM No comments:

All will be revealed later this week.
Posted by Paul Berge at 3:58 PM No comments:

Q Toon: From Moscow With Love 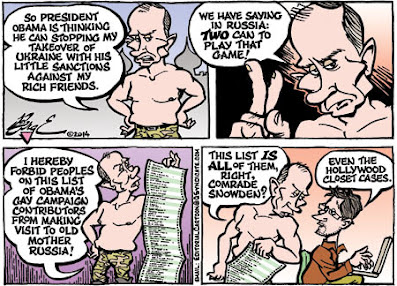 
The names of the specific bundlers remains a secret, but a focus was put on those with ties to the gay and lesbian community; it’s a reflection of the ongoing fight between the Kremlin and the White House over Russia’s laws punishing the promotion of LGBT “propaganda.”

(By the way,there was something just a little bit off about the photo of Putin at the Advocate's repost of the story. It eventually dawned on me that it was a photo of the Putin at Madame Tussaud's Wax Museum.)

There is no word whether Senator Lindsey Graham is still allowed to travel to Moscow.

Happy Cinco de Mayo to all my gringo readers!

Contrary to popular misconception, Cinco de Mayo is not Mexican Independence Day -- that's actually September 16. It's the anniversary of the Mexican army's victory over French forces in the Battle of Puebla in 1862.

But the date provides an excuse for Americans who have recovered from their Derby julep hangover to binge on margaritas and shots of tequila.

Mexicans, in turn, celebrate Twelfth of August, commemorating the end of the Spanish-American War, by wearing Uncle Sam hats and flocking to McDonald's to drink Manhattans.
Posted by Paul Berge at 8:37 AM No comments: 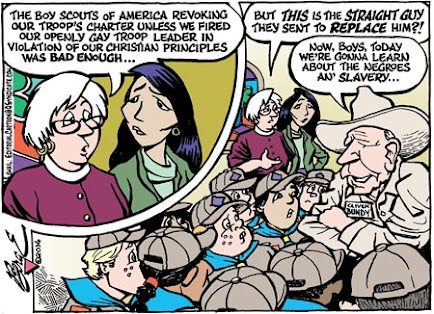 When the Boy Scouts of America relented last year from its policy of banning gay boys from scouting, there was a lot of phony concern that somebody was trampling on the religious convictions of homophobes.

The BSA's ban on openly gay adults serving as scout leaders remains in place. When it came to light that Geoff McGrath, a gay former Eagle Scout, had accepted the post of scoutmaster of Troop 98 outside Seattle, Washington, the national organization came down hard on the United Methodist Church sponsoring the troop. The national BSA booted McGrath from his leadership position and revoked the troop's charter.


We didn’t choose Geoff McGrath as a political statement. We chose Geoff because he was the perfect person for the job, an Eagle Scout himself, and someone who has a Master’s degree in Social Work. He has mentoring and leadership skills that someone taking on this role needs. A perfect fit. Geoff was quite willing, to serve as scoutmaster but was also nervous that his being gay would pose a problem for me and for the congregation. I assured him that putting him in the leadership of this troop would reflect and live out the values of our congregation, and that we would not have a troop at Rainier Beach UMC unless it was fully inclusive, because that is who we are. ...

Our congregation is the chartering organization for the troop, and yet I, as the pastor, had no contact from the BSA when they told Geoff that he was kicked out as a leader. Further, the BSA asked me and the congregation to violate our conscience and our religious beliefs by removing him as a leader of the Boy Scout troop when we know he is the most gifted for the leadership of the troop we chartered.