Q Toon: None So Blind As One Who Tennessee 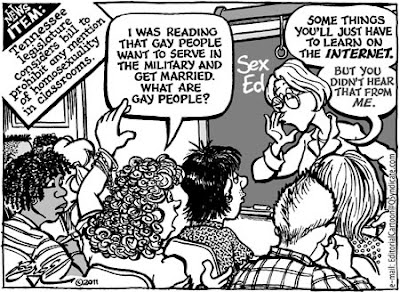 To be fair, what the legislation up for a vote in Tennessee actually says is that teachers in grades kindergarten through grade 8 would be forbidden from any deviation from the assigned sex education curriculum. (There will be no problem finding a curriculum that avoids any mention of homosexuality. Heck, the Texas School Board has probably devised a sex education curriculum that avoids any mention of sex.)

I look forward to future legislation prohibiting teachers from deviating from assigned curricula for math, spelling, and, of course, science. We wouldn't want curious students to find out about evolution or climate change before they can be indoctrinated against them, and the same goes for imaginary numbers and rules for apostrophe usage.
Posted by Paul Berge at 7:18 AM No comments:

Many kids around the country are on spring break this week, but not the kids in this week's Q Syndicate cartoon. They're stuck in school trying to get a sex education, poor things.
Posted by Paul Berge at 7:13 AM No comments:

Last week, L.A. Lakers star Kobe Bryant objected to a referee named Bernie Adams benching him for a personal foul. As Bryant sat down on the sidelines, he called Adams an offensive name. Let's just say that the word has nothing etymologically to do with "fang."

The National Basketball Association smacked Bryant with a $100,000 fine, which Bryant is appealing. He issued what he hoped would pass for an apology, saying that he didn't mean the insult literally. While some may have been relieved that Bryant was not hallucinating sexual acts underway on the basketball court, very few were impressed by the apology. 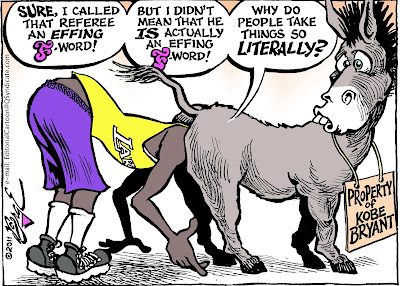 The best and most authoritative commentary on Bryant's outburst and apology was by John Amaechi in the New York Times:


Many people balk when L.G.B.T. people, even black ones, suggest that the power and vitriol behind another awful slur -- the N-word -- is no different from the word used by Kobe. I make no attempt at an analogy between the historical civil rights struggle for blacks in the United States with the current human rights struggle for L.G.B.T. people, but I can say that I am frequently called both, and the indignation, anger and at times resignation that course through my body are no greater or less for either. I know with both words the intent is to let me know that no matter how big, how accomplished, philanthropic or wise I may become, to them I am not even human.

In case it needs to be said, Amaechi is both gay and black, as well as a former NBA player.


A black person is called a [niggard] precisely and exclusively because he is black. Period. And the core of the word's offense -- and racism -- stems from this sheer conspicuousness. I've been called a [niggard] more than once, and there’s no doubt it was because of the color of my skin, not because I'd pissed someone off.

We cannot necessarily say the same thing about Kobe's -- or perhaps anyone's -- use of [fang]. Yes, the word is loaded with offense and has been a centuries-long tool of homophobes. But unless we're certain Bryant expressly chose this word to specifically dis Adams' sexuality, this charge of homophobia doesn't hold up.

I've discussed the controversy over comparing the fight for LGBT citizens' rights to the struggle for black citizens' rights before. That's a serious issue, but this pissing contest over whether [niggard] or [fang] is a worse epithet is mighty stupid. ("Nobody calls white folks [niggards]!" "Oh, yeah? Well nobody shows up at black folks' funerals shouting that God hates [niggards], either!")

When the Westboro Baptist Cult protests at the funeral of a U.S. soldier, or Elizabeth Edwards, or any other straight person, waving their pickets about how God Hates [Fangs], is their assholery to be excused -- is their insult even the least bit blunted -- by the fact that the person in the casket was not, in fact, gay?

No. And it wouldn't have been any less outrageous if Bryant had called Adams a word not etymologically related to "count."
Posted by Paul Berge at 6:37 AM No comments:

This week's cartoon has nothing to do with that.

Nor does it have anything to do with the Democratic Party.
Posted by Paul Berge at 4:12 PM No comments: 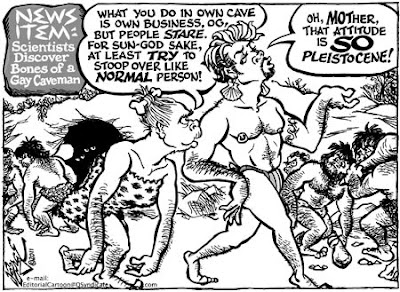 Turning to one of the lighter stories in the news, we learn this week that anthropologists unearthed the bones of a male near Prague who had been buried 5,000 years ago in a manner that was typical of females of the period.

"We found one very specific grave of a man lying in the position of a woman, without gender specific grave goods, neither jewelry or weapons," reported the [Czech Archeological] Society's Kamila Remisova Vesinova. "So we think based on data that it could be a member of a so-called third gender, which were people either with different sexual orientation or transsexuals or just people who identified themselves differently from the rest of the society."

Initial reports concluded that the bones were that of a gay caveman. Naturally, many anthropologists have disputed that conclusion. In the first place, the cave-dwelling era was more than 5,000 years ago, and the term "gay" only dates from Stonewall (which was a gay bar in 1969, not a cliff face where cavemen went to cruise each other). From CNN:


[W]hile acknowledging the "unusual" circumstances of the burial, [UW-Madison associate professor of anthropology John] Hawks said there is no way you can tell someone is homosexual by examining a skeleton.

Instead, the possibility of a third-gender grave -- as outlined by the archaeologists -- is more plausible, he said, noting that some cultures have a third category where, in some cases, men may have feminine characteristics or roles.

So I apologize to any anthropologists, insurance spokesneanderthals and editorialexplanations fans who object to my use of the term "gay" in the "News Item" box in this week's cartoon.

I should have written "queer."
Posted by Paul Berge at 7:52 AM No comments:

This week's cartoon was so easy, even a caveman could do it.

Perhaps the Club for Growth is somewhere in there.
Posted by Paul Berge at 7:36 AM No comments:

Bruce Murphy has a great piece in Milwaukee Magazine on the latest move by Governor Scott Walker to destroy Wisconsin's education system. Having gotten legislative approval (on hold by the courts) to devalue public school teachers, to tie school districts' hands when working out their own budgets, and to increase the diversion of Milwaukee public school money to private "choice" schools, he now wants to remove all accountability by those choice schools.

While public schools are required to administer standardized tests to all students to measure whether children are learning anything, Walker proposes that choice schools should no longer be required to do the same. He must want to cover up results like this:

Granted, as Murphy points out in the third part of his column, some choice schools, particularly Notre Dame Middle School, actually score above the state average. But I'd be surprised if even one public school did as badly as the six named above.

Meanwhile, as pointed out in another article today by Dave Zwiefel for the Capitol Times, Walker and the Republicans are following the Chamber of Commerce directive to deregulate business, depress wages, and shift the tax burden from those who make money to those who work for it. The Chamber, and their Republican minions, say that Wisconsin has a bad business climate. They would like to refashion Wisconsin in the style of, say, Mississippi.

[I]n its wisdom the U.S. Chamber ranked the state of Mississippi high on its list of places with good labor and employment policies.

Never mind that according to the U.S. Census Bureau, Mississippi has the lowest per-person income in the country and the lowest life expectancy. Its education system is ranked 47th among the 50 states and the Annie E. Casey Foundation, which measures states on how well their children are treated, says that Mississippi is the worst state in America.

Cheer up, Mississippi! As long as Scott Walker and his Republican legislature have anything to say about it, Wisconsin is joining the race to the bottom!
Posted by Paul Berge at 10:42 PM No comments: 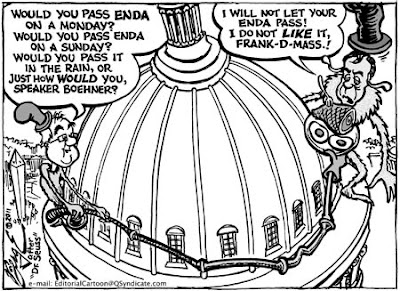 Rep. Barney Frank (D-MA) will reintroduce the Employment Non-Discrimination Act into the current Congress, although he concedes that it has virtually no chance of passage in the current Republican-majority House.

I wanted to draw the Capitol dome in the style of Theodor "Dr. Seuss" Geisel, author of Green Eggs and Ham. His editorial cartoons for PM during World War II were drawn with the same whimsy and fantastic imagery that he used in his children's books. His GOP elephants look like Horton (of Who-hearing fame); his eagles more closely resemble sneetches than any eagle you've ever seen. Improbable machines and strange landscapes are common.

But the one and only drawing I found of the Capitol building was in the background of a November 18, 1941 cartoon, and is squarely representational:

Here I had visions of the dome topped with a lazily drooping attic and Wendy Who holding a torch aloft. In my minds eye, it looked so Seussian. On paper, I'm afraid it just looks like I don't know a thing about perspective. (Sketching and resketching the cartoon, I gradually shoved the figure atop the attic up and out of the cartoon frame.)
Posted by Paul Berge at 7:20 AM No comments:

Maybe I'm just not reading the right blogs, but it seems like all the LGBT news stories are stuck in a rut. Civil Unions legislation makes headway here, is set back there. Republicans are still griping about the end of Don't Ask, Don't Tell, which has sort of not happened yet. Pvt. Bradley Manning is still being forced to sleep au naturel. Rick Santorum is still synonymous with lubricated fecal matter.