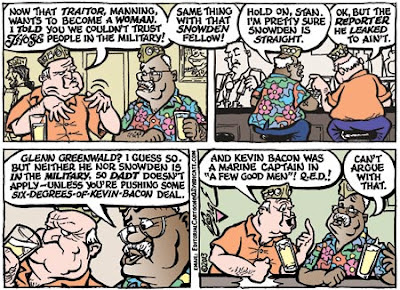 The process of coming up with ideas for my cartoons usually involves juggling two or more unrelated concepts and seeking out the unexpected commonalities between them. This cartoon is what you get when the process simply doesn't come together nicely by deadline.

I just didn't have room for the added connection of Cuba Gooding Jr. appearing in drag in "Boat Trip."
Posted by Paul Berge at 7:38 AM No comments:

I guess the papers subscribing to my cartoon through Q Syndicate received the initial version of last week's cartoon I'd sent in rather than the corrected version I sent moments later.

The only difference is that I noticed after sending the cartoons that I'd forgotten to shade in the "No" on the "No Vacancy" sign.

Yeah, it's a small enough thing, but it's enough to bug me.
Posted by Paul Berge at 7:42 AM No comments: 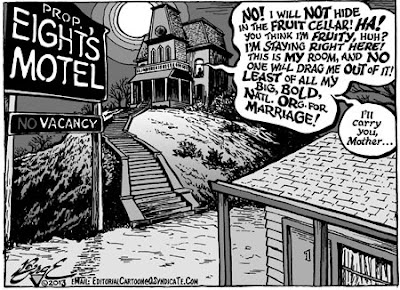 Last week, the California Supreme Court put an end once and for all to antigay Proposition 8, refusing to hear an appeal by the amendment's sponsors that it had been unconstitutionally overturned.

Initially, I had developed an idea for this week's cartoon that would have been set in a cemetery; and I was all set to send the proposal to my editors when I realized that I had just drawn a cemetery-themed cartoon a month or two ago. It seemed too soon to return to that venue, so I continued in search of something else.

This idea probably came to mind because a Facebook conversation with fellow Q Syndicate cartoonist Dave Brousseau about Alfred Hitchcock just days before was lurking just behind the shower curtain of my subconscious. There are other, more obvious films I could have referenced -- but I didn't feel like depicting the California Supreme Court as munchkin coroners. I'm sure the justices will understand.

Speaking of understanding, I'm hoping that editors don't mind that I didn't provide them with a full-color version of this cartoon. That would have been sacrilegious.
Posted by Paul Berge at 10:35 AM No comments:

Oh, goody! They still have a room here! I could use a nice, warm shower.
Posted by Paul Berge at 1:07 PM No comments: 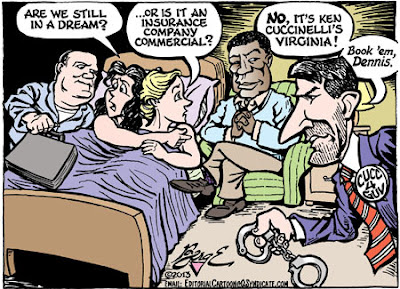 I do not envy the voters of Virginia. The Republican gubernatorial candidate is their Attorney General, Ken Cuccinelli, a rabid homophobe. He still wants to enforce Virginia's anti-sodomy laws, despite their being unconstitutional under Lawrence v. Texas, on the grounds that they protect children -- the lack of any mention of age in the law notwithstanding.

Also notwithstanding is Virginia's age of consent -- 15 -- which is relevant here because the specific case Cuccinelli is upset about concerns a 47-year-old man, William McDonald, arrested for having consensual oral sex with two girls aged 16 and 17 at the time. Old McDonald may be guilty of being a creep, but not of statutory rape.

While anti-sodomy laws occasionally come into play in cases like McDonald's, they have been used much more often to persecute LGBT citizens. It's useful to note what Virginia's law actually criminalizes:


Virginia outlaws consensual sexual behavior between adults with 18.2-361, "Crimes against nature." This prohibits the making or consenting to such sexual contact a Class 6 felony, punishable by a term of imprisonment not less than one year nor more than five years, or a confinement in jail for not more than twelve months and a fine of not more than $2,500, either or both.
Virginia also bans voluntary sexual intercourse between unmarried persons with code section 18.2-344 - Fornication. ...
Lewd and lascivious cohabitation is also prohibited in Virginia and is punishable as a Class 3 misdemeanor upon a first successful conviction which carries a fine of not more than $500. ...

So anyway, Cuccinelli wanted the Supreme Court to engage in what conservatives otherwise call Judicial Activism by pretending that Virginia's unconstitutional anti-sodomy laws still apply when 16-to-17-year-olds (but why stop there?) are involved.


Cuccinelli decided to appeal the case to the Supreme Court, arguing that Virginia’s anti-sodomy statute has no constitutional problem, if—as he concedes, and only if—the high court would just interpret the terrifyingly broad sodomy law to apply only to sex involving 16- and 17-year-olds. (Justice Kennedy left the thread of that argument hanging in his majority opinion in Lawrence.) In effect, Cuccinelli’s legal appeal asks the Supreme Court and the lower courts to ignore the clear meaning and intent of the law, to interpret it in a way that advances narrow goals he wants to advance.
Of course, Cuccinelli’s problem at the Supreme Court is that Virginia’s sodomy statute doesn’t mention age, so reading an imaginary age requirement into it is not “interpreting” the statute so much as rewriting it.

In 2004, the year after Lawrence v. Texas, there was a bipartisan effort to update Virginia's anti-sodomy law by removing the unconstitutional provisions against adults who engage in consensual sexual acts in private (leaving public sex, prostitution and so forth as criminal acts). Mr. Cuccinelli, then in the state Senate, opposed the bill in committee and helped ensure its defeat. As he told the Virginian-Pilot in 2009, "My view is that homosexual acts, not homosexuality, but homosexual acts are wrong. They’re intrinsically wrong. And I think in a natural-law-based country it’s appropriate to have policies that reflect that."

Still, even if you don't like Cuccinelli's obsession with gay sex, it's hard to get enthused about the Democratic alternative, party hack Terry McAuliffe. Which is exactly how Republicans get elected. Their base gets enthused about wingnuts like Cuccinelli and his running mate, E. W. Jackson. Look for a landslide Republican victory with about 92% of Virginia citizens staying home.

And bolting the bedroom door.
Posted by Paul Berge at 10:42 AM No comments:

Slate has a not-to-be-missed article today about the mid-20th Century cartoonist Jackie Ormes and her "Patty-Jo 'n' Ginger" panel cartoon.

Ormes drew in the 1940's and '50s for the Pittsburgh Courier, an African-American newspaper whose circulation peaked at 200,000. No "Amos 'n' Andy" here, the examples in the article are quite topical -- I'd go so far as to call them editorial cartoons. Ginger is a fashionable young lady, playing straight (wo)man to Patty-Jo, a sassy child wise beyond her years.

I have to wonder -- perversely -- whether in her naming of the mostly silent Ginger, Ormes was in some way trying to co-opt or de-fang that vulgar racist word for which "Ginger" is an anagram. Or am I reading too much into it?

Do read Rebecca Onion's Slate.com article, and check out Nancy Goldstein's biography of Ormes here.
Posted by Paul Berge at 12:29 PM No comments:

Well, isn't it about time I got around to drawing a cartoon about President Palmer?
Posted by Paul Berge at 4:14 PM No comments: 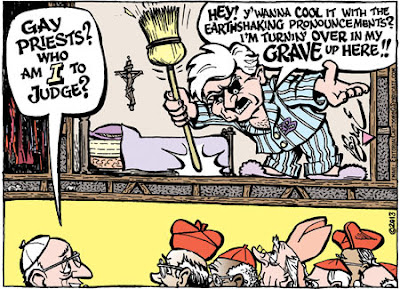 Can two celibate men share the Vatican without driving each other crazy?
Posted by Paul Berge at 10:11 AM No comments:

If you were disappointed that last week's cartoon was about boycotting Russian vodka instead of about some bigger story in the news, I pray you have some patience with a poor lowly ink-slinger.

By the way, in today's report on visitors to this blog, the number of Russian readers has suddenly plummeted to single digits. On the other hand, there has been a stunning surge in visitors from Latvia. Sveiki, all 98 of you!

In the meantime, look up and live!
Posted by Paul Berge at 1:04 PM No comments: