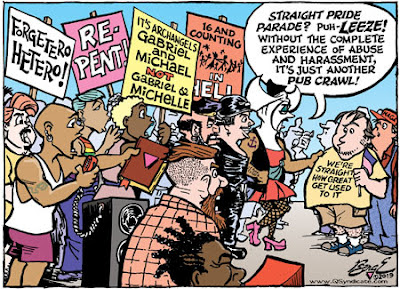 So some bunch of heterosexual white dudes has announced plans to hold a Straight Pride parade in Boston in August. Their parade will no doubt celebrate how the straight cis white male community has overcome prejudice, religious persecution, employment discrimination, parental rejection,  straight-bashing, mullets and the New Coke crisis to win equal rights in a just society.

Unable to convince Brad Pitt to be their parade marshal, they settled for Milo Yiannopoulos, which is only fair, I guess. Many an LGBTQ Pride parade has had as its marshal a straight person with a predominantly gay following, so it's fitting that a Straight Pride parade should have as its marshal a gay person with a predominantly straight following.

But, hey, let 'em go ahead and have their fun. May they enjoy the thrill of the purity of their movement now, before commercialism takes over and the true meaning of Straight Pride gets lost amid the sales of overpriced tee shirts, jewelry and keychains emblazoned with the Chik-Fil-A logo.
Posted by Paul Berge at 7:31 AM