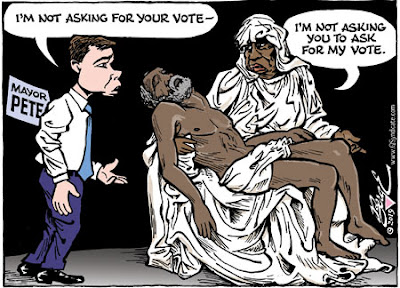 Presidential candidate and Mayor of South Bend, Indiana, Pete Buttigieg interrupted his campaign to deal with a police shooting at home:


Eric Jack Logan, 54, was killed in South Bend after someone called police to report a suspicious person going through cars, according to the St. Joseph County Prosecutor's Office.
A police officer confronted a man in a vehicle at an apartment building parking lot. The man, later identified as Logan, got out of the vehicle and allegedly approached the officer with a knife raised, and the officer opened fire, the prosecutor's office said. Logan died at a hospital.

The officer, Sgt. Ryan O'Neil, was equipped with a body camera, but didn't turn it on, so we are left to trust his word over that of the deceased.

Because police Sgt. O'Neil is White and Mr. Logan was Black, the incident has inflamed racial tensions between the African-American community and the South Bend Police Department. Police-community relationships have been a sore point since very early in the Buttigieg administration. Three months after Buttigieg took office, a scandal broke over racist language police officers used in wiretapped phone calls, and Mayor Pete responded by firing three police officers and demoting South Bend Police Department Chief Darryl Boykins, who is Black.

In the years since, Black citizens have complained about abusive treatment by SBPD officers; a Latina mother was killed when an officer, without lights or siren on, was chasing a reckless driver and crashed into her car; and officers shot and killed another knife-wielding person of color in April of last year. Another SBPD Chief failed to come to the aid of an officer breaking up a fight at the city's Martin Luther King Center in 2013, even though the Chief was present at the Center.

In all these incidents, members of the community felt that the police individuals involved got off scot-free or with no more than a slap on the wrist. And when, after this latest incident, Buttigieg met with members of the Black community, the crowd let him know whom they held responsible.


Shirley Newbill, Eric’s mother, asked Buttigieg and the city to act on her son’s death.
“I have been here all my life, and you have not done a damn thing about me or my son or none of these people out here,” she said. “It’s time for you to do something.”
At one point, a woman at the rally told Buttigieg," You're running for president and you want black people to vote for you? That's not going to happen."

Following that rally, Buttigieg and the current Chief of Police, Scott Ruszkowski, tried to hold a formal Q&A with city residents. That didn't go smoothly, either.


Many made sure their voices were heard, often shouting over the mayor’s answers, calling him a liar or demanding that Ruszkowski be fired. When the crowd was asked to hold its anger, Komaneach Wheeler stood up and shouted “A mother of injustice cannot hold her anger!”
Some of the questions were pointed squarely at Buttigieg, whose run for president has put the Logan shooting and ensuing reaction in the national spotlight.
“How can we trust this process?” Blu Casey, a local activist, asked the mayor. “How are we supposed to trust you?”
Buttigieg at one point admitted that he had failed to bring greater diversity to the Police Department, where 5% of the officers are African-American, though he said it wasn’t for a lack of effort as he mentioned some initiatives the city undertook or is exploring.
“I promise you, we have tried everything we can think of,” he said.

For the small city mayor who thinks he's ready to be President of the United States, this will be the test that either substantiates or disproves that belief.

Because this is not just a South Bend, Indiana issue. Elsewhere this week, the mainstream media took note of exposure by the Plain View Project of racist and hateful remarks law enforcement officers in eight major cities have made on social media. We saw video of Phoenix, Arizona police pulling guns on a young Black family of four and screaming obscenities at them as if it were a case of the family shooting up a school instead of shoplifting a doll and a t-shirt from a Dollar Store. "Shooting Bias," the greater tendency of police to fire at Black civilians than at White ones, rates its own Wikipedia page.

Expect this topic to come up at tonight's Democratic Candidate Cattle Call.

Don't expect many African-Americans to be satisfied with what is said on the stage.
Posted by Paul Berge at 7:26 AM