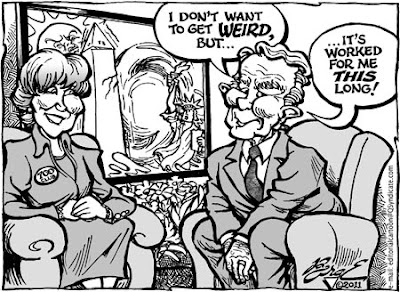 Pat Robertson "doesn't want to get weird," but he just can't help it.


"Ladies and gentlemen I don’t want to get weird on this so please take it for what it’s worth. But it seems to me the Washington Monument is a symbol of America’s power, it has been the symbol of our great nation, we look at that monument and say this is one nation under God. Now there’s a crack in it, there’s a crack in it and it’s closed up. Is that a sign from the Lord? Is that something that has significance or is it just result of an earthquake? You judge, but I just want to bring that to your attention. It seems to me symbolic. When Jesus was crucified and when he died the curtain in the Temple was rent from top to bottom and there was a tear and it was extremely symbolic, is this symbolic? You judge."

As Pat Robertson pronouncements go, this one hardly raises an eyebrow. At least he wasn't blaming the earthquake on abortion, gay rights, or liberalism. Abortionists, gays, and liberals are not exactly running the show in Virginia politics.

On the other hand, I haven't heard what P.R. has had to say about Hurricane Irene's swath of destruction through New York and Vermont.


"I don't know how much God has to do to get the attention of the politicians. We've had an earthquake; we've had a hurricane. He said, 'Are you going to start listening to me here?'"


Her campaign later said that this comment was meant to be a joke. Many people failed to see the humor in it, including people who think that Michele Bachmann herself is a joke.

Fellow presidential candidate Ron Paul thinks that we should leave disaster relief to the Job Creators:


"[FEMA's] system of bureaucratic centralized economic planning... is a policy that is deeply flawed... I want to transition us out of this dependency... The whole idea of FEMA is a gross distortion of insurance. It's so far removed from the market and what insurance should be about... There is no magic about FEMA."


Not to be outdone, Glenn Beck observed that this year's disasters are further proof that the Lord wants us to hoard:


And what round-up of right-wing stupidity would be complete without a word from Rump Blimpaugh:


"I'll guarantee you Obama was hoping this was going to be a disaster as another excuse for his failing economy... If he's out there blaming tsunamis, if he's blaming earthquakes, and whatever natural disasters there are, this one was made to order, but it just didn't measure up."


All of which is to say that the quake and hurricane pretty much obliterated coverage of any actual LGBT news last week. (Even of Puerto Rico Senator Roberto Arango, R-NSFW, and the on-line Grindr photos of him showing off his rectal weight loss.)
Posted by Paul Berge at 12:48 PM No comments:

The East Coast has one word for those smarty-pants on the West Coast who snicker at their panic over a minor earthquake and some wind and rain:

Carmaggeddon.
Posted by Paul Berge at 4:40 PM No comments:

Email ThisBlogThis!Share to TwitterShare to FacebookShare to Pinterest
Labels: Irene

Q Toon: One of These Things Is Not Like the Other 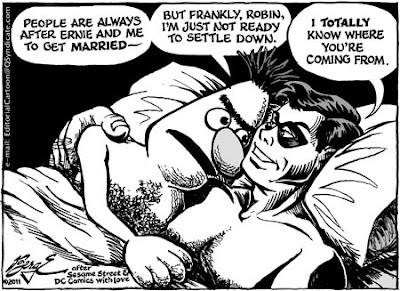 This week's cartoon is for those queer readers who believe that marriage is an outdated social construct and who get upset with other gays and lesbians who want to buy into it. Some of those latter gays suggested last week that now that New York state sanctions same-sex marriage, it was time for Sesame Street's Bert and Ernie to make honest puppets of each other. 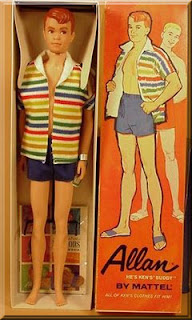 I was originally going to put Barbie's pal Ken into the cartoon -- an idea reinforced when my partner, Chris, ran across "Ken's Buddy, Allan" at a rummage sale last weekend.

Had I heard in time about Earring Magic Ken and Jewel Secrets Ken, I might have gone ahead with that plan. But it occurred to me that the folks at Mattel can be mighty protective of their trademarks, so I swapped out Ken for a fictional character who is half of a better known duo. Ken really isn't all that committed to Allan anyway, and is rarely seen with him in public any more.

And while Robin is a cartoon, not a puppet or doll, at least he lives in Gotham City, fairly near to Sesame Street -- unlike Ken, who lives way down in Malibu, I think.

So now I'm bracing for the blowback from DC Comics fans. I still remember getting an angry reaction from an "Laverne and Shirley" fan upset with a 1999 cartoon imagining that those two Milwaukeeans were still roommates nearly 40 years after the events of their TV show supposedly took place. 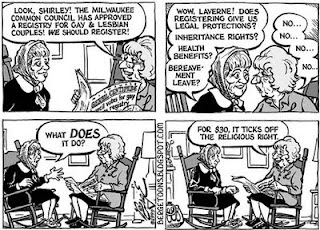 Posted by Paul Berge at 5:53 PM No comments:

This week's cartoon is brought to you by the letter M and the number 4.

In other news, Christian Century has a largely approving cover story on Dan Savage and his nationally syndicated sex advice column. The Indianapolis Colts are considering putting Brett Favre in blue and whites. And, in a story that interests nobody but Trekkies, a Cardassian got married.

Posted by Paul Berge at 8:25 AM No comments:

Another Toon: Michele Bachmann Brings It to the Party 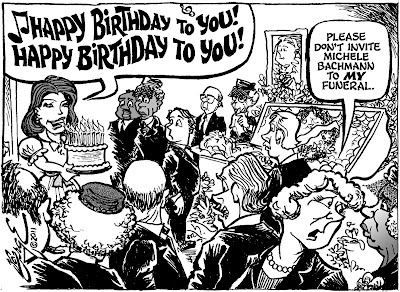 Opening a rally in Iowa on Tuesday, Michele Bachmann told the crowd, "Before we get started, let's all say 'Happy Birthday' to Elvis Presley today!"

I'm still searching for my Bachmann caricature, as you can see. Drawing her fairly small in this cartoon -- her head is a little more than an inch tall in the original drawing -- I just couldn't get those crazy eyes right.
Posted by Paul Berge at 7:15 AM No comments: 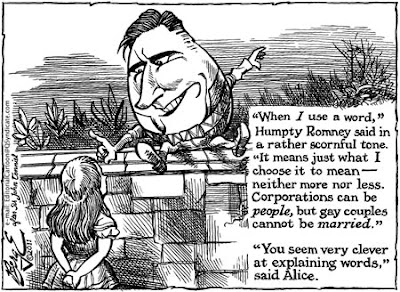 The big challenge in this cartoon was to fit Mitt Romney's long, angular face onto a round egg (and then to redraw it again a centimeter to the left, because I hadn't left enough room on the page to put in the block of text. When I had a scanner that could handle a 14" by 17" sheet of bristol board, I would have just moved the border of the cartoon a centimeter to the right, but that scanner died earlier this year and I had to replace it with one with a raised barrier and a hinge immediately against two sides of its 12" x 8" screen).

While Rick Perry's face would fit better on Humpty Dumpty's head, I kind of like the insinuation that Romney is a fragile thing heading for a fall. It's difficult to imagine today's Republican party rallying behind a former Massachusetts governor whose major achievement in office was a health care plan that served as a model for Obamacare; and who is not, by literalist fundamentalist standards, a Christian, and thus ineligible for public office as far as GOP theocrats are concerned. Their crowd was disappointed by John McCain and his lack of open religious fervor, and they're not going to lose another election cycle to someone who isn't one of their own.

Moreover, I like the name. It was a coin toss whether to call him Humpty Romney or Romney Dumpty.

For anyone who has not had the pleasure of reading Through the Looking Glass, Alice buys an egg from the White Queen (the Queen having turned into a sheep), who places the egg upright on a far counter. By the time Alice reaches it, the egg has turned into Humpty Dumpty, and the two have a conversation full of Dodgsonian wordplay.

"Of course you don't -- till I tell you. I meant 'there's a nice knock-down argument for you!'"

"When I use a word, Humpty Dumpty said in rather a scornful tone, "it means just what I choose it to mean -- neither more not less."

"The question is," said Alice, "whether you can make words mean so many different things."

"The question is," said Humpty Dumpty, "which is to be master -- that's all."

Alice was too much puzzled to say anything, so after a minute Humpty Dumpty began again. "They've a temper, some of them -- particularly verbs, they're the proudest -- adjectives you can do anything with, but not verbs -- however, I can manage the whole lot of them! Impenetrability! That's what I say!"

"Would you tell me, please," said Alice, "what that means?"

"Now you talk like a reasonable child," said Humpty Dumpty, looking very much pleased. "I meant by 'impenetrability' that we've had enough of that subject, and it would be just as well if you'd mention what you mean to do next, as I suppose you don't mean to stop here all the rest of your life."

"That's a great deal to make one word mean," Alice said in a thoughtful tone.

As I noted on Monday, Alice -- in Wonderland or Through the Looking Glass -- appears to be becoming a running theme for this election. I've already drawn the Republican field as Tweedle-dee and Tweedle-dum; and although I haven't yet set a cartoon at the Mad Hatter's Tea Party, one seems inevitable. I wouldn't be the first to do so, however.

(Nor am I positing that Dwayne Powell was the first to do so. I'm pretty sure that every liberal editorial cartoonist has produced a Mad Hatter's Tea Party cartoon since the Tea Party emerged on the scene.)
Posted by Paul Berge at 7:28 AM No comments:

This will be the second time I've gone to this particular well for a cartoon about the Republicans' 2012 presidential candidates. It may well become a running theme.
Posted by Paul Berge at 7:21 PM No comments:

While the New York Post, the conservative tabloid owned by Rupert Murdoch’s News Corporation, opposed gay marriage in an editorial and gave scant coverage to the June 24 state Senate vote that enacted that law, a second News Corporation unit in New York City is selling pricey ad space in the inaugural issue of "Wedding Pride: The Magazine for Gay and Lesbian Wedding Planning."

CNG Publications is a unit of the Community Newspaper Group, which puts out a number of local newspapers in the New York metropolitan area. CNG is owned by News Corp., which bought out previously independent papers such as the Brooklyn Paper and Times Ledger. I can see Joseph Cotten storming out of Orson Welles' office right about now.
Posted by Paul Berge at 7:40 AM No comments:

I'm back home after attending a two-day seminar in St. Paul last week.

The seminar was for one of my other jobs and focused on web site design and using social media. Apparently, one should keeps one's Facebook posts shorter than one's tweets. One should also budget one hour every day to social media tasks, although I thought people expected prompt responses to their on-line feedback, complaints and suggestions. I mean, think how frustrated the customer would become if one's office devoted only one hour per day to the phone.

None of which has any relevance to this week's Sneak Peek, but serves as a foreword to my humble apology for not having posted something in this cyberspace every day in spite of having taken my laptop along with me.
Posted by Paul Berge at 7:55 AM No comments: 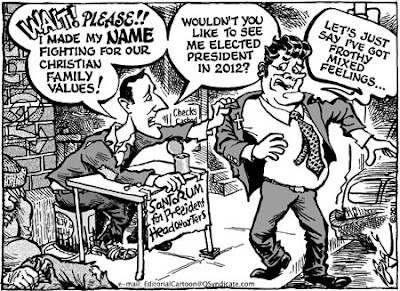 Hmmm... if you google "Frothy Mix," is the first link the official web site of Rick Santorum?

Santorum, in case you didn't know it had anything to do with a real person, is the former Senator and soon-to-be former presidential candidate from Pennsylvania, famous for equating marriage rights with man-on-dog sex.

And while you're googling, look up schadenfreude.
Posted by Paul Berge at 9:29 AM No comments: