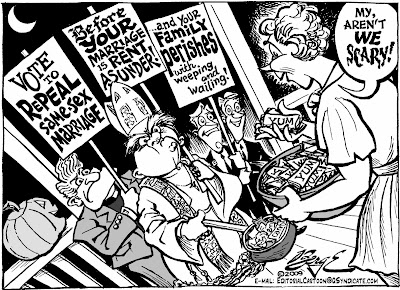 Voters in the states of Maine and Washington will go to the polls on November 3 to approve or rescind legislation passed by their representatives and signed by their governors. In Maine, the ballot question seeks to overturn marital equality; in Washington, religious conservatives want to overturn domestic partnership benefits.

I couldn't jigger this week's cartoon to account for both situations, but the magic of photoshop makes it possible to do two nearly identical cartoons without having to draw two actual cartoons.

So here's the Washington state version of the cartoon: 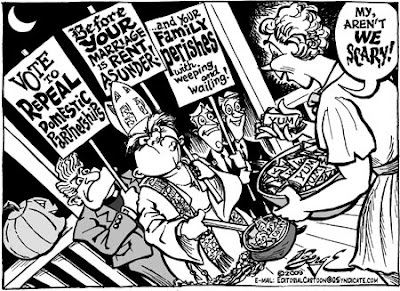 To my mind, the religious conservatives in Washington give evidence that their fight has nothing whatsoever to do with "preserving the sanctity of marriage," since same-sex couples in that state still have no right to marry. The issue for them is now, and always has been, punishing homosexuals for not being heterosexuals.
Posted by Paul Berge at 4:46 PM No comments:

I've been vacationing in Italy the past couple of weeks, but now I'm back. Here's this week's Q Syndicate cartoon: 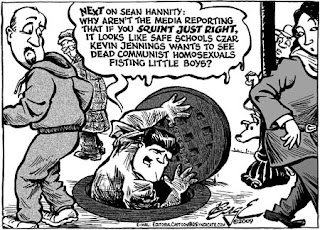 For those who don't pay attention to right-wing media: Sean Hannity, the Washington Moon Star, Rush Limbaugh, and the usual Christianist lobbies have begun a smear campaign against "Safe Schools Czar" Kevin Jennings based on his career as an activist for LGBT issues in education. In particular, they are attempting to link Jennings to pedophilia through the tenuous argument that Jennings once praised gay rights pioneer Harry Hay, and Hay once expressed some support for including NAMBLA in the gay rights struggle.

One other side note: Jennings's actual title is not "Czar" but "Assistant Deputy Secretary for the Office of Safe and Drug-Free Schools." The position was created by the No Child Left Behind Act of 2001; Jennings is the third person to hold the post, after Eric G. Andell and Deborah A. Price. He took office in July.
Posted by Paul Berge at 7:54 AM No comments: