U.S. media have been preoccupied with the very few people in this country who have had Ebola. Frightened by the prospect of Doctors Without Borders coming home to American bowling alleys, governors have hastily imposed quarantines on health care workers returning from the front lines against the disease. Faux News and fear-mongering Republicans stoke panic that somehow Mexicans will bring Ebola across the Rio Grande.

Meanwhile, across the Atlantic where Ebola really is a problem, it didn't take long for Liberian clergy to blame the disease on God's Wrath Against The Gays:


Earlier this year, the Liberian Council of Churches said in a statement that God was angry with Liberians "over corruption and immoral acts" such as homosexuality, and that Ebola was a punishment.
In May, Archbishop Lewis Zeigler of the Catholic Church of Liberia said that "one of the major transgressions against God for which He may be punishing Liberia is the act of homosexuality," local media reported.

Antigay hysteria is nothing new in Liberia. In 2012, Senator and former First Lady Jewel Howard Taylor pushed a bill increasing Liberia's penalty for homosexual acts from the current one to three years in prison to her proposed death sentence. A similar bill was proposed in the Liberian House by Clarence K. Massaquoi, but President Ellen Johnson Sirleaf stated she would not sign any such bill. Still, decriminalization of homosexuality is nowhere on Liberia's horizon.

An Economist cover story earlier this month on the widening split in attitudes toward homosexuality in the West and the rest of the world includes a map of countries where homosexual acts were either criminalized or decriminalized since 1966. I should note that one of the Ebola-stricken countries, Côte d'Ivoire, is included among the countries in which homosexual acts per se are not against the law.

Posted by Paul Berge at 9:56 AM No comments:

Lord, grant me the grace to accept with serenity
the things that cannot be changed,
Courage to change the things
which should be changed,
and the wisdom to know the difference.
Or else!
Posted by Paul Berge at 8:37 AM No comments:


Last week, I drew a deliberately detail-free cartoon: a rainbow, a Lady Justice, and some calligraphy. Anything further would have distracted from the point of the cartoon. As a result, it didn't take a particularly long time to draw once I started inking it.

This week's cartoon is another story altogether, and at one point I emerged from my basement lair in order to let ink dry before going back and adding background details. Chris asked me if I were finished drawing yet. "No," I told him. "I'm drawing the Sistine Chapel."

"Are you going to finish in time to go on vacation this year?"
Posted by Paul Berge at 6:56 AM No comments:

Eight o'clock and all is ruff!
Posted by Paul Berge at 7:30 AM No comments:

Q Toon: The Arc of the Moral Universe


Well over a week after the fact, here's my response to the Supreme Court's decision not to overturn lower court rulings finding marriage discrimination unconstitutional.

It's not often that I put out something with no attempt and humor, irony, or at least sarcasm, but I decided that was the way to go this time. Nick Anderson's cartoon the morning after the decision portrayed the judicial situation better than most, although I thought it would be funnier to show Justice Roberts -- or perhaps several justices -- slapping a hand over an apoplectic Justice Scalia's mouth. But then Mike Keefe drew this one, so that idea was out.

And the judgments keep rolling in -- Idaho, Alaska, Nevada, North Carolina -- and suddenly one wonders which state will be the last to withstand the tide. Alabama?
Posted by Paul Berge at 7:53 AM No comments:

It's time for installment #3 in my series of Wisconsin candidates for office in 2014: 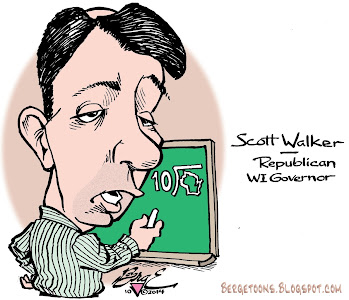 Here the incumbent governor, Republican Darth Snotwalker, takes to the classroom to teach the state a little lesson in division.
Posted by Paul Berge at 7:52 AM No comments:

This week, a little something for all you bondage fetishists out there.

And toga partiers.
Posted by Paul Berge at 8:29 AM No comments:

Oh, I Believe in Yesterday

I had wanted to post this front page on September 13, the 40th anniversary of the demise of Chicago Today, but I couldn't remember where I had stored my copy. 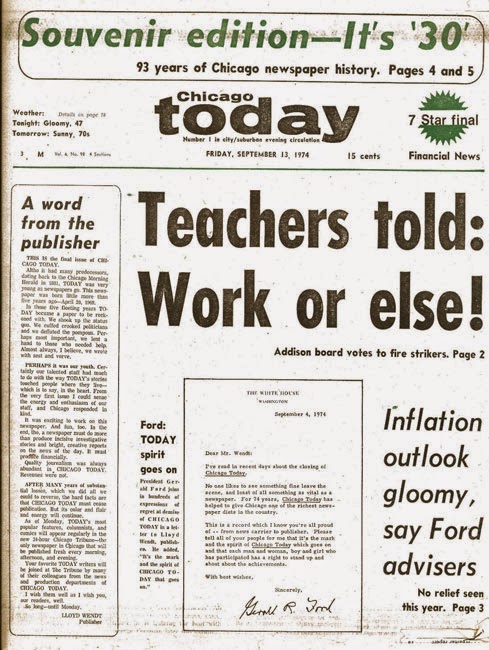 So, here, on the 40 Year And One Month anniversary is the front page of the final, "souvenir" edition of the 7-star edition of Chicago Today. The tabloid Chicago Today was created in 1969 as the successor to the Hearst-founded broadsheet Chicago Herald American. At its demise, it was one of two afternoon papers in Chicago -- still boasting that it had the higher circulation of the two -- and was folded into its owner, the Chicago Tribune, bringing all the cartoons, columnists, and other features with it.

You can read a more complete history of the Chicago American and Chicago Today at the Chicagology site here.
Posted by Paul Berge at 8:05 AM No comments:

Continuing a series of caricatures of characters running for office in Wisconsin this year, here's Democratic gubernatorial candidate Mary Burke.

I drew her squinting because one of her first TV ads had her squinting into the sun as she spoke to the camera, and that was the first impression she left on voters. 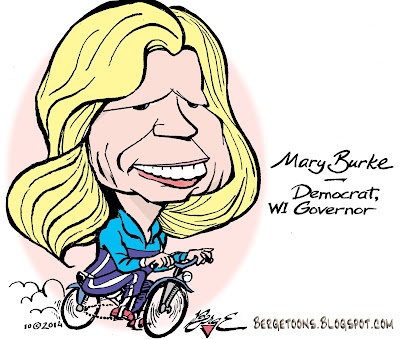 Posted by Paul Berge at 7:28 AM No comments:

Between now and the November election, I'm posting a few caricatures of mostly Wisconsin candidates for office. 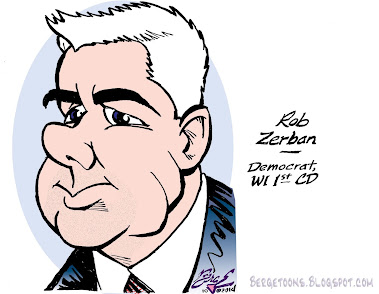 I'm starting today with Rob Zerban, a Democrat from Kenosha making his second run for the First District congressional seat held since 1999 by Republican Paul Ryan. In 2012, he received 43% of the vote against Ryan's 55% in spite of the Romney-Ryan ticket at the top of the ballot losing the district to Obama-Biden.

Ryan did not debate Zerban during the 2012 campaign, but will meet him at Carthage College on October 13 and at UW-Rock County on October 20. Both debates are at 6:30 p.m., require advance tickets to attend in person, and should be over before Monday Night Football's kick-offs.

Zerban faces an uphill struggle against Ryan, a prominent leader of the Republican establishment, in a district that was redistricted to be safe for Republicans in 2001 and safer still in 2011.
Posted by Paul Berge at 8:03 AM No comments:

So I'm spending the entire weekend stewing over what to draw for the LGBT press and finding nothing inspiring in the news until I come across a little item about South Carolina Senator Lindsey Graham floating the idea that he might consider thinking about mulling the possibility of running for president in 2016. And I scour the internet trying to find a photo of Senator Graham taken from his right and spend a couple of hours sketching and erasing and resketching and re-erasing and getting thoroughly annoyed with the utter failure of his face to translate onto the page until I decide, Oh, screw it, I'm inking what I've got because it's getting late on a Sunday night and it's been a long enough day already. And I wake up in the morning to scan and colorize the cartoon, and I send the finished product off to the syndicate and post a Sneak Peek on this here website, and I get into the car and drive to work on the first Monday in October.

And as I'm getting out of the car, I hear the report that the Supreme Court has decided to let a bunch of lower court rulings in favor of marriage equality stand.
Posted by Paul Berge at 8:13 AM No comments:

Why, it's the first presidential campaign cartoon of the 2016 season, right on schedule.
Posted by Paul Berge at 7:35 AM No comments:

Email ThisBlogThis!Share to TwitterShare to FacebookShare to Pinterest
Labels: 2016

I thought I wouldn't be drawing any more cartoons about Minnesota Republican Michele Bachmann now that she's retiring from Congress, but I guess I was wrong. 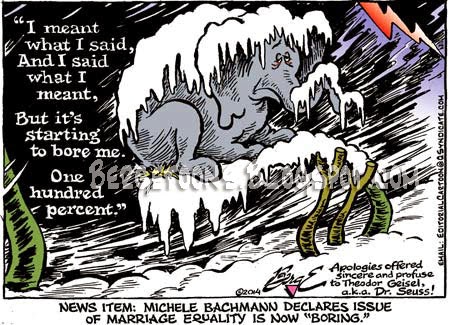 ✒
Gay blogger/Sirius dude Mike Signorile tried to engage Bachmann on the topic of marriage equality at the Value Voters Summit, but she would have none of it. According to Signorile's tweet, she walked away sniffing that gay marriage is "not an issue... in fact, it's boring."

Bachmann later qualified the remark to the right-wing World Net Daily, saying, "What I said is that this won’t be the issue that drives the 2014 election. I told the reporter it’s getting boring having them only press this issue with Republicans while ignoring Democrats."

Bachmann has a history of running away from non-sycophantic reporters, so it's entirely believable that she is still very interested in discriminating against same-sex couples. The Republican party in general, however, has suddenly taken a vow of silence on the issue now that it appears opposition to marriage equality turns off moderate and independent voters.

Not that they're getting off that nest any time soon.

✒
(Something appears to have gone wrong with the AAEC site today. My apologies for the watermarked version of this week's cartoon, but I have to protect my editors' interests.)
Posted by Paul Berge at 8:26 AM No comments:

By Their Fruit Shall Ye Know Them

I first saw Jerry Holbert's Boston Herald cartoon about intruders in the White House on the gocomics.com site, so I didn't see anything wrong with it. The cartoon shows President Obama brushing his teeth in the White House living quarters bathroom, surprised by a stranger bathing in the tub behind him who says, "Have you tried the new raspberry flavored toothpaste?" 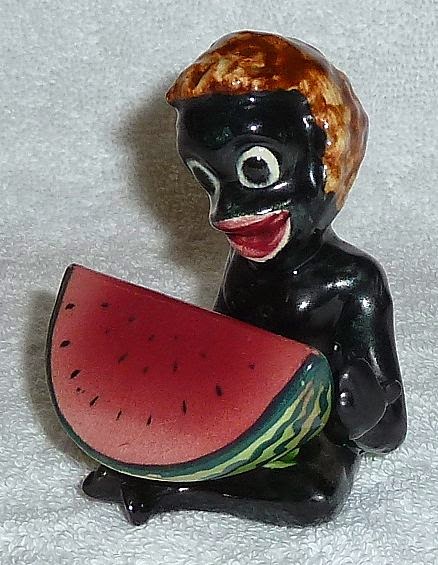 Only that's not how it appeared in the Boston Herald. In their original version, the toothpaste flavor was watermelon, which a lot of people thought echoed the racist image of Little Black Sambos grinning from ear to ear enjoyin' demsefs a big ol' watermelon.


“I feel awful about the perception that it was racist, but it was nothing of the sort,” Holbert tells The Washington Post’s Comic Riffs. “I wanted another flavor of toothpaste for the cartoon, and we had a bottle of Colgate kids’ toothpaste that was watermelon-flavored … watermelon seems to be a big flavor these days, so…I went with it.”

There has been a lot of things of the sort going on lately. Some feminists were upset by a Jeopardy category this week called "What Women Want" (for example, "Some help around the house; would it kill you to get out the Bissell bagless canister one of these every once in a while?" "What is a vacuum cleaner?") Christianists have complained about people mocking Tim Tebow's praying on the football field, but no team he played on was ever penalized 15 yards for it as the Kansas City Chiefs' Husain Abdullah was Monday night.

Do racism, sexism, or religious bigotry have to be intentional? In effect, no. The name of the Washington Redskins and the tomahawk chop of the Atlanta Braves (and surely of the Chiefs) offend Native Americans whether or not someone sat down and decided, "You know what? I think we should all get together and offend some Indians."

It isn't Political Correctness to try to avoid giving offense to people, intentionally or unintentionally. Yes, there may be some hypersensitive people out there, and I myself certainly can't promise that I'll never offend some group of people. Heck, I'd say that I offend people for a living except that I don't quite make a living from it.

But we take this episode as another warning to be mindful of stereotypes and cultural insensitivity. I'm not sure how anybody could fail to catch the racist association there is between African-Americans and watermelons. Image-googling "Obama watermelon" will show you that there are plenty of racist assholes out there who know it very well.

Posted by Paul Berge at 9:32 PM No comments: