This Sneak Peek Must Suffice

I'll be afk later this week, so to see the full cartoon, find me at
The Association of American Editorial Cartoonists, Between the Lines, or The Bay Area Reporter.
Posted by Paul Berge at 8:17 AM No comments: 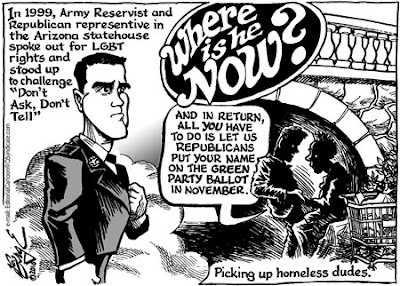 Since I drew this cartoon, Steve May has been forced to withdraw from a race for the Arizona statehouse not because of his cynical recruitment of homeless people to put on the Green Party ballot, but because of a drunk driving arrest.

But the true outrage is the chicanery of May -- and apparently others in the Arizona Republican party, according to this withering Arizona Republic editorial -- who stoop to dirty tricks to win elections. I strongly suspect that Al Greene in South Carolina is another case in point.

I'm old enough to remember back in 1986 when Illinois Democrats were stunned by the victory in primary elections of Lyndon LaRouche lunatics, including for the post of lieutenant governor. The debacle doomed the gubernatorial campaign of Adlai Stevenson III (whose grandfather has been featured in some of the R.C. Bowman cartoons elsewhere on my blog). In that case, the LaRouchies got on the primary ballot themselves, however, and were not put there by Republican operatives.
Posted by Paul Berge at 5:12 PM No comments:

Before the passage of the 17th Amendment to the U.S. Constitution, Senators represented -- and were elected by -- not the people of their state, but their state legislatures. Not surprisingly, there arose such cases as that of Senator William A. Clark of Montana, who bribed state legislators to elect him in 1898.

Out there in Montana.
(The musical staff quotes "get your money's worth" from what I assume was a popular song.)

Clark came to Montana in the gold rush of the 1860s, eventually establishing himself as a banker and in turn, a mine owner by virtue of foreclosing on mining properties. He also owned a newspaper, the Butte Miner, which he used to advance his political ambitions. He presided over Montana's 1884 and 1889 constitutional conventions, and advocated Helena for the state's capital over its rival, Anaconda. (He was one of the two richest Americans when he died in 1925; Clark County, Nevada, home of Las Vegas, is named for him.)


"He is as rotten a human being as can be found anywhere under the flag; he is a shame to the American nation, and no one has helped to send him to the Senate who did not know that his proper place was the penitentiary, with a ball and chain on his legs. To my mind he is the most disgusting creature that the republic has produced since Tweed's time."


To bring this story into the present day, 104-year-old Huguette Clark is his daughter. You may have heard of the legal dispute over the financial affairs of the reclusive Miss Clark, who has not been photographed since the 1930's. Her palacial estate near Santa Barbara, California, has sat empty since 1963, and her properties in Connecticut and New York City are likewise unoccupied. The fact that nobody seems to have seen her except her accountant and her attorney in decades is a major point in the legal tangle.
Posted by Paul Berge at 7:51 PM No comments: It looks like this is a cartoon about Arizona politics that has nothing to do with the Headless Governor, Jan Brewer.
Posted by Paul Berge at 8:34 AM No comments:

Email ThisBlogThis!Share to TwitterShare to FacebookShare to Pinterest
Labels: Arizona 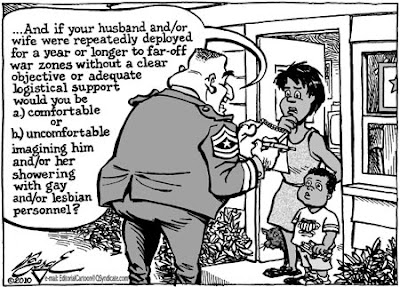 This week's cartoon concerns a Pentagon survey of military spouses of their attitudes about the possible end of "Don't Ask, Don't Tell." The 44-question poll includes such questions as “Assume Don’t Ask, Don’t Tell is repealed. Would repeal affect your family readiness?” and “Assume Don’t Ask, Don’t Tell is repealed and you live in on-base housing. If a gay or lesbian Service member lived in your neighborhood with their partner, would you stay on-base or would you try to move out?"

Servicemembers United claims that the survey poses questions that assume that lesbians and gays are scary people, and supposes that repeal of DADT would be difficult for military families to handle.


Just as the assumption that the repeal of “Don’t Ask, Don’t Tell” would be problematic for straight troops is an insult to the professionalism of straight troops, so to is the assumption that the law’s repeal would be problematic for families an insult to military families and military spouses. The assumption that spouses and families might be ill-prepared to handle such a simple and long-overdue policy change insults their own professionalism, their generation’s non-discriminatory values, their unique ability to handle diversity, and their battle-hardened ability to handle any changes that the military throws their way.

This week, I have a little fun with the military, and with polling. And while this particular survey was sent by e-mail, it's more fun to draw people interacting each other in the real world than over their computer, so I drew this rather old-fashioned door-to-door approach.
Posted by Paul Berge at 6:55 PM No comments:

This guy does not have the rank insignia that I wanted him to have -- in fact, his shoulders probably don't match his lapels. I had in mind that he should be some mid-level Pentagon guy, but I think I've ended up with Corporal Major First Class Larry Ensign.
Posted by Paul Berge at 7:26 AM No comments:

Email ThisBlogThis!Share to TwitterShare to FacebookShare to Pinterest
Labels: Military

Here are some cartoons on a variety of world issues by R.C. Bowman, cartoonist for the Minneapolis Tribune in 1900.

Uncle Sam to the Senator: "Ho there! Take that bill in hand, will you? That other fellow seems to be too reckless."
There were two competing ideas on where to build a canal through Central America at this point in history. A rival to the Panama Canal route would have gone through Nicaragua from Bahia de Punta Gorda in the east, to Lake Nicaragua and out to the Pacific.

John Bull: "Heavy? Of course it's heavy. But think of the glory."
Great Britain was in the middle of the Boer War in South Africa at this time.

Looking for his Thanksgiving dinner."
The United States sent warships to occupy Izmir (Smyrna) in order to collect indemnities against Turkey (the Ottoman Empire) for "outrages committed against missionaries." Here's a New York Times article. Keep in mind, this turkey pun was a bit younger back then.

The World: "You know, uncle, it's getting so I do almost all my trading here, now!"
Uncle Sam: "I'm glad to hear it; and to be candid, I'd sooner have your trade than that of any other planet I know of."
Posted by Paul Berge at 8:16 PM No comments: 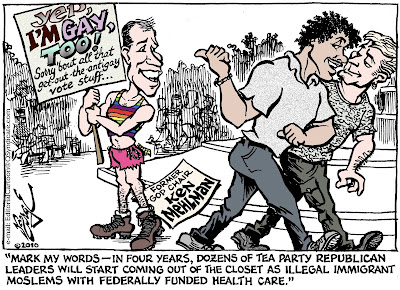 "The reality is, it’s taken me 43 years to come to terms with this part of my life. The process has been something that has made me a happier and a better person. It’s something I wish I had done years ago."

Part of the fun of drawing this particular cartoon was the opportunity to poke some light-hearted fun at the phenomenon of The New Guy.

We've all been there, and we've all seen it. When a person comes out as gay or lesbian, whether in high school or middle age, he/she goes all out. Suddenly, everything is rainbows, bright colors, leather, body piercings, mullets, the shaved head, late nights at the disco, or what-have-you, depending on the person's particular proclivities. The phenomenon also includes Devotion To The Cause:

Indeed, Mehlman’s first act as an out gay man will be hosting a fund-raiser of the foundation next month to help support the case [against the anti-equality marriage amendment to California's constitution], which likely carries a price tag in the millions of dollars (the group has declined to disclose exactly how much). Although the invitations have yet to be mailed, Mehlman told The Advocate Wednesday evening that just through pre-selling the event, organizers had already helped to raise about $750,000.


Well, welcome to The Cause, Kenny. You may have been the Roy Cohn of the '00's, but if you Republicans can welcome all those Dixiecrats into your party, the energy of The New Guy entitles you to our grudging acceptance. As long as it lasts.
Posted by Paul Berge at 11:07 AM No comments: