Q Toon: Putting On The Fritts 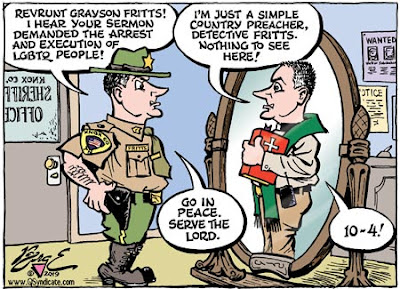 On Sunday June 2, Grayson Fritts, founding pastor of All Scripture Baptist Church in Knoxville, Tennessee, celebrated LGBTQ Pride Month with a sermon calling upon police to enforce biblical law that "If a man also lie with mankind, as he lieth with a woman, both of them have committed an abomination: they shall surely be put to death; their blood shall be upon them" (Leviticus 20:13, KJV).


Fritts made several violent statements in his sermon, calling non-straight people "freaks, animals" and other names. He expressed the belief that it is the duty of police and the government to enforce anti-LGBTQ+ laws that are outlined in the Bible.
"Here's how it should work, it shouldn't work when we go out and we enforce the laws, because the Bible says the powers that be are ordained of God and God has instilled the power of civil government to send the police in 2019 out to these LGBT FREAKS and arrest them," he ranted. "Have a trial for them, and if they are convicted then they are to be put to death...do you understand that? it's a capital crime to be carried out by our government."
Fritts went on to say, "All the pride parades, man, hey call the riot teams, we got a bunch of 'em, get the paddy wagon out here, we got a bunch of 'em going to jail, we got a bunch of them we're gonna get convicted because they've got their pride junk on and they're professing what they are, they're a filthy animal."

One might dismiss this as the fulminations of one more Fred Phelps wannabe, but as it happens, Revrunt Fritts is also Deputy Fritts of the Knox County Sheriffs Department. Or, well, he was until video of his sermon got out.

Even as Knoxville Mayor Madeline Rogero and Sheriff Tom Spangler denounced Fritts's sermon and the District Attorney began a review of every investigation in which the former Deputy of the Month had been involved, Fritts doubled down in a follow-up sermon, telling his flock, "Just as God loves, God hates. ... Put homos to death!"

Shortly before that follow-up sermon, someone left an rainbow flag attached to a note outside the storefront church. The message read, "Dear Pastor Fritts, I don't know what happened to you, but I am so sorry. Love, Thy Neighbor." 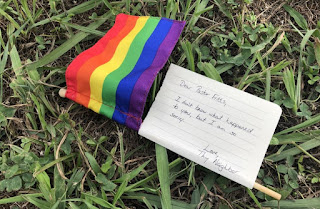