Q Toon: AIDS at 30-Something


My apologies for spoiling somebody's Thanksgiving appetite, but I decided to draw a cartoon for World AIDS Day (December 1) this week.

Which presented the challenge of How To Draw AIDS. For a cartoon marking the supposed 20th anniversary of the disease (or more precisely, of its diagnosis in the U.S.), I had drawn it as a skeleton; but that was a particularly unsatisfying personification. Any  deadly disease -- or terrorism, or freeway accidents or the Republican alternative to Obamacare -- can be depicted as a skeleton.

Instead, I decided to draw whatever the virus is actually supposed to look like, which is, apparently, a bucky-ball with polyps. And, I arbitrarily decided the other virus would be the poliovirus, at the risk of alarming someone out there who knows that I got their relative sizes wrong or whatever.
Posted by Paul Berge at 10:55 AM No comments:

Pelican Publishing has informed us editorial cartoonists that there will be no more editions of Best Editorial Cartoons of the Year.

The move is not particularly surprising. The series's longtime editor, Charles Brooks, passed away a couple of years ago. The last two editions have been edited by Steve Kelley, who produced a well-balanced book, and Dean Turnbloom, who didn't. Yet even before that, a significant number of the very best practitioners of our dwindling profession declined to submit their work for consideration; if not for the award-winning cartoons printed on the first several pages, the book's title was often rather dubious.

As for this week's cartoon: I had hoped to be able to include a street sign for Huguenot Walloon Drive in the cartoon as a tribute to the late Mike Nichols; that was the name of the street Nichols and Elaine May would use when they needed to include a street address in their skits. Unfortunately, there was no place for a street sign anywhere in the cartoon.
Posted by Paul Berge at 6:40 PM No comments:


Just before I left for vacation, the Sixth U.S. Circuit Court of Appeals went against a wave of appellate court rulings by deciding that it is constitutional for Michigan, Ohio, Kentucky, and Tennessee to deny marriage rights to same-sex couples. The two Republican appointees found in DeBoer v. Snyder that

This, after earlier noting that in the case of the Michigan couple named as plaintiffs, April DeBoer and Jayne Rowse,


Marriage was not their first objective. DeBoer and Rowse each had adopted children as single parents, and both wanted to serve as adoptive parents for the other partner’s children. Their initial complaint alleged that Michigan’s adoption laws violated
the Equal Protection Clause of the Fourteenth Amendment. The State moved to dismiss the lawsuit for lack of standing, and the district court tentatively agreed. Rather than dismissing the action, the court “invit[ed the] plaintiffs to seek leave to amend their complaint to . . . challenge” Michigan’s laws denying them a marriage license.

So I guess marriage discrimination is intended to promote tax breaks for opposite-sex couples having "unintended offspring." Which puts Republican opposition to "Planned Parenthood" in a whole new light.
Posted by Paul Berge at 8:02 AM No comments:

I'm back from The Big Easy and drawing more-or-less current events again this week.

If you're carousing in the Crescent City any time soon, be sure not to limit yourself to Bourbon Street. We caught a couple really good, young jazz bands performing at bars on Frenchmen Street (which, admittedly, is only spitting distance from the French Quarter anyway).
Posted by Paul Berge at 9:30 PM No comments:

I have no firm opinions on the Nature vs. Nurture debate -- that is, are gays born this way, or is it how we were raised? -- but the subject in this week's cartoon has a few ideas of his own.
Posted by Paul Berge at 8:30 AM No comments:

Email ThisBlogThis!Share to TwitterShare to FacebookShare to Pinterest
Labels: LGBT

Meanwhile, in a leather recliner far away, mild-mannered New Yorker reader Werner Klapsdoktor spotted an amusing cartoon about dogs enjoying a costume party in the Hamptons.
Posted by Paul Berge at 6:37 AM No comments:

If I Seem Distracted

If I've seemed distracted lately, and if next week's cartoon seems curiously disconnected from current events, please accept my apologies. Chris and I were married yesterday evening. 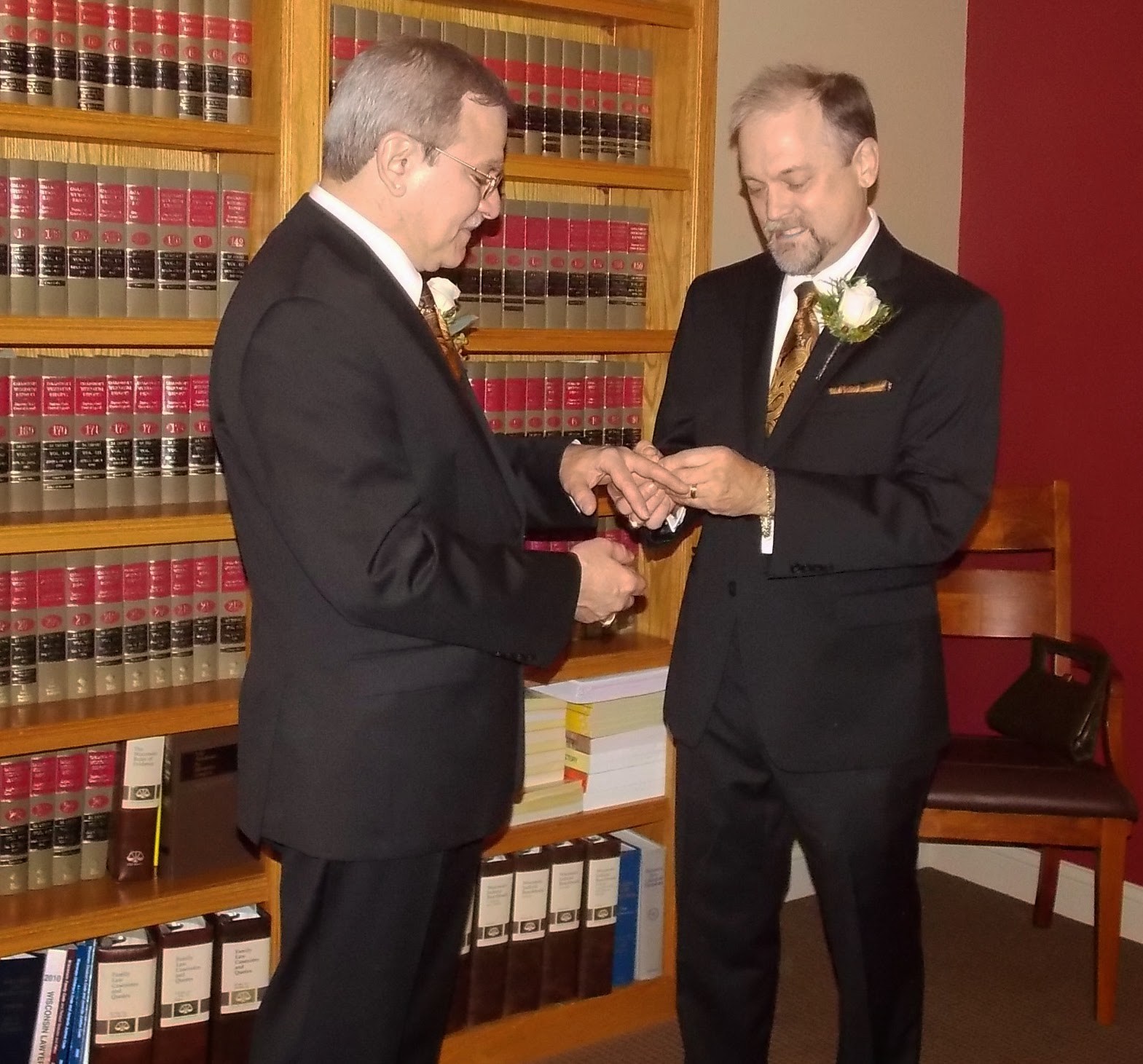 Posted by Paul Berge at 3:25 PM No comments:

Since I had to send this week's cartoon to the syndicate Monday morning, it is not about the results of Tuesday's elections.
At this point, you may be anxious to discuss something else, anyway.

You may recall that, back in June, CNBC squawking head Simon Hobbs had an awkward moment on his TV show when he mistakenly assumed the fact that Apple CEO Tim Cook is gay was common knowledge. (My blog entry on that is here.) Mr. Cook has decided to let Mr. Hobbs off the hook, whereupon Mr. Hobbs has probably added his outing of Mr. Cook to his list of successful market forecasts.

Meanwhile, this leaves the ladies from my Million Moms cartoons puzzling whether to okay the latest iTunes update.
Posted by Paul Berge at 7:48 AM No comments:

Now that another election is over and you find that you miss all those obnoxious, mendacious, cynical, vicious, snide, sleazy campaign commercials, take heart. There is still AM radio. 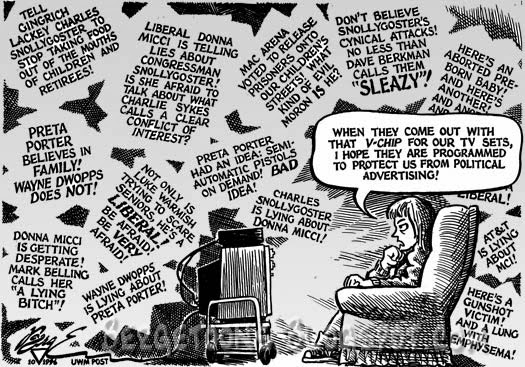 And if your inbox seems empty without those 40-50 daily emails from politicians and their staffers begging you for money, there are always Nigerian princes happy to fill the void.
Posted by Paul Berge at 7:26 AM No comments:

Email ThisBlogThis!Share to TwitterShare to FacebookShare to Pinterest
Labels: advertising, AM Radio

Come back later this week for the return of Stockard Character, the Mom who's One in a Million.
Posted by Paul Berge at 5:02 PM No comments: