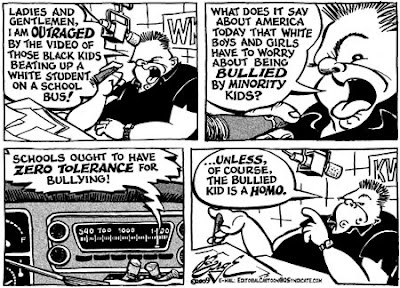 The school bus video behind this cartoon is one of those flash-in-the-pan stories, so the cartoon might be a little tardy. Rush Limbaugh, for one, seized on the incident to make some bizarre argument about how liberals or President Obama or Van Jones or ACORN or whatever have made it okay for black kids to beat up white kids on the way to school. (A detail that I saw only on CBS's Early Show was that it was a black student who broke up the fight.)

It's good to see that right wingers have finally come around on the topic of bullying. When gay or gay-perceived students and their parents have called for anything to be done, right wingers have sided with the bullies.
Posted by Paul Berge at 11:30 AM No comments:

Jeffrey Thomas passed away on September 16 in Footville, Wisconsin at age 69. The retired orthopedist ran for Congress seven times in Wisconsin's first congressional district, winning the Democratic primaries in 2000, 2002, 2004, 2006 and 2008. He never got more than 37% of the vote in the general election.

To be fair, he never got any support from the Democratic party, either. I'm not privy whether it was because the party never thought he had a chance of winning, or whether it was a question of his stands on any issue; I understood him to be against abortion rights, and he didn't come from a union background. But it's hard to ignore the fact that the legislature carved a solidly Republican district out of our formerly swing district in 2002 as part of a bipartisan agreement to protect all of Wisconsin's incumbent congressional representatives.

At any rate, I've been to some Racine Democratic Party events in election years and there was never the slightest evidence that there was any congressional race on the ballot at all. Not one yard sign. Not one bumper sticker. Not one sign-up sheet. The Democrats have usually rented office space downtown. Jeff Thomas's campaign office (the year that I found it) was in a corner grocery store in a rundown neighborhood a mile away.

Somehow, for some reason, Dr. Thomas never gave up. There were five candidates on the ballot for the Democratic nomination in 2008, a couple of whom attracted brief attention by MoveOn.org and the Daily Kos. But Thomas won the nomination again. A few hand-painted yard signs were the only indication thereafter that he was still in the running. Republican incumbent Paul Ryan, with no shortage whatsoever of campaign funds and no competition in advertising or media attention, won the November election without breaking a sweat.

Rest In Peace, Jeffrey Thomas.
Posted by Paul Berge at 5:27 PM No comments:

Or, How To Speak Southern? 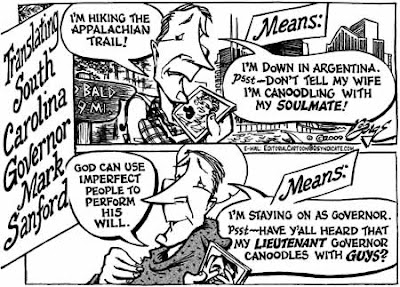 Outing blogger Mike Rogers has reported allegations that South Carolina's Lieutenant Governor Andre Bauer is a closeted gay man. The rumors could doom the career of the 40-year-old bachelor, but may be just the thing to save Governor Mark Sanford from impeachment.

On the other hand, South Carolina legislators may prefer that Sanford be succeeded by someone they can imagine themselves trouncing in the next election.
Posted by Paul Berge at 7:06 AM No comments: 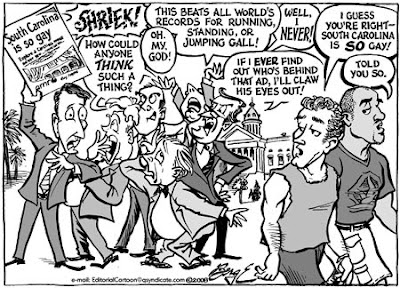 ... most of the country had never heard of him.
Posted by Paul Berge at 7:31 PM No comments:

Old link I just stumbled upon

I had no idea at the time, but a 2008 cartoon of mine caught the attention of Dan Froomkin, late of the Washington Post, at the very end of this article. As I recall, I was not the only person to make the semantic observation about "timetables" vs. "time horizons" for troop withdrawals from Iraq.

This is the cartoon:

Posted by Paul Berge at 2:27 PM No comments:

The private security firm contracted to provide security guards to the American Embassy in Afghanistan has been replaced after allegations surfaced of wild parties and sexual harassment supported by photos of alcohol-fueled clothing-optional antics on the embassy compound. This week's cartoon offers them one last chance to make lemonade from their lemonhead employees. 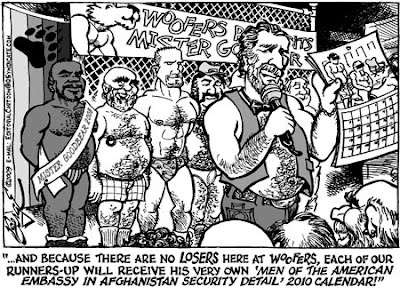 I'm no prude, and I certainly appreciate that trying to maintain the security of an American outpost in a war zone is pretty stressful, but they really need to require embassy personnel at all levels to read The Ugly American before they arrive overseas to represent our country. Everyday Americans do not look kindly on behavior by foreign nationals at embassies on our soil that mocks American laws, norms and parking regulations. Al Qaeda's entire raison d'être springs from Americans merely setting foot on Saudi Arabian sand; the bacchanalia of these guards can only confirm Muslims' most hostile prejudices against Americans.

Come on, guys. Keep this kind of stuff at home where it belongs.
Posted by Paul Berge at 12:22 PM No comments:

Pen and ink cartooning is a dying art -- and for proof of that, all you need to do is to try to buy supplies.

I used to be able to go into a number of artist supply stores in my little town where I could buy india ink and pen nibs. The nibs would be loose in little bins, usually near the checkout counter. I could select exactly the kind of nib I wanted and buy as many as I wanted for 35 cents apiece. The nib I use most is the 107 hawk quill (pictured), which gives me a reasonably steady line. I'll occasionally use other nibs for extra fine lines or extra heavy lines; but for faces, hands and lettering, I want something that isn't going to flare out unexpectedly.

We're down to two "crafters'" stores in town now, and the only way to buy nibs is in packages. For $9.99, I can buy a 107 hawk quill nib, along with a 102 crow quill nib and two plastic nib holders. Nibs wear down as a matter of course, but I don't have to replace my nib holders anywhere near as often. I'm also amassing a sizeable collection of unused crow quill nibs. There are similarly priced variety packages of six nibs and a single holder, but nowhere can I buy just the nibs -- let alone just the nibs I want.

I started out using Higgins india ink, but they must have changed their formula over the years. At first, their black ink was just fine for my purpose, but I had to switch to their "Black Magic" ink so that unerased vestiges of the pencilling on my cartoons wouldn't show. Eventually, I found that the "Black Magic" was turning gray as it dried -- as if the black tint was actually soaking into the interior of my bristol board somehow, rather than remaining on the surface. I tried several other disappointing brands for a while before finding Winsor & Newton's excellent product.

I suppose I'll have to start ordering supplies on the internet. I just wanted to put this out there on the internether for the benefit of anyone else trying to decide what kind of india ink to buy when their favorite brand isn't available.
Posted by Paul Berge at 10:30 AM No comments:

When Mercury Marine told its union employees at its Fond du Lac, Wisconsin plant, that it would move their jobs to a non-union factory in Stillwater, Oklahoma, unless the union voted to allow M.M. to break the current contract, the union voted against the proposed pay freeze and benefit cuts. They must have thought that there was still room for negotiation, but M.M. management decidedly said NO.

The union scrambled to hold another vote on Merc's unchanged demands, but Merc announced they would refuse to recognize the vote. Meanwhile, Fond du Lac city leaders scrambled to offer Mercury Marine tax breaks and their firstborn sons to remain in town.

Mercury has deigned to allow a third vote, taking place today -- so now, of course, the Stillwater Chamber of Commerce is upset that Mercury Marine is breaking their promises to the good people of Stillwater. Mercury Marine breaking promises! Imagine that.

But Stillwater civic leaders know how this game is played. They are prepared to offer Mercury Marine a permanent tax holiday, plus conjugal rights to citizens' wives and daughters.
Posted by Paul Berge at 6:57 AM No comments:

Just because you have a right to do something doesn't make it a good idea to go ahead and do it... 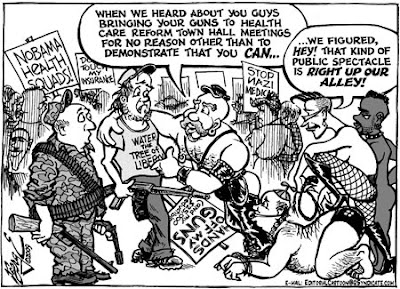 Posted by Paul Berge at 7:52 AM No comments: