Q Toon: The Eve of Distraction 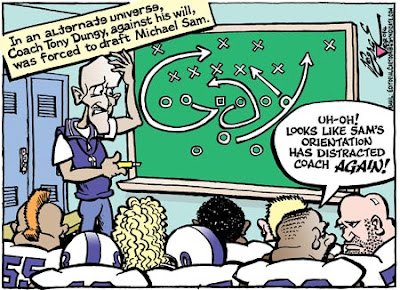 The Tampa Tribune recently quoted former NFL coach Tony Dungy as saying that he would not have drafted openly gay defensive lineman Michael Sam. "I wouldn't have taken him. Not because I don't believe Michael Sam should have a chance to play, but I wouldn’t want to deal with all of it. It’s not going to be totally smooth … things will happen."

Dungy had been less concerned about dealing with less than totally smooth things happening with Michael Vick's return to the NFL after he had served his sentence on dog fighting charges; ESPN describes Dungy as a "mentor" to the rehabilitated quarterback.

After facing some criticism for apparently worrying more about having a gay player on his hypothetical football team than a convicted felon (see Drew Litton's cartoon here), Dungy issued an apology, stating that he has always believed that Michael Sam deserves the same chance to play in the NFL as any straight dude.


"What I was asked about was my philosophy of drafting, a philosophy that was developed over the years, which was to minimize distractions for my teams.
"I do not believe Michael's sexual orientation will be a distraction to his teammates or his organization. I do, however, believe that the media attention that comes with it will be a distraction. Unfortunately we are all seeing this play out now, and I feel badly that my remarks played a role in the distraction."

Later, Dungy appeared on the Dan Patrick Show, where he eventually said, "I would want to wish [Sam] the best and let him know I have no bitterness or animosity to him, even though I don't agree with his lifestyle. I love him and I wish him the best and I'd love to say that to him."

For his part, Michael Sam has taken the high road, telling ESPN that he respects Dungy, and thinks Dungy is entitled to his opinion, but "Thank God he wasn't the St. Louis Rams coach."
Posted by Paul Berge at 7:57 AM No comments:

Fair warning: we're in for a dose of locker room humor this week.

Plan your browsing accordingly.
Posted by Paul Berge at 7:54 AM No comments:

To give you a sense of the pace of things as the world stumbled resolutely into World War I, you may recall that June 28 was the 100th anniversary of the assassination of Archduke Franz Ferdinand of Austria-Hungary. Here's the front page of the Chicago Tribune on Monday, July 27, 1914. (Click image to reembiggenificate.) 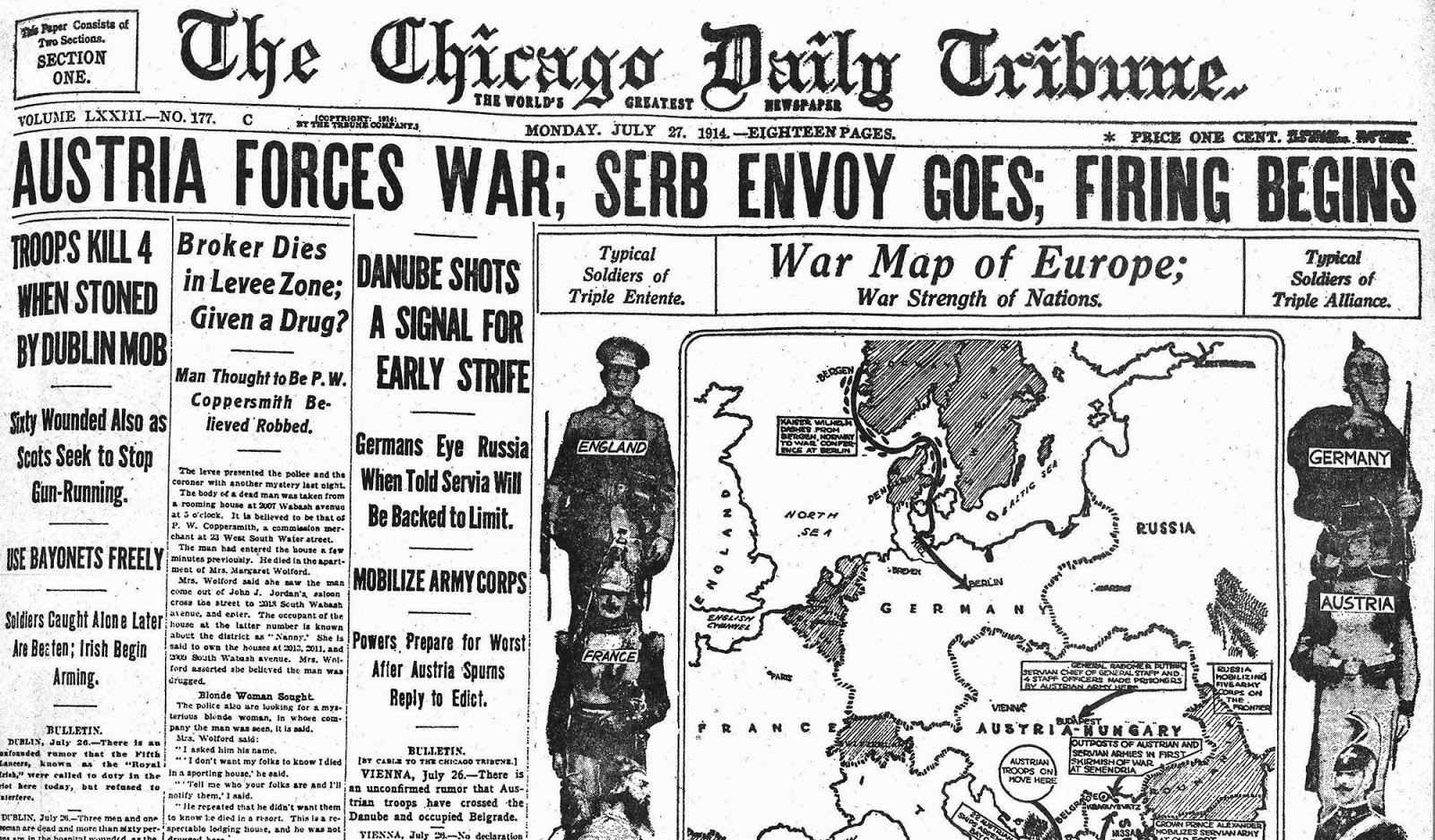 Posted by Paul Berge at 6:40 AM No comments:

Q Toon: The Plane in Ukraine 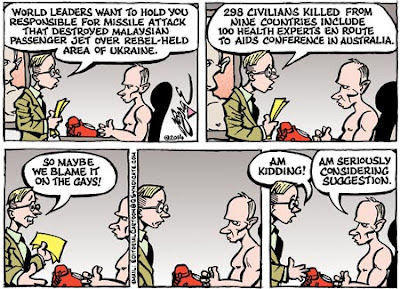 Since the downing of Malaysian Airlines flight 370 over eastern Ukraine, apparently by a Russian-supplied surface-to-air missile fired by pro-Russian separatists, the Russian government and media and their minions have been working hard to supply alternative theories for the tragedy.

One of the more outlandish stories circulating on the Russian side is that MH 370, the Malaysian jet that disappeared somewhere in the Indian Ocean, was actually captured by the United States, and all its passengers and crew killed and drained of their blood, so that the U.S. could secretly have the plane full of corpses and explosives take off from the Netherlands with a crew that parachuted to safety while the plane continued on autopilot to be detonated over Donetsk. (Reported by Julia Ioffe of the New Republic.) This apparently springs from the claims of a separatist leader, Igor Girkin, quoted by the website Russkaya Vesna.

So far, Putin has tried to deflect blame onto the Ukrainian government, not teh gayz. But it's not such a stretch to imagine that he could cast aspersions our way if it suited his purposes. He previously claimed that the protesters who brought down the previous Ukraine regime are "gay nazis," and his government has done much over that past few years to criminalize gays.

On another point in this cartoon, the fog of war made it difficult to nail down a number of what I chose to call "health experts" who died on their way to the HIV/AIDS conference in Austrailia. I hoped that "health experts" was general enough to include medical professionals, activists, and reporters who may only have intended to observe the conference. The initial number I heard reported was 100-- over a third of MH 17's passengers.

Subsequent reports used the vague term "dozens"; after I had sent the cartoon to my editors, I saw a report that said there were six. So I apologize for my part in perpetuating what is almost certainly an example of hyperbole borne of the heat of the moment.
Posted by Paul Berge at 12:20 PM No comments:

Perhaps I won't feel the need to explain what this week's cartoon is about.

And do you ever have one of those dreams where you've gone to work and you realize you forgot to put your clothes on?
Posted by Paul Berge at 6:31 PM No comments: 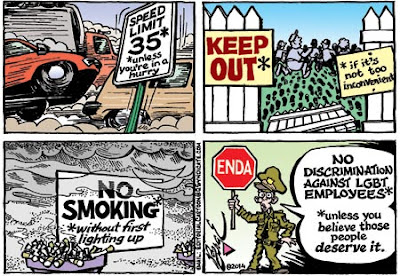 The Supreme Court's free pass to Burwell v. Hobby Lobby continues to have a ripple effect beyond the immediate scope of its ruling, despite its author's claims to the contrary. Spurred by the Supremes' ruling, the ACLU, National Gay and Lesbian Task Force, Gay and Lesbian Advocates and Defenders, Lambda Legal, the National Center for Lesbian Rights and the Transgender Law Center have withdrawn their support of the Employment Non-Discrimination Act (ENDA) in its current form.

At issue is language in the bill that would allow some employers to discriminate against LGBT employees on religious grounds. From the ACLU statement:

Given the Court's tendency to favor any claim of religious freedom as long as it doesn't involve psychotropic drugs, the so-called religious liberty clause in the bill means that it could apply only to employers who were unlikely to discriminate against LGBT employees in the first place. Discrimination against LGBT persons in any way, shape, or form, is almost always clothed in religious garments. Unless the spectre of showering together raises its prurient head.

The Human Rights Campaign and Log Cabin Republicans remain committed to ENDA in whatever form might make it through Congress, although there is very little likelihood of John Boehner allowing it to come to the House floor for a vote.

Which is nothing new. ENDA was first introduced by Rev. Bella Abzug twenty Congresses ago. If you were facing antigay discrimination in the workplace then, chances are you are facing retirement now.
Posted by Paul Berge at 8:47 AM No comments:

What, you don't think highway safety is an LGBT issue?

Tune in again later this week when all will be made clear.
Posted by Paul Berge at 8:24 AM No comments: 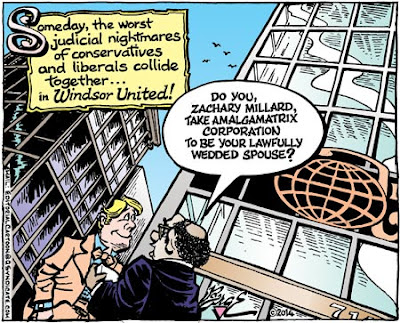 Corporations are people, too, my friend.

Among the challenges in this week's cartoon was coming up with a name for this faceless Corporate-American citizen. I realized after I had sent my idea proposal to my editors that I had neglected to google "Amalgamatrix" to make sure that there was not any actual corporation with that name.

Happily, it appears only to be part of the name of a CD by a band I'd never heard of and a screen name for (presumably) a handful of its fans. I'm so relieved that there's no need to worry about having hurt some corporation's feelings.
Posted by Paul Berge at 7:48 AM No comments:

I was reading a Christian Science Monitor cover story on "Obama and Race" yesterday, and in one of the sidebar articles, Little Rock, Arkansas resident Chane Morrow was described as a "lifestyle artist." 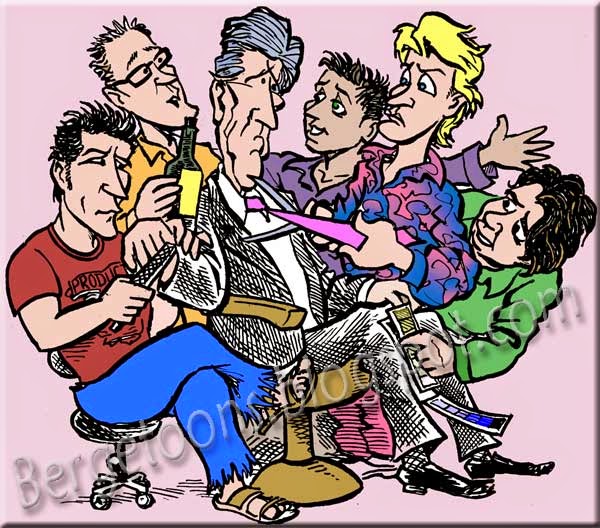 I've heard of "lifestyle coaches," the people such as the Queer Eye for the Straight Guy crew who come into your home and throw out all your clip-on ties. But what the hell is a "lifestyle artist"?

The top result when I googled the term was the LinkedIn page of a guy in Singapore who defines it as "someone who take responsibility of their own lives and then proceeds to create their ideal lifestyles. Very much like how an artist works."

My ideal lifestyle, as it turns out, is to become a Lifestyle Art Critic.

So here, in no particular order and with no moral judgment, are my top ten Lifestyle Artists of all time -- realizing, of course, that actual artists do not qualify:

Posted by Paul Berge at 2:48 PM No comments:

Did someone call for a drone strike?

A daring young man on the flying trapeze?

Underdog?
Posted by Paul Berge at 4:17 PM No comments:

CNBC's "Squawk Box" was discussing the lack of any openly gay CEO's among the Fortune 500 when co-host Simon Hobbs stunned his fellow panelists by offering, "“I think Tim Cook is fairly open about the fact he’s gay at the head of Apple, isn’t he?”

After an awkward silence, James B. Stewart (on the show to discuss his book on the topic) answered, "Um. No."

Mr. Cook has given generously to and advocated for LGBT causes, runs a gay-friendly company, and last week again marched with his employees at San Francisco's Pride parade. But he has not discussed his personal life in public, nor has he been publicly linked to anyone romantically. 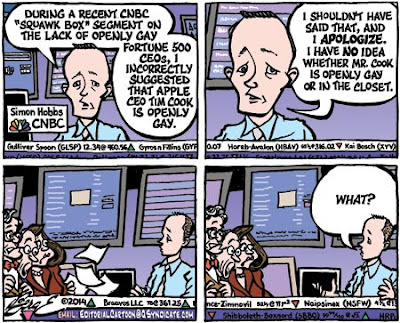 Which isn't stopping me from having a little fun with the story.

Have a happy Fourth o' July everyone!

Posted by Paul Berge at 7:56 AM No comments: