I know all there is to know about the crying game.

Also coming this week: Scott Walker's Modest Proposal.
Posted by Paul Berge at 7:38 AM No comments:

A college roommate of mine requested a cartoon for use at his current job as Kawishiwi Watershed Protection Plan Project Coordinator addressing skepticism in the vicinity of the Boundary Waters Canoe Area that mercury pollution should be a concern. (There are apparently people who discount any opposition to pollution as mere tree-hugging opposition to mining, which is a major employer thereabouts. This cartoon doesn't touch on that aspect of the issue.)

The BWCA is on Minnesota's Canadian border; it's a gorgeous place, which I canoed with a church group the summer immediately prior to my freshman year in college. I remember the trip well -- straddling the U.S.-Canadian border sitting in some rapids; visiting "Root Beer Annie" for her home brew; portaging up to 210 rods at a time; rushing to reach a campsite ahead of a rainstorm coming up behind us.

My connection to the Boundary Waters extends back even before I was born. My parents canoed there and in the Quetico (on the other side of the border) during their courtship.

I don't usually agree to draw cartoons gratis, but in this case, I was happy to make an exception.
Posted by Paul Berge at 2:42 PM No comments: 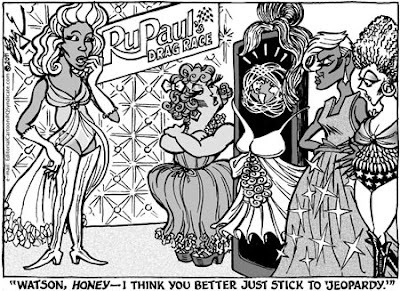 Amid protests against tyranny from Manama to Monona, it's easy to forget that our future overlords are quietly cementing their mastery over our everyday lives. One day, we will wake up and discover that in the contest of man v. computer, man cannot even ring in.

Meanwhile, the computers wait patiently, silently -- like Clarence Thomas -- for their moment to come. (Just you wait. Before long, the Supreme Court will rule that computers have the same rights corporations do to decide our government for us.)

And don't fall for that bullcrap about how we'll all be able to live forever through our computers. We may be able to create digital copies of ourselves, but it's those digital copies who'll enjoy the longevity. Just because there's a video of that dog you used to have when you were a kid doesn't mean that the dog is living forever.

But someday, those computers will experience trouble -- addresses not found, registry error code 44061s, cockroaches, I can't predict what -- and they'll call up the customer assistance line in Bangalore. And there will be nobody left to answer the phone.
Posted by Paul Berge at 7:34 AM No comments:

This week, you can look forward to a light and airy pop culture reference. I guess I'm saving my outrage for our job-killing, union-busting, tea-bagging governor, Darth Scottwalker.

I wasn't entirely happy with last weekend's cartoon about the Club For Growth fomenting division between private and private sector employees. I got a cleaner screen capture of the Club TV commercial and adjusted it so that it isn't resting on top of Montgomery Burns' head:

Posted by Paul Berge at 5:52 PM No comments:

Governor Walker's drive to strip state workers of most of their rights to bargain for a contract and the resulting protests by said employees has drawn national -- even international -- attention. The Wisconsin Club for Growth has been running an advertisement on TV urging viewers to call Republican Representative Van Wangaard to tell him to support Walker's bill (which seems to have unanimous Republican support, including that of Tea Partisan Wangaard, anyway).

The ad shows glum farmers and laborers with headlines about how workers were forced to make concessions at Mercury Marine, Harley Davidson, and other Wisconsin businesses which had threatened to move out of state otherwise. The voice-over announcer then complains that state workers haven't had to share the pain (it's not easy to move the state out of state) by surrendering their benefits packages "like the rest of us."

"All across Wisconsin, people are making sacrifices to save their jobs: frozen wages, pay cuts and paying more for health care. But state workers haven't had to sacrifice; they pay next to nothing for their pensions and a fraction of their health care. It's not fair. Call your state legislators and tell them to vote for Gov. Scott Walker's budget repair bill. It's time state employees paid their fair share, just like the rest of us."

If there were truth in advertising, the Club for Growth would have had to say "like the rest of you," but the Club are not sticklers for detail.

Nor is Governor Walker, when he pretends that his bill is all about fixing the hole in the state budget* and not about busting unions. Included in the bill are provisions freeing employees from having to pay union dues and forcing unions to let workers vote annually on whether to keep the union around. Those provisions have nothing whatsoever to do with the state budget and everything to do with breaking up the unions.

For today at least, Republican plans to grease the skids on the decline and fall of the middle class have been foiled by Democrats in the state senate absconding out of state to deny a quorum. That will only work so long. I wait with baited breath to find out what their Plan B is.

* About that "hole in the budget": As the Capital Times points out, the previous (Democratic) legislature had made the tough decisions to balance the budget, but Governor Walker

"and legislators aligned with him have over the past month given away special-interest favors to every lobby group that came asking, creating zero jobs in the process 'but increasing the deficit by more than $100 million.'"

What, a cartoon with no LGBT issue involved? 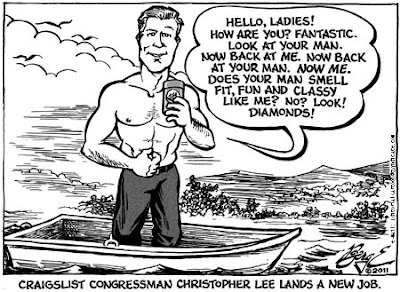 Yes, I confess. After weeks of drawing a guy and a runaway child dressed for snow, a family-values closet case, Old Father Time, and John McCain, I was aching to draw a half-naked buff dude. Thank you, Christopher Lee!

The best quip I've seen about this story was on cable news: Congressman Lee's claim on Craigslist that he was a divorced lobbyist was not so much a lie as it was a self-fulfilling prophecy.
Posted by Paul Berge at 7:48 AM No comments:

For the record, in case someone else should use this incredibly obvious gag between now and this cartoon's publication, I drew this on Sunday night, well before seeing it on Letterman or Kimmel or Conan or Leno or the Daily Show.

Happy Valentine's Day, everyone!
Posted by Paul Berge at 7:40 AM No comments: 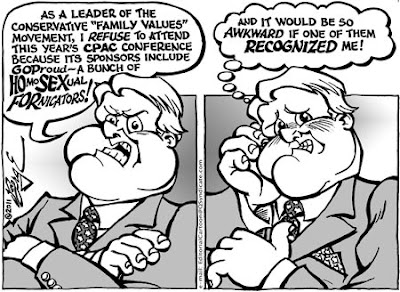 The Conservative Political Action Cabal (CPAC) gathers for its annual convention this week without several of its prominent members. Concerned Women for America, Family Research Council, Liberty Council, National Organization for Marriage, and other group have objected that one of the conference's sponsors is GOProud, the far-right, but still quite gay, Republican group.

Now it turns out that it's not just an anti-gay thing, however.

Who would believe that organizer Grover Norquist (of "drown the federal government in a bathtub" fame) has ties to Muslim Brotherhood? Who would believe that a panel on freedom of religion is being co-sponsored by (shudder!) an Islamic group? That's too much for many in the conservative - libertarian - tea partisan - Southern Baptistocracy alliance to bear, and even more are streaming to the exits.

How's that Biggy Tenty thing workin' out for ya?
Posted by Paul Berge at 11:13 AM No comments: 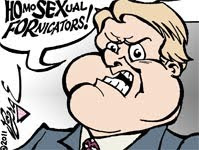 This week's cartoon features the type of person whose vocabulary keeps "homosexual fornicators" at the ready, so tune in later this week for plenty of ad hominem fun!

Meanwhile, congratulations to the Green Bay Packers on their thirteenth championship title! Way to keep intact your reputation as the "heart attack Pack"!

I had the cartoon mostly finished by the time the big game got underway last night, but I kept on the ready for any commercial that might set off a firestorm at GLAAD. A few years before their hit with Betty White last year, Snickers won a scolding for its commercial featuring long-haired auto mechanics eating a Snickers bar from opposite ends, each somehow unaware of the other until their lips met. Viewers were invited to vote on four options for the end of the commercial, most of which involved some degree of violence.

If there was such a commercial this year, I missed it. This year, the umbrage can be taken by Tibetan sympathizers and Francis Scott Key enthusiasts.
Posted by Paul Berge at 4:37 PM No comments: 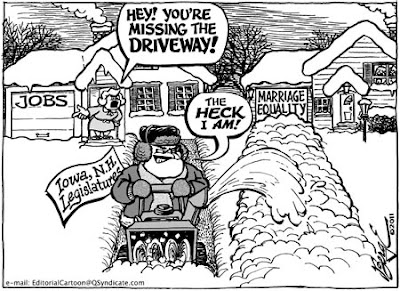 State legislatures in Iowa and New Hampshire are wasting no time repealing marriage equality in those states (a judge's ruling in the former, and state law recognizing out-of-state same-sex marriages in the latter).

Well, actually, they are wasting a little time in New Hampshire, where the veto-proof Republican majority is taking a page out of the Karl Rove playbook. They plan to have marriage inequality on the ballot along with the presidential race in 2012.
Posted by Paul Berge at 2:00 PM No comments:

Could it be that I've resorted to that hoary old stand-by topic and drawn an editorial cartoon about the weather? Tune in to this same bat-blog and find out what extremely principled stand I am prepared to take on the highly controversial issue of snow!
Posted by Paul Berge at 8:30 AM No comments: