At the close of every year for the last four decades, I've taken a picture of newspaper headlines from the year gone by. These pictures originally served as a sort of bookmark in my photo albums, back when using rolls of film limited the number of pictures I'd take, and I'd put every photo into an album.

I don't do that with my thousands of digital photos, but I've kept up the habit of taking these headline photos. Here's to 2013: 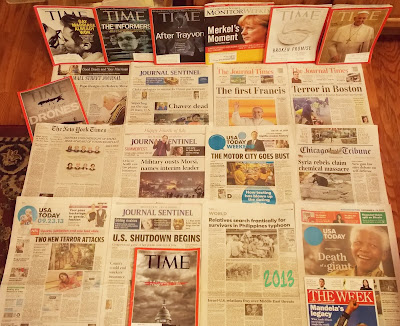 You can click on the photo to embiggenify it; even then, that New York Times headline about the Supreme Court gutting the Voting Rights Act of 1964 is pretty tiny.

In closing, if your 2013 has been in any way less than you had hoped, I wish you a happier and brighter new year.
Posted by Paul Berge at 8:04 AM 1 comment:

I was actually struggling to come up with an angle to approach the Utah marriage equality story until I saw the National Organization for Marriage's Brian Brown on Up yesterday morning.

I'll be back when my newspapers have had a chance to get this cartoon out in print.
Posted by Paul Berge at 8:09 AM No comments: 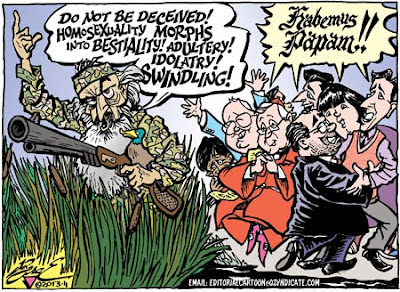 One could argue that highlighting Duck Dynast Phil Robertson's antigay comments in GQ Magazine only serves the purposes of Sarah Palin, talk radio, and all the Foxsters out there complaining that A&E is trampling his right of free speech. Not that they ever came to the defense of free speech rights for, say, Martin Bashir, Alec Baldwin, or Keith Olberman.

His opinions regarding African-Americans are the more ridiculous and worthy of censure. But I draw for the LGBT media through Q Syndicate, so I'm afraid I must leave to others his claim that Blacks were happier before civil rights and antipoverty programs ("No one was singing the blues"). I would, however, like to assuage Mr. Robertson's fears that anatomy poses an insurmountable difficulty to gays' and lesbians' ability to have and to enjoy sex. We really are not bothered by it anywhere near as much as he is.

Meanwhile, this Greek chorus of conservative American Catholics makes its second appearance in my cartoons this week. (Here's their first appearance, in September.)
Posted by Paul Berge at 9:59 AM No comments:

Since this week's cartoon is meant for publication after Christmas, I assure you that this is not Santa Claus.

Posted by Paul Berge at 8:21 AM No comments:

This is a front-page cartoon I drew for the UWM Post back in 1992. Sadly, this oversized sheet (slightly larger than the actual front page of the newspaper) is one of the pieces which suffered water damage when our basement flooded this spring. But I present it as another example of Messing With Santa: 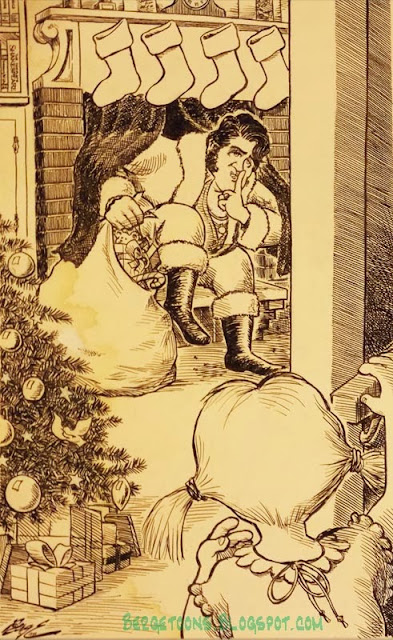 Merry Christmas -- Season's Greetings -- Are You Lonesome Tonight?
Posted by Paul Berge at 6:39 AM No comments:

Q Toon: Some Children See Him 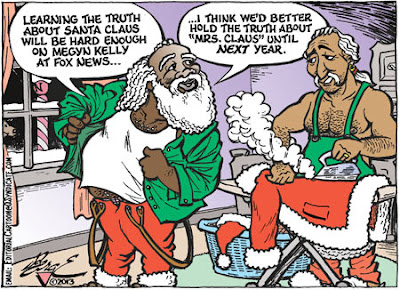 This isn't the first time I've drawn a cartoon outing Santa Claus, which shouldn't surprise anyone who realizes that I've been drawing for an LGBT media syndicate for 16 years. The owner of the syndicate back in the '90's (a traditionalist Jew, as it happens) thought that one such cartoon would offend Christian readers. I guess he figured that Santa Claus was a religious figure to some people.

Yes, I know he's sort of based on St. Nicholas, the Anatolian Christian from the third and fourth Century. But as far as I know, no Christian sect believes that Hagios Nikólaos lives at the North Pole with his cadre of elves and flying reindeer, temping at Macy's and sliding down chimneys in the middle of the night.

Except, perhaps, the Palins.

Posted by Paul Berge at 8:04 AM No comments:

This week's cartoon is for the polar bears.
Posted by Paul Berge at 4:32 PM No comments: 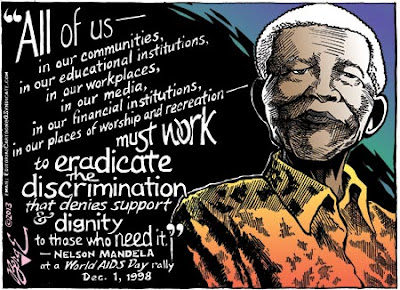 The death of a beloved, historic figure presents editorial cartoonists with both opportunity and challenge. Our memorial cartoons tend to be our most popular works; but for most of us, it's not enough to draw something saying that, gee, it's sad someone's gone. A cartoon that is truly worth the effort should say something unique and memorable about the person eulogized. The best do so simply and directly: Joe Heller produced his tour de 46664 within hours of the news breaking that Nelson Mandela had died.

Like many cartoonists, I often look for quintessential quotations on these occasions. At first, I wanted to draw a cartoon with Mandela's quotation that "to be free is not merely to cast off one's chains, but to live in a way that respects and enhances the freedom of others." But Scott Stantis and David Horsey used that statement from Mandela's Long Walk to Freedom in their cartoons on the AAEC web site the very next morning.

Not being on a daily deadline, I still had some time to find just the right quotation, so I wasn't worried about other cartoonists using all the good ones before mine made it to print. (Although I didn't foresee Keith Knight's memorial cartoon, for which one single quotation just wasn't good enough.) I spent several hours combing through his speeches on the African National Congress web site.

I settled on a 1998 speech marking World AIDS Day. Late in his presidency and into his retirement, Mandela became a campaigner for HIV/AIDS awareness; the disease had not yet claimed the lives of his son and daughter-in-law at the time of the speech quoted in my cartoon. I didn't get a World AIDS Day cartoon done in time for December 1 this year, so, tardy as it is, my cartoon this week pulls double duty.
Posted by Paul Berge at 7:20 AM No comments:

In lieu of This Week's Sneak Peek, I offer a cartoon I drew in September of 1989. The speaker in the cartoon is South African Prime Minister F. W. deKlerk, making an announcement after months of police beatings of anti-apartheid demonstrators. 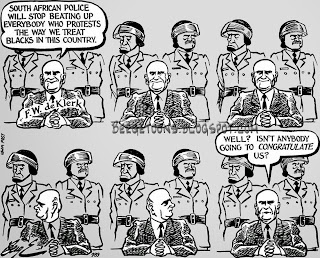 As the world celebrates the life of Nelson Mandela, it's striking to read educators and others remarking that students and young adults today do not know anything about him. And yet, trying to think back for an analogous case for my generation, I suppose some of my high school classmates had heard of the 1956 uprising in Hungary, but very few would have been able to identify Imre Nagy.

I went to college during a time when there were loud calls for colleges and university to divest from South Africa over its apartheid policies -- a hot-button issue at the time. The Soweto riots made headlines around the world, as did the death in police custody of Stephen Biko. America joined a wave of nations imposing sanctions against South Africa in 1986 only after the U.S. Congress overrode Ronald Reagan's veto. 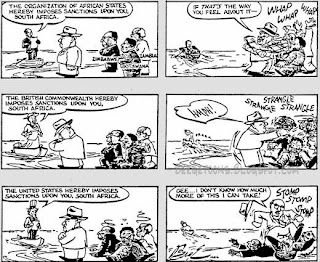 The first cartoon I ever drew about South Africa was inspired by the film "Last Grave at Dimbaza" in 1975 or so. I no longer have the cartoon, which showed an armed white South African in pith helmet and safari gear using a dug grave as a warfare trench. I later discovered that Milwaukee Journal cartoonist Bill Sanders had drawn pretty much the exact same cartoon a few months earlier.

In spite of that sketchbook caricature of Nelson Mandela that I posted the other day -- drawn somewhere around the time that he was released from prison after 27 years -- I don't appear to have drawn him in any cartoons for publication at the time.

In memory of one of the greatest political leaders of our time: 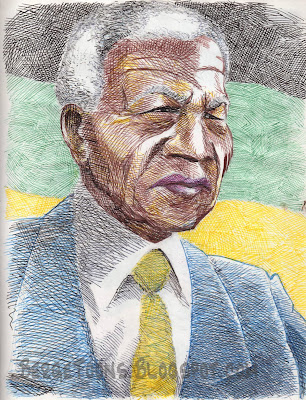 South African President Nelson Mandela passed away today at the age of 95. I drew this caricature of "Madiba" sometime around 1990 or 1991 as an early experiment with colored india ink.

The colors in the background are of the flag of the African National Congress (ANC); I don't recall whether the current South African national flag had been created at the time I drew this in my sketchbook. Either way, it's very unlikely that I would have had a picture of that flag handy before the 1992 Olympics.
Posted by Paul Berge at 5:22 PM No comments: 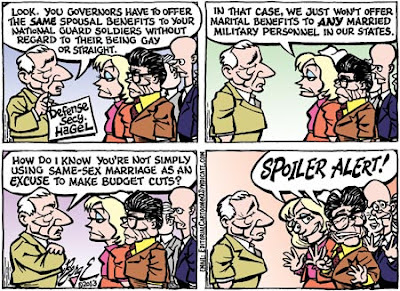 In August, Defense Secretary Chuck Hagel announced that, in keeping with the Supreme Court ruling striking down the Defense of Marriage Act’s denial of federal benefits to legally married same-sex couples, spousal benefits must be given to the legally wed same-sex spouses of military personnel.
Governors in several red states with marriage inequality written into their state constitutions announced that they would refuse to extend those benefits to National Guard personnel in their states.

As of mid-November, National Guard units in eight states —Texas, Mississippi, Louisiana, Oklahoma, Georgia, Florida, South Carolina and West Virginia — were refusing to process applications for benefits at Guard facilities,  or issue the identification card needed to claim benefits and access medical services on the Guard member’s home base.
Since then the situation has improved somewhat. West Virginia changed course and Texas struck a deal with the Pentagon, under which federal personnel enroll same-sex spouses at state facilities.
Oklahoma, Florida and South Carolina, which were forcing same-sex spouses to travel to federal facilities in order to apply for benefits, are now subjecting all spouses to that trek. (That’s one way of achieving equality.)
That leaves only three states, Mississippi, Louisiana and Georgia, in outright rebellion.

I guess I should have drawn South Carolina Governor Nikki Haley in this week's cartoon instead of Texas's Rick Perry. I did, however, include Mississippi Governor Phil Bryant. Well, sort of. He's that shock of white hair hiding behind Perry and Oklahoma Governor Mary Fallin.
Posted by Paul Berge at 12:02 PM No comments:

In recent years, shaken by 9/11 and the rise of autotune, Maria took a heightened interest in issues of security, law, and order. She had entered a new career in law enforcement when the Occupy Movement sprang up across the country. 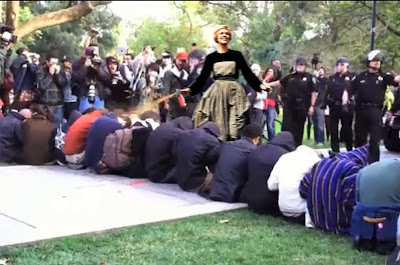 Now, some may accuse me of shilling for NBC's live production of "Sound of Music" tomorrow night. I can only repeat that Paul Santo and I started this game completely independently of anything NBC Universal was doing.

If anything, I think NBC is trying to ride on our coattails.
Posted by Paul Berge at 7:43 AM No comments:

There's not a whole lot of mystery to this week's sneak peek, particularly with that lovely label helping out.

I hope you all had a wonderful Thanksgiving, and that the leftovers last a full eight days and nights.
Posted by Paul Berge at 4:03 PM No comments: