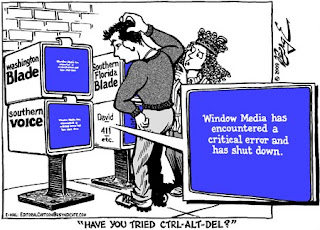 The good news is that the staff of the affected publications have busted their buns to put out new product under new flags.
Posted by Paul Berge at 7:57 AM No comments:

The Wisdom of Sarah Palin

"If God had not intended for us to eat animals, how come He made them out of meat?"

The archdiocese of Washington D.C. is threatening to shut down its social service agencies if the city council passes a marriage equality ordinance. Homeless shelters, food banks, and other services to the poor would be halted so that the church can fullfil its true mission: battling homosexuals. 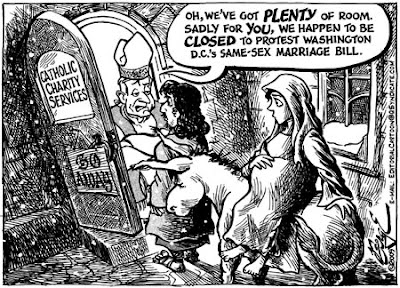 At the risk of rushing the Christmas season, here's my take on the issue.
Posted by Paul Berge at 8:20 AM No comments:

"[H]istory is filled with heroes. You may remember the stories of a grandfather who marched across Europe; an uncle who fought in Vietnam; a sister who served in the Gulf. But as we honor the many generations who have served, all of us -- every single American -- must acknowledge that this generation has more than proved itself the equal of those who've come before.

We need not look to the past for greatness, because it is before our very eyes."

--from President Obama's remarks yesterday at Fort Hood.
Posted by Paul Berge at 4:48 PM No comments: 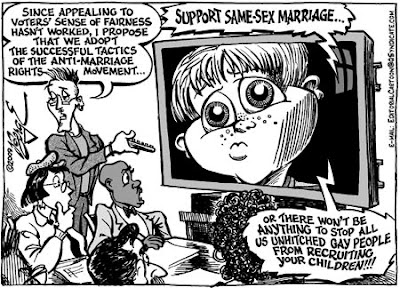 The anti-marriage movement overturned marriage equality in the state of Maine by repeating the ridiculous charge that allowing same-sex couples the rights and responsibilities of marriage would result in having to teach schoolchildren how gay people get it on. The pro-marriage side's efforts showing real-life families and how they are affected by marriage rights and the lack thereof couldn't win out against the frightening thought of some hypothetical kindergarten class learning what some hypothetical classmate's two daddies do in the bedroom by watching a hypothetical Colt video.

Meanwhile, here in Wisconsin, the state Supreme Court has declined to hear a Wisconsin Family Action lawsuit to overturn Domestic Partnership benefits in our state. Given the bought and paid for majority of conservative justices on the court, it seems unlikely that a majority of the court disagrees with the WFA position that domestic partnership benefits are a violation of the constitutional amendment approved by 1.2 million Wisconsin voters in 2006 which prohibits the state from recognizing same-sex marriages or any other "substantially similar" legal arrangement.

More likely, some of the conservatives didn't want to set a precedent by allowing WFA to skip over the lower courts by taking their case directly to the Supreme Court. That's simply my guess, since the court did not issue any statement with their decision; but that fits in with my suspicion that a majority reached the conclusion not to hear the case for entirely different reasons from each other.

The court has heard arguments in a separate case charging that the 2006 referendum on the constitutional amendment improperly put two separate questions before the voters in the same ballot issue: namely, whether the state would recognize same-sex marriages on the one hand, and whether the state would recognize "substantially similar" legal arrangements. Theoretically, a voter who was against same-sex marriage but in favor of allowing a "substantially similar" alternate arrangement would be forced to vote against his/her convictions with either a yes or a no vote. A decision in the case is still pending, but it's hard to imagine Gableman, Ziegler, Prosser and Crooks finding a conservative-sponsored constitutional amendment unconstitutional.

It's also hard to imagine that should our domestic partnership be nullified by the Supreme Court, Chris and I would be able to get our filing fees back.
Posted by Paul Berge at 12:39 PM No comments: 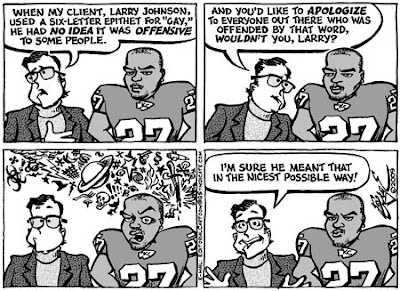 I had to draw this week's cartoon well before the marriage equality vote in Maine was known, so thanks to Dave Brousseau for alerting me to the Larry Johnson story. For anyone who hasn't followed this story, running back Johnson used an antigay insult (rhymes with maggot) at a press conference and in a Twitter tweet. It got him suspended for a game, whereupon his agent claimed that Johnson had no idea that anyone would actually be offended by the word.
Posted by Paul Berge at 7:44 AM No comments: 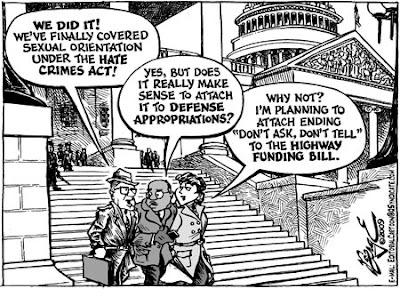 Somehow, I neglected to post the usual cartoon on this site last week.

It could have had something to do with having spent hours trying to download and install MacAfee on the home computer. The computer never did succeed at installing it, even though I did go through Add/Remove Programs to remove everything that sounded like it might possibly conflict with MacAfee. I've been through this before with my laptop; I couldn't renew Norton Antivirus while it also contained Webroot Antispyware, in spite of both programs having been on the laptop when I bought it. I also followed MacAfee's suggestion of completely wiping out the computer's browsing history, resulting in long download times and a number of sites that seem to get hung up on routine tasks, but not resulting in any ability to install MacAfee.

Once we gave up and downloaded the CA Internet Security Suite (which I hadn't realized was an option included for no additional charge in our Time Warner Roadrunner internet service), the MacAfee symbol appeared in the "tray" reporting that CA was our active antivirus program. Now I have to find someone at MacAfee's telephone bank who will refund my money and tell me how to find and remove their program. According to the e-mail confirming my purchase, I can get a refund within 30 days, but there's no phone number or link associated with that particular paragraph.

So anyway, here's last week's cartoon. What was it about, again?
Posted by Paul Berge at 1:57 PM No comments: