John McCain once said that if military brass supported changing the policy of "Don't Ask, Don't Tell," which requires any gay or lesbian service personnel to treat their personal lives as Top Secret, then it would be time to consider the matter. He didn't consider it very long. 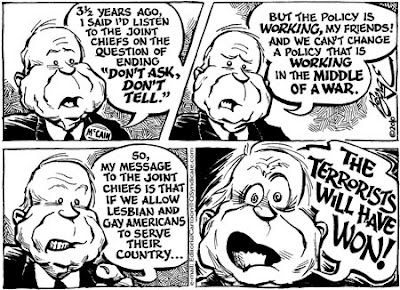 Posted by Paul Berge at 7:48 AM No comments:

Sneak Pique of the Week 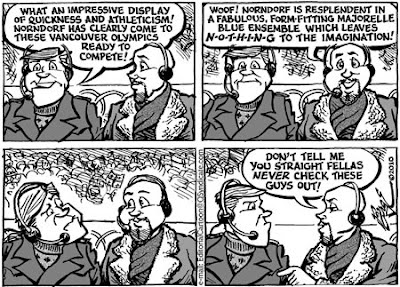 I realize that straight fellas get all nervous and uncomfortable with the thought that at a moment when they least expect it, some gay guy might be checking out his package. But any misgivings I had about this cartoon were dispelled the other night as my partner and I were enjoying Mardi Gras at a corner bar. The Olympics were playing on the two televisions: the U.S. women's hockey team was crushing the Russian team 13-0 on one set, while NBC's coverage of the men's figure skating was playing on the other.

The bar's loudmouth spent the entire time that Johnny Weir was skating loudly telling everyone how gay Johnny Weir is. Now, by that point in the evening, every bar has its very own loudmouth, maybe two or three; so chances are, there were many other places in the U.S. and Canada, Mexico, Argentina and Italy, as well as Russia, Khazakstan and Korea, where some loudmouth straight guy was spending ten minutes letting everybody know what a flaming faggot Johnny Weir is.

So here's gay sportscaster Jack Morningwood having his way with straight boy sensibilities. And did you notice that Bode Miller leans to the right?
Posted by Paul Berge at 7:32 AM No comments:

Email ThisBlogThis!Share to TwitterShare to FacebookShare to Pinterest
Labels: Olympics

Sneak Peek for the Week

This week's cartoon underwent a complete change of punch line during the drawing phase. This first frame, however, stayed roughly the same.
Posted by Paul Berge at 10:18 PM No comments:

Email ThisBlogThis!Share to TwitterShare to FacebookShare to Pinterest
Labels: Olympics 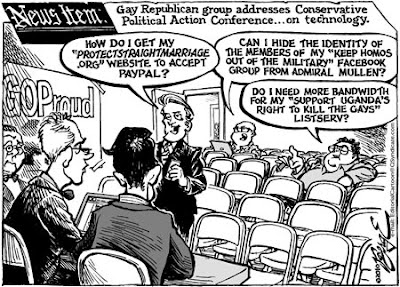 A fairly new gay Republican group, GOProud, will address this year's CPAC convention. As stunning as that news is -- the Log Cabin Republicans haven't been particularly welcome at Republican events -- GOProud will not be discussing any sort of commonality of any conservative and LGBT viewpoints.

No, the gay Republicans will talk about how conservatives can harness the power of the internet, cell phone apps, and social networking to carry forward the conservative agenda.

There hasn't been a harebrained scheme like this since the National Association for the Advancement of Conservative Colored People taught the Ku Klux Klan how to start fires and tie knots.
Posted by Paul Berge at 5:53 PM No comments:

I debated whether I ought to change the caption in this cartoon to more accurately reflect what Sarah Palin actually said to the Teabaggers over the weekend: "hopey changey stuff." But then, would I need to change the hand to "cynicky samy oldy policiesy ..." ?
Posted by Paul Berge at 7:28 PM No comments:

Gen. Obama and His Trusty Steed 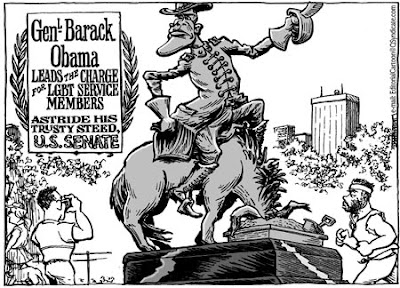 Here's the link to this week's Q Syndicate cartoon.
Posted by Paul Berge at 7:29 AM No comments: