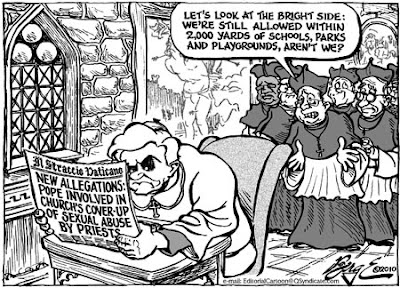 Priests accused of sexual abuse are supposed to be immediately suspended from their post, pending a church investigation of the charges. The boards of clergy and lay persons set up to review charges of sexual abuse by priests are, according to the report, appointed by bishops, who have been known to ignore the findings of such boards. Church officials have even refused to accept court judgments against pedophile priests as definitive.

I have to wonder how this compares with the process when a priest is accused of imbezzling from church funds.

By the way, alert readers of a certain age may find an allusion to a song by Tom Lehrer in this week's cartoon.
Posted by Paul Berge at 4:45 PM No comments:

Sneak peek for the Week

The topic for this week's Q Syndicate cartoon could hardly be about anything other than the latest charges in the neverending saga of pedophile Catholic priests -- in Ireland, Germany, and not far from me at a Wisconsin school for the deaf.

Several American cartoonists have weighed in on the scandal this week. The story made waves in Europe while most American cartoonists were dealing with the passage of Health Care Reform and its Republican/Teabagger wrath. Most American cartoons about the Catholic pedophile scandal have been pretty tame; not so with our European counterparts. (The link is to a page on Darryl Cagle's site; the cartoons may move around as more cartoons on the topic are added. As of this writing, there are about ten pages of Catholic Sex Scandal cartoons.)

My cartoon, while not drawn for the mainstream press, is still pretty tame -- especially compared with, say, Herbjørn Skogstad's. He doesn't have to worry about Bill Donohue suing his ass.
Posted by Paul Berge at 8:54 PM No comments:

The world is losing one of its precious few women cartoonists: Mikhaela Reid has announced she is stopping her ink bottle and putting her brushes in the drawer.

I've always enjoyed Mikhaela's "The Boiling Point," and it's a crying shame that it has to come to an end so soon. There aren't many women drawing editorial cartoons, and there is a valuable perspective lost because of that.

Now, I'm not saying that prenatal-Americans are to blame for this sad state of affairs, but is it any coincidence that Mikhaela Reid should decide to quit cartooning at the very moment when she is several months pregnant? Is it? You don't see babies-to-be shoving men cartoonists out of their jobs, do you? Why is it always the women? 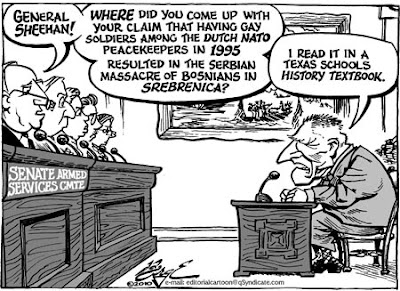 Retired General John Sheehan testified in front of the Senate Armed Services last week, alleging that back in 1995, the Dutch contingent of NATO peacekeeping soldiers at Srebrenica, Bosnia, were neutralized by Serbian militia; his reason for this was that the Dutch military allows gay soldiers to serve openly and honestly. Serbs slaughtered 8,000 Bosnian men and boys in the most horrific single incident of genocide in Europe since World War II.

Senators were dumbfounded, and the Dutch have taken great umbrage in General Sheehan's testimony:


In a statement, Dutch Ambassador Renée Jones-Bos said, "I take pride in the fact that lesbians and gays have served openly and with distinction in the Dutch military forces for decades, such as in Afghanistan at the moment."

"The military mission of Dutch U.N. soldiers at Srebrenica has been exhaustively studied and evaluated, nationally and internationally," Jones-Bos said. "There is nothing in these reports that suggests any relationship between gays serving in the military and the mass murder of Bosnian Muslims."

Investigations have found that the Dutch contingent in Bosnia was poorly trained and equipped, but even the officer cited by Sheehan as the source of the idea that allowing gay (and unionized) soldiers in the Dutch military facilitated the massacre has issued a denial:


Gen. Henk van den Breemen, Dutch chief of staff at the time of the Srebrenica genocide, called Sheehan's comments "total nonsense" and denied ever having suggested gays in the army might have played a role in the Srebrenica massacre.

--(Quotations from the Washington Post.)
Posted by Paul Berge at 7:21 AM No comments:

Here's a sneak peek at this week's Q Syndicate cartoon.
Posted by Paul Berge at 7:35 AM No comments:

If there's one thing Republicans do much better than Democrats, it's coming up with names for things. When Democrats pushed "Health Care Reform," Republicans trumped them with "Death Panels." Had the Democrats been pushing a "Rescuing Health Care Act," they might have retained the upper hand.

It should come as no surprise, then, that Democrats would think they might be able to get away with a tactic called "Deem and Pass," by which they could somehow approve the Senate bill without actually approving the Senate bill -- as if Republican attack ads for the rest of the year would take that nuanced approach.

By the way, I've got news for those few Democrats who voted to Rescue Health Care last December but have decided to vote No on Sunday: your Republican opponent will not let you get away with it. You're stuck with that Yes vote whether you like the Cornhusker Kickback or not. Just ask John Kerry how voting for a bill before you vote against it goes over with the voting public.
Posted by Paul Berge at 11:40 AM No comments: 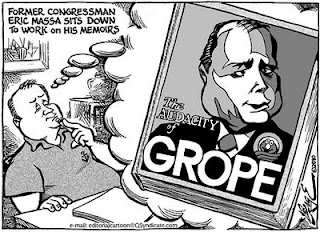 What to make of the train wreck that is freshly resigned New York Congressman Eric Massa?

We're so used to public officials clinging grimly to office when caught in scandal that his resignation immediately upon being accused of harassing his aides was simultaneously damning yet refreshing. Then he had to go and muck up the deal by accusing the administration of trying to push him out of Congress because he was a No vote on health care, proclaiming that Rahm Emanuel had accosted him naked in the House of Representatives' shower, adding "snorkeling" to the national lexicon, and ultimately becoming the latest act on Glenn Beck's Crying Circus.

What now for the not-quite-one-term congressman from New York's 29th? Look for him on upcoming seasons of The Apprentice, I'm a Celebrity Get Me Out of Here, the Today Show Window to the World, and Snorkeling with the Stars.
Posted by Paul Berge at 8:02 AM No comments:

It shouldn't be too difficult to figure out who this week's Q Syndicate cartoon is about.
Posted by Paul Berge at 6:32 PM No comments:

From the campaign trail

"America needs Republicans who will stand up to Barack Obama, not join him."

-- Senatorial candidate Marco Rubio, R-FL, in his opening TV campaign ad.
More proof positive that President Obama's efforts at bipartisanship are a complete and utter waste of time.
Posted by Paul Berge at 8:33 AM No comments: 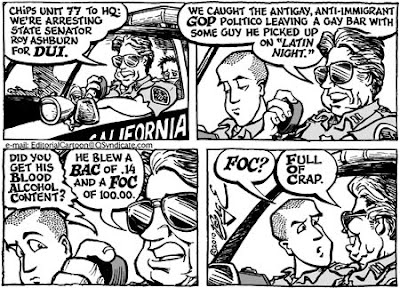 California State Senator Roy Ashburn (R-Bakersfield) was pulled over for drunk driving last week after leaving Faces, a gay bar. His passenger was someone he had met at the bar, which was having its regular "Latin night." The owner of the bar doesn't remember his having been there that night, saying that the middle-aged Caucasian would have "stuck out like a sore thumb," but others claim he's often been seen at various gay establishments.

Since his arrest, Ashburn has officially come out of the closet. He explains his antigay voting record as simply following the wishes of his electorate.


"My votes reflect the wishes of the people in my district, and I have always felt that my faith and allegiance was to the people there in the district, my constituents."

In fact, Ashburn is so sensitive to the winds of popular opinion in Bakersfield that he announced months ago that he wouldn't run for reelection.
Posted by Paul Berge at 6:59 AM No comments:

Sneak Peak of the Week

"CHiPS (premiere: Sept. 15, 8 p.m. E.D.T. on NBC). Since this series about the California highway patrol is the only new cop show of the season, prime time will soon have to live without a new cop show. Up against 'The Waltons' and the Osmonds, 'CHiPS' may not last out the month." 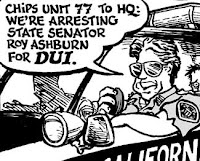 For this week's cartoon, I tried to imagine what California highway patrolman Francis Poncherello would look like if he were still riding patrol three decades later. He wouldn't have the personal trainer and whatever other help Erik Estrada has had to help him stay telegenic, and maybe doughnuts and beer would have taken their toll on his good looks.

But I left him his hairline. You know damn well that officer Jon Baker would be as bald as Terry Bradshaw.

Email ThisBlogThis!Share to TwitterShare to FacebookShare to Pinterest
Labels: CHiPS 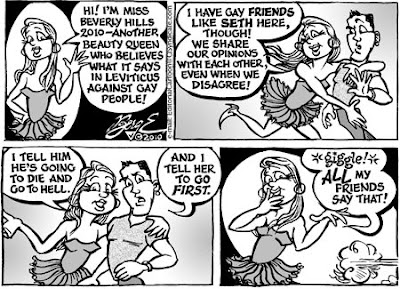 Following in the high heels of Carrie Prejean, an aspiring future Miss California tells the media that she opposes marriage equality because according to the book of Leviticus, gays are an abomination doomed to death and damnation -- but some of her best friends are gay, so don't be callin' her a hater. Why, she and her gay friends share their opinions all the time, says Lauren Ashley, who also calls herself Miss Beverly Hills 2010.

Apparently, none of her friends include the very people who would crown a Miss Beverly Hills 2010, since those people have been saying that they have no clue who this young lady is. Until last week, they thought she was a girls' clothing label.
Posted by Paul Berge at 7:55 AM No comments:

Sneak pique of the week

The star of this week's cartoon calls herself Miss Beverly Hills 2010. I mention that because the people who would ordinarily know who Miss Beverly Hills 2010 is don't know this girl. Her name is Lauren Ashley ... or Ashley Lauren ... or Courtney Madison or something like that. (Certainly not Hilda Weintraub.)

That's why I drew her introducing herself, instead of putting a label -- or a sash -- on her. There just isn't space in a single cartoon to explain, in addition to the point I'm seeking to make, that there is some question as to how or whether she earned the title of Miss Beverly Hills 2010. Or, for that matter, whether she might be habit-forming and cause dry mouth, restless bowel syndrome, sleepwalking, hysterical blindness, or the heartbreak of psoriasis without memory for the event.

Unfortunately, somewhere in the process of erasing and redrawing the pencil version, Beverly Hills inexplicably became Hollywood. I'll post the complete, repaired cartoon tomorrow.
Posted by Paul Berge at 7:30 AM No comments: