This Week's Cartoon in the Clutch 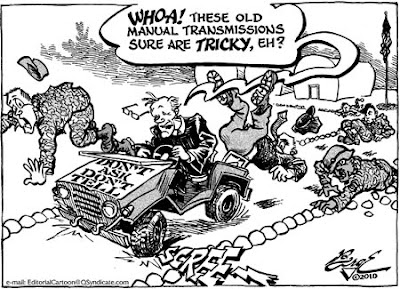 This week's cartoon is occasioned by the most recent ruling staying the penultimate ruling overturning the military's "Don't Ask, Don't Tell" policy, but it really would have been nice to get out one more cartoon prior to the midterm election.

When polls suggest that there is a serious chance that Tea Partisans who believe in repealing the 14th, 16th and 17th Amendments to the Constitution, in making it legal for corporations to bribe foreign governments, in returning control of health care to insurance company profit managers, in teaching superstition as science, in allowing our major auto manufacturers and all the businesses that depend on them to go out of business (not to mention allowing cascading bank failures on a scale not seen since 1929), in trusting against experience that tax cuts for the richest 1% will ever trickle down past the next richest 1%, and in attacking whatever minority is convenient when their economic theory goes bust -- when there is a serious chance that these cretins will take over the House, the Senate, and the legislatures handling apportionment for the next decade, I find the task of boiling that prospect down into one cartoon daunting in the extreme.

When the alternatives in many races are spineless Democrats running away from their base in a futile effort to convince voters that they really really really are almost like Republicans, however, it's equally hard to muster any enthusiasm.

How can one explain the Milwaukee Journal Sentinel endorsing Scott Walker for Governor after his disastrous record as Milwaukee County Executive?


The county's Mental Health Complex has been so badly managed under his watch that vulnerable people have been needlessly victimized. His budgets have failed to meet the need, even as overtime salaries for some complex employees boggle the imagination. The Milwaukee County Transit System has suffered route cuts and fare hikes, a victim to diminished county revenues and lack of vision. The state took over what state officials said were badly managed public assistance programs - though county officials said those programs simply were underfunded by the state.

We differ with Walker on some of the stances he's taken during this election. Stopping the fast train between Milwaukee and Madison reflects the kind of fiscal conservatism for which he is known, but it still is shortsighted.

Also of concern was his answer to whether he would support state legislation to require the shadow groups pouring in millions of dollars into surrogate ads to reveal their donors. We fear he would veto such efforts.

We worry about his views on embryonic stem cell research, which holds great promise for treatment of a variety of ailments. Wisconsin is a world leader in this important work. In the past, Walker has gone so far as to say he would sign a bill banning such research. More recently, he has been less strident, saying, "I'm going to put the money (state funding) behind adult stem cells - not embryonic." That would be a colossal mistake. ...

Barrett, meanwhile, has run a spirited, though at times too negative, campaign. His jobs and deficit proposals are far more detailed than Walker's and should be considered even if he's not elected. ...

We would hope the Legislature would right-size Walker's proposal for broad tax cuts that would threaten to deepen the state's budget deficit. On this point, Barrett's targeted tax cuts are the better approach.

Fat chance of our probable Republican legislature "right-sizing" Walker's tax cuts! The only reason he hasn't bankrupted Milwaukee County is because there is a majority on the County Board willing to stand up to him. (And what part of Walker's campaign has been positive? None of the commercials I've seen. Tom Barrett's campaign has been as positive as could be expected when outside interests have been attacking him mercilessly on TV since well before the September primary. Fercrysake, even the JS endorsement of Walker finds plenty to criticize Walker for!)

I cannot understand why the JS editorial board thinks that Walker and state Republicans, who have promised to be hard-line, partisan and doctrinaire, will be anything else once they control all three branches of state government plus the AG's office.

It's slapstick week here at the old drawing board...
Posted by Paul Berge at 7:23 PM No comments: 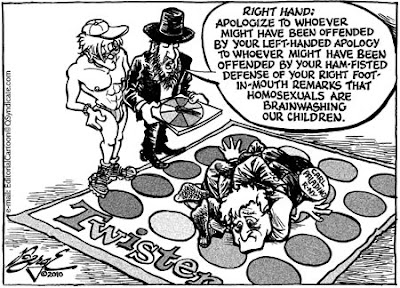 After making the rounds on TV defending his scripted remarks that gays are "brainwash[ing our children] into thinking that homosexuality is an equally valid and successful option," New York Republican candidate for U.S. Senate Carl Paladino eventually issued an apology -- which then prompted the Orthodox Jewish rabbi who hosted the original speech to withdraw his support of Paladino.

Perhaps the apology was prompted by the fact that Paladino's nephew, a gay man and a volunteer on his uncle's campaign, was publicly offended by the original remarks. If so, good for him; that's another argument in favor of coming out of the closet to one's relatives and friends.
Posted by Paul Berge at 7:44 AM No comments: 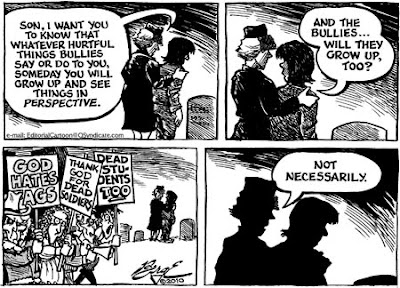 Posted by Paul Berge at 3:24 PM No comments:

Coming home to find that the frivolous cartoons I'd left behind for Q Syndicate to release during my vacation coincided with some decidedly unfrivolous events in the news, I felt obliged to draw something more somber this week.

I also decided to observe the serious side of National Coming Out Day. Anyone who knows me is (or ought to be) aware that I am gay, but since Coming Out is more an everyday process than a single event, I decided to wear a rainbow tie and a pink triangle lapel pin to church on Sunday. (I am organist at a moderately sized ELCA Lutheran congregation.)

I don't know whether there are any gay kids in the congregation at this point, but if so, I want to remind them that one can grow up gay and well-adjusted and without abandoning one's faith. The ones calling them "faggot" and teasing them about pole sucking or carpet munching do not get the last word on whether their lives are worth living.

Well, I hope that's what I'm reminding them of anyway. I hope I'm not that creepy old gay guy as far as the Kids Today are concerned.

And if I am, well, screw 'em. I'm too old to care that much what other people think of me.
Posted by Paul Berge at 4:29 PM No comments:

Email ThisBlogThis!Share to TwitterShare to FacebookShare to Pinterest
Labels: coming out


Last week's cartoon was drawn well ahead of time because I would be returning from my vacation on the day that I would ordinarily be drawing the syndicated cartoon. If not for jet lag, I suppose I could have pushed myself to whip off something more timely, but honestly, I could barely stay awake through the afternoon and evening. (Then I woke up around 1:30 a.m. and could hardly get back to sleep. I might as well have gone down to my drawing board after all.)

My editors suggested that I draw something in consideration of October being LGBT history month. With all that might have inspired me from Alexander the Great and James Buchanan; to Tchaikovsky, Rimbaud and Whitman; to the Mattachine Society and Harvey Milk -- I came up with this piece of fluff.

In this age of Manhunt and on-line chat, there may be a lot of gay people who have no idea what the "hanky code" was. Briefly, a guy would have a hanky sticking out of his left or right rear pocket. The color of the hanky corresponded to particular sex acts, and left or right indicated whether the guy prefered to be the one doing the act or having it done to him. There was no semaphore involved.

This cartoon gave me a chance to poke loving fun at some 1970's archtypes. One that I missed, however, was the drag queen -- sorry, female impersonator, or whatever the preferred term is today. The reason for the omission is that I wasn't confident of an image that would be quintessentially of the era. Barbra Streisand? Bette Midler?
Wonder Woman? 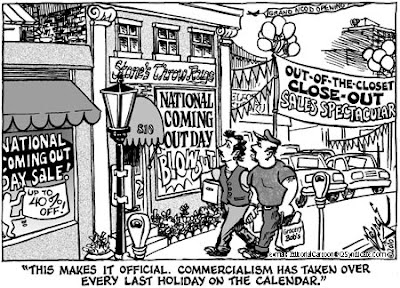 I'm still getting over my post-vacation jet lag, so here's the cartoon I drew for Q Syndicate to release last week. National Coming Out Day is actually October 11, but since some of the newspapers that print my cartoons publish every other week, this timing enables whichever of them wants this cartoon to print it on time.

I don't have a lot to say about this cartoon, other than I hope that I got it out ahead of all the cartoons about the ever earlier and earlier commercialization of Christmas.

And here's this week's sneak peek, by the way.
Posted by Paul Berge at 6:14 AM No comments:

I'm back from vacationing in France for the last couple of weeks; here's one of the cartoons released while I was away. 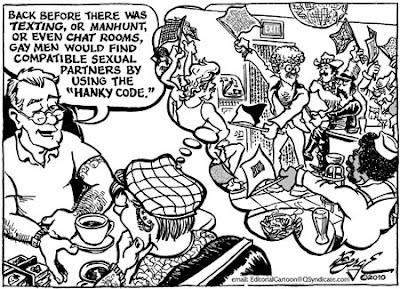 During my vacation, the Senate voted down the bill to end the military's antigay discrimination policy, which did indeed get coverage in the French press. I also read the news of the gay American college student who committed suicide after his roommate and others posted on line video of him having sex in the privacy of his dorm room. I wasn't in a position to draw cartoons about those news stories; instead, I had drawn a couple cartoons before I left on other topics. One of them is still slated for release later this week.

Also during my vacation, the Eiffel Tower was closed down twice because of terrorism threats, and the U.S. issued a travel warning that Americans should avoid going to popular tourist sites in Europe. We went to the Eiffel Tower, the Louvre, the Moulin Rouge and Monaco anyway, and had a swell time.

Europeans have been dealing with terrorism on their soil longer than Americans have. The IRA, Brigate Rosse, Baader-Meinhof and the like all predate Al Qaeda, and we can only hope that Al Qaeda and company will someday follow them into obscurity. We saw plenty of signs of a heightened security level on our vacation, starting with the machine gun toting soldiers in Charles DeGaulle airport as we arrived -- a bit startling to these American eyes, to be sure.

I also noticed that French TV didn't go into 24-hour coverage mode of the terrorist threat. The networks reported the story, provided context and detail, and then moved on to the next story. What I did not see were media commentators appearing to expound their own prognostications of what this might possibly mean for Nicolas Sarkozy, or how the terrorists would carry out their plans, or any of the usual U.S. TV yadda yadda yadda.
Posted by Paul Berge at 5:15 AM No comments: