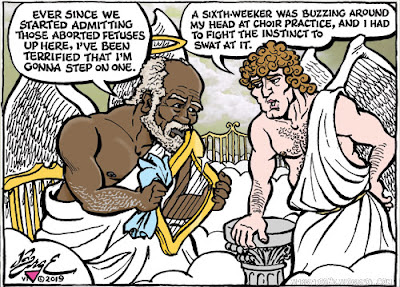 Whenever I see anti-abortion editorial cartoons depicting aborted fetuses in heaven, they're always drawn as full-term toddlers. In fact, extremely few abortions involve fetuses anywhere near that stage of development. But those cartoons wouldn't be half as effective if they depicted the fetuses during the first trimester of development.

So now Alabama, Georgia, Louisiana, Mississippi and Ohio (states, coincidentally, with some of the highest infant mortality rates in the nation) have passed laws that, for all practical purposes, criminalize abortions performed any time after pregnancy is detected — so early on that, if a cartoonist was being honest about it, he/she would have to label the fetus as human so that the reader wouldn't mistake it for a fetal camel or kinkajou.

Of course, I have no first-hand knowledge of what conditions are like in heaven. The Apostles' Creed posits that we believe in carnis resurrectionem, placing that tenet well after the section that is all about Jesus Christ and meaning that we all expect to come rising flesh and blood out of our graves, crypts, urns and wherever Donny Kerabatsos ended up.

Theologians with nothing better to do have spent centuries debating whether that means we come back to spend eternal life in a body in the same condition we left it in. If you ever had a limb amputated during your life, will you need to know where to find it if you want it back? Do you get to bring your dentures along? Will those who lived a good long life have reason to spend eternity envying those who died in their prime?

And what of the millions throughout history who never made it to the prime of life? Many of my generation will remember the story of The Littlest Angel, an eight-year-old who finds heaven to be an absolutely miserable place for little boys. If he couldn't sing in tune with the heavenly choir or keep his halo from rolling away down the Golden Streets, what hope does an eight-week fetal angel have?
Posted by Paul Berge at 3:52 AM