It's time for my annual snapshot of the Year In Front Pages, which is embiggenable if enclickulated: 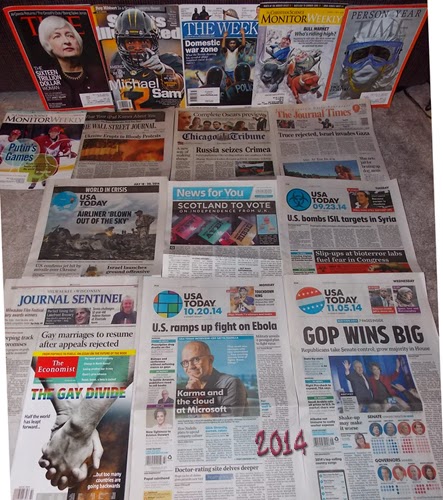 Newspaper front pages don't necessarily reflect the same news as the 24-hour news channels; a single headline seldom adequately encapsulates events that unfold over an extended period of time, such as this year's protests against police tactics, or the unsuccessful search for a missing plane.

Also, the ones I have access to tend to be Yankee-centric --hence "U.S. Ramps Up Fight on Ebola" and the lack of banner headlines about elections in India or the gunman who attacked the Canadian Parliament.

Thank you to everyone who has stopped by to read my little drawings this year. Best wishes, and we'll see you bright and early in 2015!
Posted by Paul Berge at 11:35 AM No comments:

Now that Sony has ended up putting out "The Interview" in "limited release," we'll be hearing from the people who have claimed that the hacking and threatening of Sony over the film was an inside job in order to gin up interest in the film. If they are right, the gambit seems to have worked.

I still tend to believe that the same sort of people who hacked PlayStation on Christmas will turn out to be the culprit, but what do I know?

Anyway, this fellow is not contemplating a ticket stub from his local multiplex. Tune in later this week to find out what his problem is.
Posted by Paul Berge at 6:45 PM No comments:


The cable channel still known as "The Learning Channel" plans to air a special in January titled "My Husband's Not Gay." As the cartoon explains, the show peers into the lives of a handful of gay Mormons and the women who married them plus one single gay Mormon guy in the market to marry such a woman.

I'm sure he's quite a catch.

We had some distribution problems with this week's cartoon, which is challenging enough with a midweek holiday. I had to send my cartoon files (a grayscale version, a high-resolution file for printing, and a low-resolution file for the web) to an alternate address which I apparently didn't have quite right. I've been cc-ing that address for years without getting any mailer daemon alert, so somewhere at Pridesource.com there is an untended email address filling up with cartoons.
Posted by Paul Berge at 10:46 AM No comments:

It must be the power and prestige.

A more definitive answer will appear at this general web address later this week.

In the meantime, Merry Christmas!
Posted by Paul Berge at 3:41 PM No comments:

I hardly ever have any reason to draw cartoons about North Korea, but since that overweight brat Kim Jong Un blew his top over The Interview and now nobody gets to see it, here's a cartoon I drew in 2005 when his daddy was still in charge. 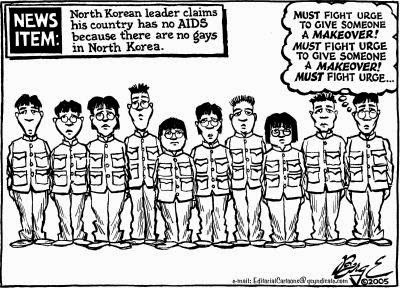 It's not as if there was any chance that I was going to shell out my hard-earned pay to see Seth Rogan's latest opus, but dammit, now any kid living out of his parents' basement with internet access can decide what films I can and cannot watch.
Posted by Paul Berge at 2:41 PM No comments:

The Michigan statehouse is cranking out what they call a Religious Freedom Protection Act, so that Jews can't be fired for refusing to work on the Sabbath. To protect Muslim butchers from being forced to offer pork roast to their customers. To guarantee Sikhs the right to wear turbans in their driver's license photos.

No, no, of course that's not the reason. It has nothing to do with the rights of religious minorities. Now that a tide of marriage equality is sweeping the land, something must be done to ensure fundamentalist Christians' right to discriminate against couples they don't like.
The other day, I read a blog post about "Writing People of Color (if you happen to be a person of another color)" by MariNaomi. The essay included an observation by Keith Knight that "Silly 'ethnic' names and stereotypical dialect should be avoided."

Well, shoot. There go my plans to name a character of color "LiBrarian Bookman."

I often have to give names to the generic people who speak in my cartoons -- at least in the pitch that I send to my editors, even if those names don't appear in the final product. (My editors and I are the only ones who know which is Abby and which is Zoe this week.) I have a page of my sketchbook dedicated to jotting down wordplay names as they occur to me, perhaps to be used later. A few betray an ethnic background, such as "Juan Thieu III."

I grew up in a generation who could expect to have three classmates named "Steve," four named "Mike," and a bunch of "Sues" and "Anns." At least one other classmate was guaranteed to have the same name as you. For variety, "John" might be spelled without the "h," or "Erica" with a "k" instead of the "c."

Many of my fellow baby boomers decided that their own children should have unique names, although the result was a flash flood one year or another of "Ryans" "Ashleys," and "Madisons." (If I give a character one of these names, my editors can tell exactly how old he/she is.) In a desperate attempt to forge uniqueness, many parents resorted to deliberately misspelling their children's names: "Riyann," "Aschleeigh," "Madicine."

I don't know whether African-Americans started this trend or were merely swept up in it along with everybody else, but I would argue that you'll find some of the most inventive names among African-American Gen-Xers, Gen-Yers and Millennials. Some parents found wonderful names by researching their heritage. Others just made baby names up out of random syllables.

This has resulted in a lot of confusion for the people who have had to deal with these babies as they grew older. I know of a teacher scolded by a student's mother for mispronouncing the name, which included a hyphen, of her daughter: "The dash don't be silent!" (Apologies to Mr. Knight for using stereotypical dialect, but that is a direct quotation.)

If parents of any color today are looking to saddle their children with unusual, even bizarre names, I can suggest leafing through Sinclair Lewis's It Can't Happen Here, with fellows named "Doremus," "Shad," and "Berzillius." The quack doctor in my cartoon last week, in fact, was named after an incidental character in the book.

All this is a roundabout way of cluing you in, dear reader, that there is an extremely obscure Merry Christmas reference in this week's cartoon somewhere.
Posted by Paul Berge at 10:32 AM No comments:

Uh-oh. Looks like these two, while dotting their i's and crossing their t's, inadvertently crossed an "l." And they're not Polish.

Or perhaps they've screwed up in a scavenger hunt.

All will be revealed sometime around Thursday.
Posted by Paul Berge at 3:55 PM No comments:

My copy of Time magazine's Person of the Year issue arrived in the mail today, and on page 16, there's a collage of covers of all 46 issues of the magazine this year.

It used to be that you subscribed to Time (or Newsweek, or U.S. News and World Report) and got 52 issues every year. 53 if there were a January 1 issue and a December 31 issue that year. Now there are at least six weeks during which they simply don't put out a magazine.


This week's cartoon applies only in the states of California and New Jersey, plus the District of Columbia, where laws banning "reparative therapy" to change a minor’s sexual orientation “including efforts to change behaviors, gender identity or expression, or to reduce or eliminate sexual or romantic attractions or feelings toward a person of the same sex or gender” have been signed into law. (Language from the D.C. bill.)

Court challenges by conversion therapy advocates to the California and New Jersey laws on the grounds that their exercise of religion was being infringed were both rejected. A court challenge to the D.C. law may be unnecessary, should the Republican Congress decide to step in. (Republicans talk a good game about "local control," but put them in charge of state and federal government, and they will not hesitate to make decisions about how big cities they don't live in ought to be run.)

Meanwhile, a similar laws failed to pass in New York, Maryland, Florida, Illinois, Minnesota, Ohio, Pennsylvania, Rhode Island, Virginia, and Washington in the latest biennium.
Posted by Paul Berge at 7:58 AM No comments:

Digging into the water-damaged section of my ancient work, we find this cover illustration for the UW-Milwaukee Post from December, 1990: 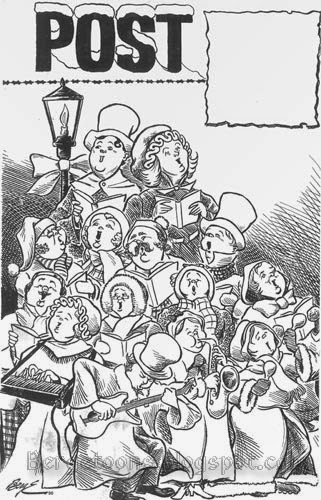 Posted by Paul Berge at 3:56 PM No comments:

In matters that have nothing to do with this week's cartoon, a small contingent from the Westboro Batshit Church has been picketing churches, schools and other sites in my neck of the woods yesterday and today. Their targets included the high school just two blocks from where I work; their picketing was planned for dismissal time, so the school let out two hours early.

I opted not to take part in the spectacle, although some people from work did take the time to counter protest the Westboro Clan in the chilly drizzle. (Beth A. Gilmore set up a Facebook page on the Racine counter-protesters' behalf; the Racine Journal Times's coverage of the Westborg and the counter-protests at St. Lucy's afternoon mass is here.)
Posted by Paul Berge at 5:00 PM No comments:

It's time for this year's Christmas themed cartoon!

I don't much like cartoons that are this wordy, especially when they're all packed into one panel. But that big, overstuffed text balloon did save me from having to research whether there should have been loge seats or balconies behind it.

And it does make my cartoon stand out when every other cartoon out today gets by with only three words.
Posted by Paul Berge at 6:33 AM No comments:

Does This Ring a Bell?

Due to technical difficulties (namely going through the entire day yesterday thinking I had already uploaded the file to the AAEC web site when I hadn't), this week's Q Syndicate cartoon will be delayed until tomorrow.

Yes, I could have dated the cartoon for release today when I uploaded it this morning, but I let the default date of Tomorrow slide. If you really can't wait, it's up on the Between the Lines and the Bay Area Reporter sites.

Otherwise, faithful reader, I promise to have the cartoon up with my own thoughts about it tomorrow; and in the meantime, here's an old Christmas Cheer cartoon from 2001. 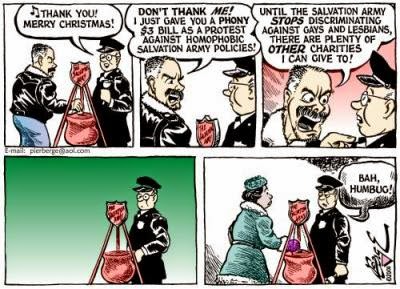 Posted by Paul Berge at 9:20 AM No comments:

This week's cartoon comes complete with a musical score.
Posted by Paul Berge at 8:33 AM No comments: