As a tribute to David Levine, here's "Unhealed Scar," a cartoon I drew 'way back in September, 1981 after his famous caricature of President Lyndon Baines Johnson:

Posted by Paul Berge at 5:25 PM No comments:

No animals were harmed in the drawing of this cartoon. 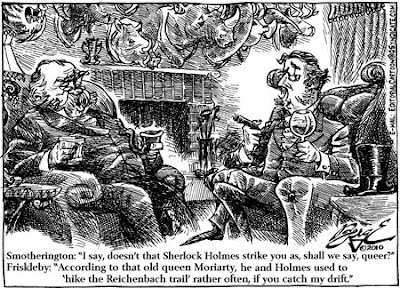 Posted by Paul Berge at 7:31 AM No comments:

Since the publications I draw for come out weekly, biweekly, or monthly, this week's Q Syndicate cartoon looks past Christmas and into the new year. 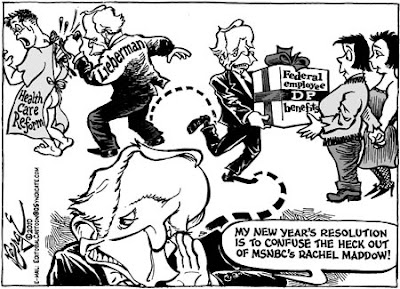 The good news is that Sen. Joe Lieberman (I-Lieberman) hasn't succeeded in killing Health Care Reform just yet; perhaps it would have been more appropriate to have drawn him kneecapping Health Care Reform. But we cartoonists are an impish lot, and will seize any opportunity to draw buttcrack.

The Ugandan "Death to Gays" Bill

American evangelists have been working hard with their counterparts in the central African nation of Uganda to create the sort of theocracy that pesky liberals in the United States won't let them establish here. Ugandan officials, faced with an AIDS crisis that, percentage-wise, dwarfs America's, are only too happy to scapegoat homosexuals.

Hence a proposed law that calls for life in prison for anyone found guilty of engaging in homosexual activity, and capital punishment for those who are HIV-positive. Anyone who fails to report gays and lesbians to the authorities would also face imprisonment. 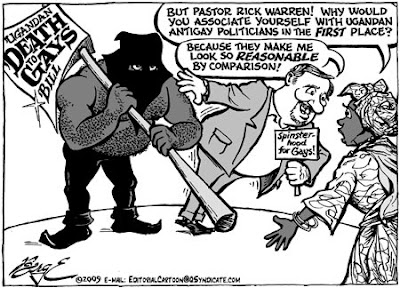 At first, Americans who have pushed their influence in Uganda, such as Pastor Rick Warren, Senator Chuck Grassley, "Ex-Gay Therapy" quacks, and others in the Governmental-Evangelical complex, were silent on the bill, or sloughed it off as Uganda's internal business. Under pressure, however, more of Uganda's friends are deciding that they can't reconcile "Love the sinner, hate the sin" with "Arbeit Macht Frei." Find more on this topic at Qweerty, the Rachel Maddow show, and other sites.

One word about this cartoon: As with any topic involving non-Caucasians, I had to be sensitive to perceptions of racism in drawing this cartoon -- in this case, especially because the Big Evil Bad Guy in the cartoon had to be black. It wouldn't have made any sense to make him white. In another time, most cartoons would have depicted him as a black-as-coal jungle savage, wielding shrunken heads instead of an axe.

My choice to dress him as a medieval European executioner was in part to avoid such a racist depiction, but also to convey the sense that he was acting in an official capacity, which wouldn't come across if he were a savage out of a 1940's movie or Charles Addams cartoon.

It also made sense to me for the "Joe Public" character at lower right also to be African. I also decided to make her a woman, which was a 50-50 consideration. My first efforts had her wearing a woolen headdress based on one worn by a woman in the very same issue of Time magazine with the pictures of Rick Warren I used for reference; but it was impossible to tell from the resulting sketches that I wasn't drawing her with wild hair. Thus the wrap she is wearing in the final product, modeled after one on a different woman from a different country in a different issue of Time. I beg your indulgence if it should happen that neither headdress is typical of Ugandan women.
Posted by Paul Berge at 11:51 AM No comments:

After an excessively long hiatus, I've finally contributed a local-issue cartoon to the Racine Post. The issue concerns the sweeteners Racine has offered to entice a small business, American Tire and Recycling, to open a plant in town.

The city would pay American Tire $39,600 to cover the company's rent at 2301 S. Memorial Drive for 18 months. In exchange, the company is committed to creating 88 jobs over 18 months, with city residents getting first shot at the jobs.

The company is committed to immediately hiring 33 low-skill workers and 20 truck drivers for the Racine site. It intends to ramp up to two shifts with a total of 88 workers over the next year and a half.

While the low-skill jobs may not pay great, O'Connell said, they're needed in Racine. The city has a large unskilled workforce that could use jobs that don't require degrees or advanced training. ...

The meeting started with O'Connell taking some heat from the committee for providing a written review of the agreement on Monday, the same day as the meeting.

'Is there any way this committee can be better informed?' Alderman Q.A. Shakoor II asked O'Connell.

O'Connell said he didn't have an excuse. 'It's the simple press of business,' O'Connell responded to Shakoor. 'I don't have a better reason.'

Originally, the caption had Mayor Dickert having promised that the city council would clear snow off AT&R's roof; then I decided that changing it to the neighbors would be more effective ... even though I'm fully aware that the 2300 block of South Memorial Drive is not really a residential area.
Posted by Paul Berge at 4:59 PM No comments:

After the New York state senate failed to pass marriage equality, I was faced with the problem of having to draw yet another cartoon on the topic... 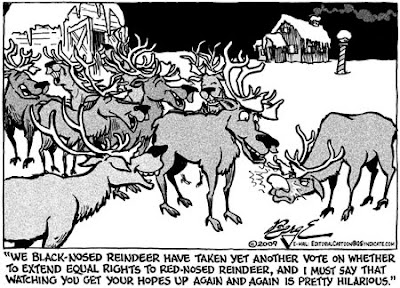 This week, we take time out from the national obsession with Afghanistan, financial collapse, Tiger Woods and the Salahis to address a truly important issue: did you see American Idol runner-up Adam Lambert on the American Music Awards? 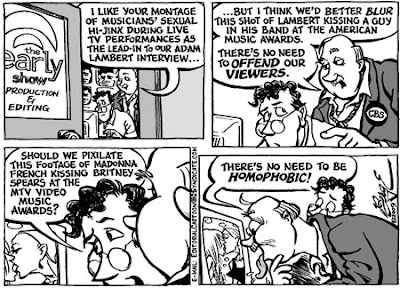 And if you didn't see it live, why are the powers that be at Dick Clark productions, CBS, etc., determined to make sure that you don't see it now?
Posted by Paul Berge at 7:51 AM No comments: