Arthur William Radford is chiefly remembered for saying "Half of art is knowing when to stop."

I reached that point and whizzed right past it when I made a last-minute decision late at night to draw a stained glass window in the background right where I had intended to put that notice about where to email me.
Posted by Paul Berge at 8:40 AM No comments:

Q Toon: A Night to Remember

Prom time is just about here, so I decided to take a break from the serious issues of the day this week.

I never actually went to prom when I was in high school, in spite of growing up in the town with the world's best prom. (That's how they bill it, really. Once upon a time, the Rotary Club brought in such superstars as Tommy Dorsey, Duke Ellington, Stan Kenton, and Buddy Rich to play at the city-wide after-prom party they sponsor to keep kids under supervision and out of each other's pants; but after-proms with those big-name performers were well before my salad days. The Rotary Club dance continues to this day, however, with live cable TV coverage of the kids arriving in their finery.)

The last school dance I went to was in the eighth grade, where I discovered how grossly inadequate was the dance instruction that had been part of elementary school P.E.

I believe our prom theme was "A Stairway to Heaven" (wasn't everybody's?), and I can only assume that what paltry do-si-do and allemand-left skills I might have retained would be no more useful there than they had been in the eighth grade.
Posted by Paul Berge at 12:54 PM No comments:

In the spring a young man's fancy lightly turns to thoughts of love; so away with all these thoughts of court cases, discriminatory wedding cakes, and antigay pogroms in foreign lands!

A dance to spring!
Posted by Paul Berge at 9:20 AM No comments:

It ain't easy defending Defense of Marriage Acts around the country these days.

State lawyers arguing in favor of Utah's ban of same-sex marriage had planned to cite that Mark Regnerus study so thoroughly dismissed by the U.S. District Court Judge Bernard Freeman in Michigan. Last week, Utah's lawyers wrote the 10th Circuit Court to ask them to forget anybody ever mentioned Mr. Regnerus. (See my cartoon about Mr. Regnerus here.)

Just days later, Southern Ohio District Court Judge Timothy Black ruled that Ohio must recognize marriages of same-sex couples legally performed in other states, stating that "The record before the Court ... is staggeringly devoid of any legitimate justification for the Ohio's ongoing arbitrary discrimination on the basis of sexual orientation, and, therefore, Ohio's marriage recognition bans are facially unconstitutional and unenforceable under any circumstances."

Further cases are pending in Oklahoma, Arkansas, Wisconsin, Virginia -- well, almost every state that still clings to mixed-sex marriage supremacy. And time is running out for those desperately searching for evidence out of marriage equality pioneers Massachusetts, California, and Iowa that marriage equality leads to juvenile delinquency, the heartbreak of psoriasis, uneven breast growth, crab grass, holy fucking shitballs, or rising sea levels.
Posted by Paul Berge at 7:58 AM No comments:

Three-point perspective makes its return in this week's cartoon, which doesn't really have anything in particular to do with Holy Week, or Passover, the Red Moon, Tax Time, or King Joffrey's wedding, as it turns out.

Pity poor Margaery, by the way. How many lousy husbands does a gal gotta marry just to become queen, anyway?
Posted by Paul Berge at 5:03 PM No comments:

Last Thursday, Mississippi Governor Phil Bryant signed a law similar to the one vetoed by Arizona Governor Jan Brewer last month guaranteeing a right to discriminate against anyone you think is a heathen, sinner, apostate, heretic, infidel, or -- oh, come on, you know it's all about Teh Gay.

Unlike Governor Brewer, Bryant isn't worried about losing Super Bowls or convention business to other states.


“I am proud to sign the Mississippi Religious Freedom Restoration Act, which will protect the individual religious freedom of Mississippians of all faiths from government interference,” Gov. Phil Bryant said in a statement.

Indeed, the Governor and the state legislature look forward to welcoming any number of wacko cults flocking to set up shop in the fertile soil of the Magnolia State.

Posted by Paul Berge at 7:38 AM No comments:

I was up until 1:00 last night wrestling with three-point perspective and drawing circles on an angle.

And it looks like this woman is digging her elbow into a cake.

Dammit.
Posted by Paul Berge at 8:49 PM No comments:

That's the Last Time I Send Money to a Nigerian Prince!

The new antigay laws in Uganda and Nigeria go beyond criminalizing homosexuals:


"The [Ugandan] law also makes it a crime to fail to report anyone who breaks the law, essentially ensuring that gays will need to live secret lives. The law even makes illegal the 'promotion' and 'recognition' of homosexual relations, including by any government entity or nongovernmental organization inside or outside Uganda. And for the first time, the law targets lesbians."

HIV/AIDS in Africa is not a disease confined to the gay community, but the disease is widely blamed on gays nevertheless. Since failure to report homosexuals to the authorities is now criminal, consider this from The Week's "Everything You Need to Know about Africa's Antigay Crackdown"


"Uganda was once an AIDS success story, but that is now changing. The portion of the population that identifies as gay is tiny, but there are many more men in Uganda — and across Africa — who have sex with other men but do not identify as gay or bisexual. These men, many of them married, are now less likely to be honest with health-care providers and less likely to get the education, free condoms, and HIV testing they need. They are also more likely to contract the virus and spread it to their female and male partners. In Senegal, after several HIV prevention workers were imprisoned in 2008, the number of men seeking sexual health services in that area dropped sharply."


"[John ]Adeniyi [a human rights program officer at the International Center for Advocacy on Rights to Health, an HIV intervention organization based in Abuja] estimates that since the law took effect in January, the number of patients coming into ICARH for HIV treatment has dropped by over 50 percent. 'One person told me he would rather die…than come to the organization' and risk imprisonment, he says. He adds that LGBT couples living with HIV may also be discouraged from going to the doctor for couples counseling, out of fear that the doctor may turn them over to the police.

"Eight organizations that provide HIV treatment and prevention services in northern Nigeria have cut back on HIV outreach, training, and education programs, according to Dorothy Aken'Ova, executive director of Nigeria's International Center for Reproductive Health and Sexual Rights (INCRESE). 'People thought, "You know what? I don't want to be in prison because I'm providing treatment for these gay homosexual people,"' Adeniyi says. He expects more organizations will drop their programs in the coming months."

Posted by Paul Berge at 7:52 AM No comments: 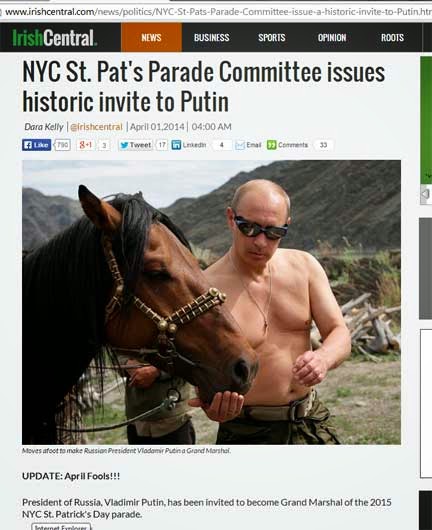 
"President of Russia, Vladimir Putin, has been invited to become Grand Marshal of the 2015 NYC St. Patrick's Day parade.
"According to a press release published on its homepage by parade committee, the committee has personally written to the Russian president to invite him to become the parade's Grand Marshal in 2015.
"The historic invite will silence longtime critics who say the parade is not inclusive, Dunleavy said. "A Russian citizen has never been selected to become Grand Marshal before, never mind an elected head of state," A spokesman explained. ...

"Reaction from LGBT groups, who have long been excluded from the parade, was swift.
"'The world should take note,' said Stephen Kennedy of GLAAD. 'This committee will literally go as far as the Kremlin to insult LGBT New Yorkers.'"

Where have I seen that idea before? Just sayin'.

What gets me, actually, are the commenters at both sites who seem to have been suckered by this story.
Posted by Paul Berge at 4:20 PM No comments: