There's not much of a theme to today's Scatterback Saturday post, other than to pick up on the threads of disparate conversations about recent cartoons, both mine and others'.

Sean Martin (cartoonist of Doc and Raider) confessed on a post earlier this week to being puzzled by the furor over the Portuguese cartoon that proved to be the final straw in the New York Times's decision never to run editorial cartoons again. Others can and have explained the issue better than I can; the argument boils down to the insistence that because of historic antisemitism, some images and criticisms that might be perfectly acceptable about any other country ought to be out of bounds if the topic is Israel.


This brings us to Howard Wasserman's recent post on PrawfsBlawg, in which he suggests that the cartoon of Netanyahu is no more offensive than would be a similar cartoon of Vladimir Putin leading a blind Trump. ... [T]he cartoon in question engaged an ancient anti-Jewish trope — the tricky Jew who secretly controls the government of unwitting Gentiles — which differentiated it from any similar cartoon about other world leaders. The Putin analogy would have meaning only if there had ever been such a thing as the Protocols of the Elders of the Kremlin. It does not take much effort to imagine images of other world leaders that would be readily acknowledged as racist or sexist, but would be okay if applied to Putin.

Imagine a cartoon of Putin-as-Dracula, sucking blood the people of Ukraine. That would be gory, but not racist. Now imagine a cartoon of Netanyahu doing the same thing. Is there any question that the image of a Jewish bloodsucker, preying on a Gentile body (during Passover, no less) would evoke classic anti-Semitism?

The question of what is permissible in visual criticisms of the Israeli state reminds me of a controversy that arose back when I was drawing for the UW-Milwaukee Post in the '80's. UW-Milwaukee has long had politically active Jewish and Palestinian student groups that were ever at odds.

In 1988, the General Union of Palestinian Students (GUPS) posted a large banner over the lobby of the student union, depicting a prone Palestinian child impaled in the back by a large blue Star of David. The pro-Zionist student group TAGAR protested that the banner was antisemitic and demanded it be taken down. GUPS's response was that the Star of David is the one identifiable emblem on the Israeli flag and thus represented the Israeli state rather than the Jewish religion.

It does both, of course. I waded toe-deep into the controversy with this cartoon:
Toward the end of my service at the Post, GUPS posted an intentionally offensive banner in response to a cartoon I'd drawn mourning the assassination of Prime Minister Yitzakh Rabin as a "martyr for peace." I think that TAGAR may have blown the cartoon up to banner size to hang in the union, but I'm not positive about that.
In any case, GUPS made a banner out of the cartoon, but added a military helmet and replaced "martyr" with "murderer." TAGAR, naturally, called for GUPS to remove its poster. I drew a reply of my own.
No doubt, the children and grandchildren of those GUPS and TAGAR students continue to antagonize each other from the rafters of the student union.

✍
Moving on to another topic entirely: a fan wrote me about my recent cartoon of Trump proposing a tariff against transgender people. The fan particularly liked the portrait of Warren G. Harding in the background and asked, "Is this a reference to the most corrupt Presidential Administration 'before Trump' and a recognition that the realization of the corruption came out after Harding had died which implies there is so much more to worry about with Trump."

Of course it was. And it isn't the first time I've hung Harding's portrait in the Oval Office. 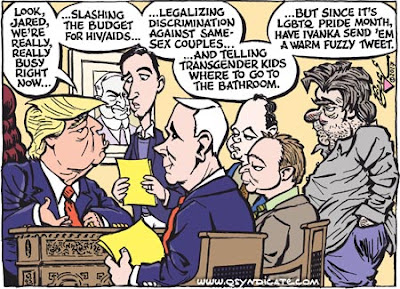 Presidents can hang portraits of Andrew Jackson or whatever dead president they like in the Oval Office; I will still feel free to choose a more appropriate wall hanging in my cartoons. I haven't picked out the decor for any of the 386 candidates seeking to unseat the Corrupt Trump Administration, however.
Not just yet.
Posted by Paul Berge at 3:48 AM