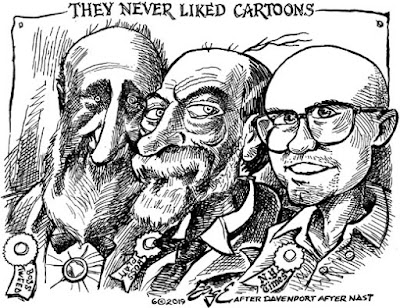 The Times is not alone in kicking its editorial cartoonists to the curb. Just last month, Gatehouse Media fired the Columbus Dispatch's Nate Beeler, Savannah Morning News's Mark Streeter, and Augusta Chronicle's Rick McKee. Once, we roamed the plains in great numbers, but now, there are only some two dozen full-time employed editorial cartoonists left.

In the first half of the 20th Century, the domestic edition of the Times had its own cartoonist in Edwin Marcus; from 2011 to 2016, the Sunday Times featured a cartoon by Brian McFadden after its editors decided to cancel a weekly round-up of four or five cartoons by syndicated editorial cartoonists.

Otherwise, the Old Grey Lady eschewed cartoons. No comics page. No editorial cartoons. The editors clearly didn't understand them, didn't respect them, and didn't like them.

Meanwhile, Chappatte's cartoons, in the international edition since 2001, won the Overseas Press Club of America’s Thomas Nast Award for best cartoons on international affairs in 2011, 2015 and 2019. But then, this past April, some anonymous editor decided to run a cartoon by a Portuguese cartoonist that depicted a blind, yarmulke-wearing Donald Trump being led by a guide dachshund with Bibi Netanyahu's face and a Star of David dangling from its collar. Many were offended by the cartoon, and the Times apologized for printing it.

So now the Times is citing that Portuguese cartoon as the reason why it will never print editorial cartoons again. (As Canadian journalist Jeet Heer tweeted, "NY Times prints one awful cartoon & now decides to stop running cartoons. By this logic, the paper should have shut down after its 2002-2003 WMD reporting.") American editorial cartoonists, still smarting over the cancelling of the Sunday round-up, are up in arms.

My above cartoon is based on a cartoon by the great Homer Davenport, which I have variously seen with the caption "No Honest Men Need Fear Cartoons" and "They Never Liked Cartoons." The former is probably more authentic, but the latter speaks to the editorial attitude of the New York Times. 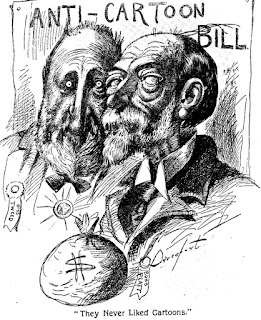 For anyone who needs the refresher course, here's a quick explanation of Davenport's cartoon. On the left is New York City's Democratic Commissioner of Public Works William M. "Boss" Tweed, whose corrupt dealings in the 1870's were the subject of a great deal of investigative reporting, and the cartoons in Harper's Weekly of Thomas Nast. Tweed remarked that "I don't care so much what the papers say about me. My constituents don't know how to read, but they can't help seeing them damned pictures!"

Tried and convicted for stealing untold millions from the public coffers, he fled to Spain, but people recognized him because of Nast's cartoons. He was returned to the U.S. and died in jail a couple years later.

The other guy in Davenport's cartoon is Thomas Platt, the Republican leader of the New York State Senate in the 1890's. Upset by Davenport's cartoons in William Randolph Hearst's New York Journal, Platt had back-bencher Timothy Ellsworth put forth a bill in 1897 to prohibit publication of a person’s portrait or caricature without his/her consent, with penalties of up to $1,000 in fines and a year in prison. The Ellsworth Anti-Cartoon Bill passed in the State Senate, but died without a vote in the House. 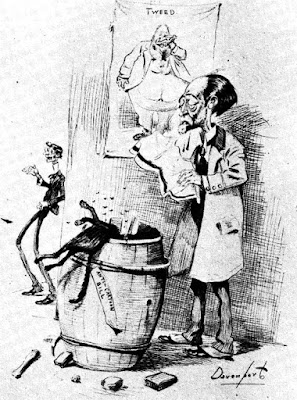 Finally, the guy on the right in my cartoon is current New York Times publisher A.G. Sulzberger. I suppose I could have put any of the Times editors in his place, or, better still, an Old Grey Lady.

As much of a cliché as the newspaper's nickname may be, I don't think I've ever seen an actual depiction of what that Old Grey Lady is supposed to look like. That includes this week's flurry of cartoons by my fellow ink-stained wretches.*

Call it a lost opportunity to personify the Times.