Crazy Eyes Cryin' in the Rain 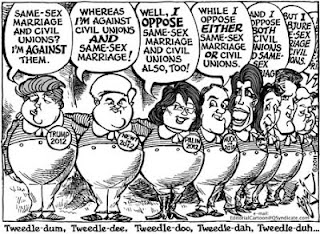 With Michele Bachmann's announcement yesterday that she would not run for reelection to Congress in 2014, America loses one of its most colorful and loony legislators. She announced her retirement on YouTube -- looking straight into the camera this time -- speaking over a looping recording of a simulated orchestra and choir.

Wouldn't you like to have a soundtrack to your life?

My only cartoons of Ms. Bachmann were drawn during her flash-in-the-pan run for the 2012 GOP presidential nomination. In the first (above right), I relied too heavily on the model set by Minneapolis Star Tribune cartoonist Steve Sack, who draws her with a tall, thin, figure-8 face. It works for him, but did not work for me. (See Sack's brilliant retrospective of Bachmann's career at the Strib's site, here.) 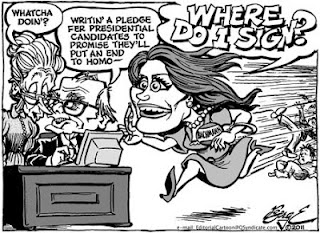 I was much more pleased with the cartoon at left, drawn a month or so later. In the first place, she appears larger and not crowded in by a row of other caricatures. Upon further review, I found her face more rectangular than Steve Sack does. By completely disregarding proportionality, I was able to convey her "Crazy Eyes" by drawing the irises so that they extend out beyond the confines of the rest of the eye.

I made sure to include this cartoon on my drawing board for my Facebook page cover photo. 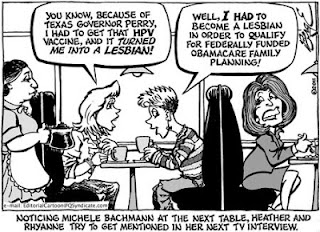 My last Bachmann cartoon was prompted by her claim on the Today Show that someone told her that the vaccine against human papillomavirus causes mental retardation: "I had a mother last night come up to me here in Tampa, Florida, after the [previous night's Republican presidential] debate. She told me that her little daughter took that vaccine, that injection, and she suffered from mental retardation thereafter. It can have very dangerous side effects. … This is the very real concern, and people have to draw their own conclusions."

The medical and pharmaceutical community loudly protested that there was no connection between the HPV vaccine and mental retardation, so I suggested that Bachmann could find some other side effect closer to her heart.

Senator Patrick Leahy (D-VT) last week introduced an amendment to the immigration reform bill which would recognize the relationships between American and non-American same-sex couples. While marriage to Mark Sanford would automatically make his Argentinian girlfriend eligible for U.S. citizenship, the same is not now afforded to the foreign nationals who marry a person of the same sex in any of the twelve states where such marriages are recognized. 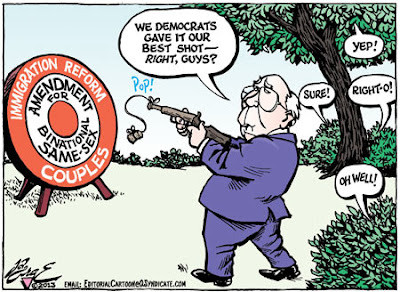 Republicans -- notably closet case Lindsey Graham (R-SC) -- quickly announced that they couldn't support the bill with the Leahy amendment in it, and erstwhile Democratic LGBT allies from Diane Feinstein to Al Franken to Chuck Schumer immediately signaled that they wouldn't support the amendment, either. With President Obama reportedly also urging him to drop the issue, Senator Leahy withdrew his amendment.


“It’s hard for me to look at two couples in Vermont, both legally married, [and] say to one, ‘We can help you with your immigration problems,’ but to the other one, ‘Sorry, the law requires us to discriminate against you.’ But the Republicans made very clear that they would defeat the whole immigration bill if that amendment was in there,” Leahy said.

Republican opposition to LGBT couples is hardly surprising -- breaking up our families is a longstanding priority of their party -- but the utter lack of any support from Leahy's fellow Democrats is more than disappointing:


Steve Rawls, spokesman for Immigration Equality, a Washington-based group that has been pushing the issue, had high praise for Leahy on Friday, but the opposite for other Democrats.
“We expected Republican opposition, but we also expected other Democrats to stand with Senator Leahy and pledge their support for our families,” Rawls said. “And the fact they didn’t was just disgraceful.”

I don't often have occasion to draw cartoons critical of Democrats these days, the alternative to them being so thoroughly, horrifically offensive. So make a note of this week's cartoon. I am unlikely to draw many more like it.
Posted by Paul Berge at 10:25 AM No comments:

Between taking a ten-day vacation and then spending a couple weeks catching up on stuff that didn't get taken care of during that vacation, I'm afraid I've neglected this little blog this month.

Be sure to remember the sacrifices made by our men and women in the service of our country today. I'll be back Wednesday.
Posted by Paul Berge at 9:19 AM No comments: 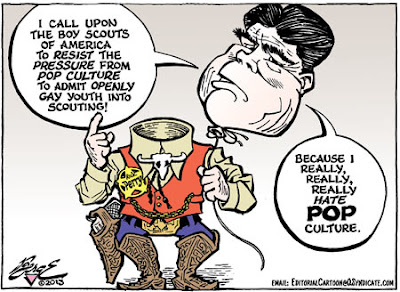 I'm catching up on a little news item that came across the wires during my vacation earlier this month. Speaking of the decision due this Thursday from the Boy Scouts of America (BSA), Texas Governor Rick Perry compared rejecting LGBT youth to not seceding from the Union during an appearance on the American Family Association program "Stand With Scouts Sunday" on May 4.

(Most reports have Perry likening support of the BSA's current antigay policy to fighting slavery, when in fact he is only citing Governor Sam Houston's declaration that slavery was not worth leaving the Union over. As Rev. Ellen Cooper-Davis noted in the Houston Chronicle, Houston himself owned slaves. Houston favored neither abolitionists nor secessionists, foreseeing that his beloved South would end up losing the Civil War.)

What caught my ear were Perry's comments on what he called "pop culture":


“[The BSA] values and principles have worked for a century now. And for pop culture to come in and try to tear that up, which happens to be the flavor of the month so to speak, and to tear apart one of the great organizations that has served millions of young men, helped them become men and become great fathers, that is just not appropriate and frankly I hope the American people will stand up and say, ‘Not on my watch.’ ...
“And if we change and become more like pop culture, young men will be not as well served. America will not be as well served, and Boy Scouts will start on a decline that I don’t think will serve this country well as we go into the future.”

It would be easy to dig up examples of politicians from the Houston's day who publicly proclaimed that America would not be well served and would start on a decline were slavery to be abolished. And while Houston's contemporaries were not familiar with the phrases "pop culture" and "flavor of the month," some would have happily dismissed slavery's opponents in similar terms.

Editorial cartoonists and Governor Perry have been at odds lately over his attack on Sacramento Bee cartoonist Jack Ohman, so I'll confess that I welcomed the opportunity to lampoon the Texas governor. But I'm not a totally unfair person. I resisted the temptation to have Perry struggle to remember that third "really."
Posted by Paul Berge at 10:30 AM No comments:

This image can only mean three things:

Posted by Paul Berge at 2:05 PM No comments: 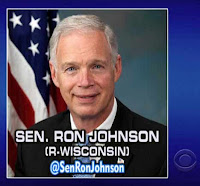 Wisconsin legislators got some exposure on the late-night TV shows last night. It was finally Senator Ron Johnson's turn to be David Letterman's "Stooge of the Night," (at 13:12 here) and Congressman Gwen Moore from Milwaukee's Fightin' Fourth was featured in Steven Colbert's "Better Know a District" segment.

Rep. Moore held her own against Colbert's needling -- although I'm pretty sure she could have come up with something impolitic to say about Governor Snotwalker if she had had a mind to.

Posted by Paul Berge at 1:03 PM No comments:

Q Toon: Back After This Word

I was away on vacation last week, attending a family wedding and meandering back home through Tennessee and Kentucky. (What do you call that? The Shallow South?) This meant I was paying less attention to the news than usual; when we watched TV, we were watching entertainment programs that were unlikely to help me come up with any ideas for this week's cartoon.

But we certainly took notice of this commercial for Norelco, in which a hirsute fellow uses the company's trimming products to get rid of his beard and chest hair, and even trim his pubes, judging himself more attractive to himself at each step of the way. The professional umbrage-taking group "One Million Moms" also took notice:


"The ad shouldn't run at any time. It is not only inappropriate for children; it is offensive to adults also. The company's response to people's concerns is in poor taste. They are basically saying that they don't care, and they are going to run the commercial anyway."


OMM urged their followers to register their objections on Norelco's Facebook page, or to call the company on the telephone:


"Call Philips Norelco at: 1-800-243-3050 or 1-888-744-5477. Please remember to be polite. Here is a sample script: 'The new Norelco manscaping and grooming commercial is extremely offensive in many ways. Please do what you can to get it pulled off the air, or I certainly won't be buying anymore Philips Norelco products.'"

I guess we can't look forward to any similar ads for Lady Norelco products.
Posted by Paul Berge at 7:57 AM No comments:

This week's cartoon is brought to you by the people whose slogan when I was but an impressionable lad was "Take it off. Take it all off."

Oops, sorry. That was Noxzema. Darn.
Posted by Paul Berge at 7:36 AM No comments:

This week's cartoon was drawn a couple weeks ago in anticipation of my not being able to draw a cartoon this week. The inspiration comes from a talking point being repeated within the right-wing echo chamber, asking us gays and lesbians to respect their opposition to marriage equality because it took a while for President Obama to evolve to our point of view. 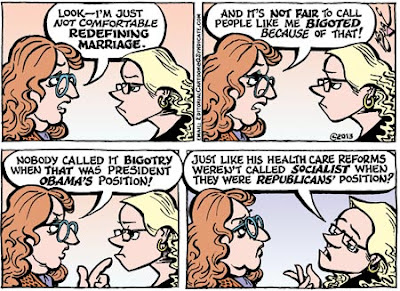 I can respect their opposition to marriage equality -- at least as far as I can respect the right of Catholic churches to refuse to marry divorcees or people who can't come up with a baptismal certificate. As far as I know, those policies have yet to affect any faith-based community assistance program's state or federal aid. I never fully supported the rights of 14-year-old first cousins to marry, but I never went so far as to devote millions of dollars to pass constitutional amendments around the country to make sure they all had to go to Alabama to get hitched.

As it happens, Delaware became the eleventh state to pass marriage equality into law this week, and similar laws are moving forward in Minnesota and Illinois. So hooray for evolution!
Posted by Paul Berge at 6:37 PM No comments:

I'm still kind of ticked that I had this week's cartoon all drawn, scanned, and sent to my editors, and then Jason Collins announces he's gay. The story was all over the internet; it led the CBS Nightly News and CBS This Morning; and even President Obama had something to say about it.

And family obligations will be keeping me away from my drawing board for another week. 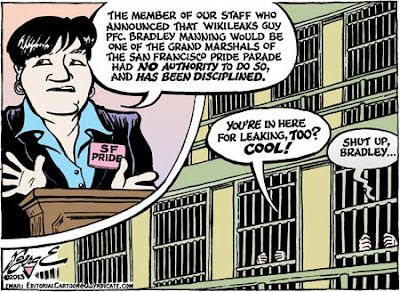 So anyway, the San Francisco Pride Board -- or somebody on it -- announced that Pfc. Bradley Manning would be one of the 40 or 50 parade marshals this year. Manning, you may recall, is the gay soldier currently in Leavenworth, on trial accused of leaking sensitive military documents regarding the Iraq War to Wikileaks.

Gay service organizations and others hit the roof over such an honor being given to an accused traitor to his country and his fellow service men and women. The Pride Board quickly caved. Board president Lisa Williams blamed the announcement on an unnamed staff member.


"It was a mistake," Williams said in the statement, "and should never have been allowed to happen."

Now it's the antiwar liberals' turn to be upset, and, it being San Francisco, they are.

The thing is, the probable reason that San Francisco Pride has so many damn Grand Marshals is to keep everybody happy.
Posted by Paul Berge at 6:56 AM No comments: