"I have long advocated that we repeal ‘Don’t Ask Don’t Tell’, and I am pleased that both the House of Representatives and the Senate Armed Services Committee took important bipartisan steps toward repeal tonight. Key to successful repeal will be the ongoing Defense Department review, and as such I am grateful that the amendments offered by Representative Patrick Murphy and Senators Joseph Lieberman and Carl Levin that passed today will ensure that the Department of Defense can complete that comprehensive review that will allow our military and their families the opportunity to inform and shape the implementation process. Our military is made up of the best and bravest men and women in our nation, and my greatest honor is leading them as Commander-in-Chief. This legislation will help make our Armed Forces even stronger and more inclusive by allowing gay and lesbian soldiers to serve honestly and with integrity."

The full defense appropriation bill still needs to be approved by both houses of Congress; right-wing lap dog John McCain is threatening a filibuster. 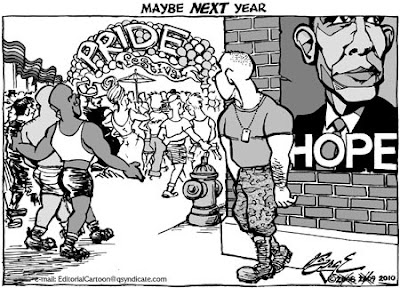 When I drew this cartoon last Sunday, my chief reservation was that its point really isn't whether U.S. Servicemen and women are free to attend gay pride events. (That service men and women are fighting in wars halfway around the world is a much more significant issue.) I used a gay pride event in the cartoon because they happen annually and would thus point out the passage of time during the Obama administration during which no perceptible movement has been made to end a "Don't Ask, Don't Tell" policy requiring gays and lesbians in the military to lie about themselves or risk discharge from the service.

Drawing a cartoon lamenting political inaction on Sunday when no reader will see it until at least Thursday risks the possibility that there will be political action in the meantime. That may be the case here. On Monday, House Speaker Pelosi's office announced that a deal had been struck on a bill to remove the current legal requirements that "Don't Ask, Don't Tell" continue. In Wednesday, President Obama answered a heckler by reiterating his commitment to ending the policy.

The legislation wouldn't actually put an end to the policy, but it would clear the way for the President and the Pentagon to do so if and when they see fit. We know that there is still resistance to change in the policy among Pentagon brass, however -- and, for that matter, on both sides of the aisle in Congress. The legislation is not a sure thing, and its effectiveness if passed could still be a long way off.

From that standpoint, the cartoon remains a propos: Maybe Next Year.

Meanwhile, if you do happen to see any active duty personnel enjoying your local gay pride festival, please thank them for their service to this country. And don't post their pictures on Facebook.
Posted by Paul Berge at 5:46 PM No comments: 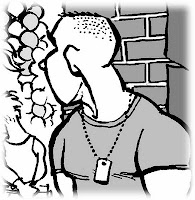 After seventeen years, is there possibly anything new to draw about the military's Don't Ask, Don't Tell policy?

Probably not, but here goes, anyway.
Posted by Paul Berge at 7:20 AM No comments: 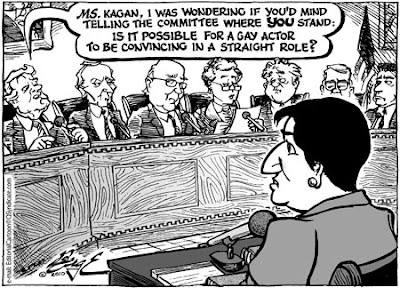 There is a phenomenon in editorial cartooning known as "Newsweekification," refering to cartoons which seem to have been drawn with the goal of getting printed on Newsweek's Periscope page. Newsweekified cartoons generally are about a widely discussed topic and are more focussed on setting up and delivering a gag rather than making a serious point.

My cartoon this week takes Newsweekification one step further by referencing an actual Newsweek column — from the on-line version of the magazine at least — by Ramin Setoodeh. Setoodeh, who is himself gay, wrote that he found Sean Hayes performance in the Broadway production of "Promises, Promises"


"wooden and insincere, like he's trying to hide something, which of course he is. Even the play's most hilarious scene, when Chuck tries to pick up a drunk woman at a bar, devolves into unintentional camp. Is it funny because of all the '60s-era one-liners, or because the woman is so drunk (and clueless) that she agrees to go home with a guy we all know is gay?"

Setoodeh proceeds from there to generalize that all out gay actors are unconvincing playing straight romantic leads, essentially because the audience knows the actor can't possibly have any romantic interest in the actress playing his romantic interest. Broadway and Hollywood have responded by denouncing Setoodeh as a self-hating homophobe; for an summary of the flap, see The Week.

Setoodeh does have a point that audiences seem to resist accepting openly gay actors in straight roles. Nathan Lane had a short-lived sitcom in the '90's whose short life may have had something to do with viewers not identifying with his skirt-chasing character, for example. Who knows how many times excellent gay actors have lost leading roles to mediocre straight actors because casting directors decided that the audiences wouldn't accept the gay actor in the role?

Heterosexual audiences seem much more inclined to accept openly heterosexual actors playing gay -- Robin Williams in "Birdcage"; Wesley Snipes, Patrick Swayze, and John Leguizamo in "To Wong Foo"; Jake Gyllenhaal and Heath Ledger in "Brokeback Mountain" -- perhaps because the heterosexual viewer has no vicarious interest in getting sexually involved with the character. Maybe a heterosexual audience mounts defenses against gay actors playing straight romantic leads because they expect the relationship to end in betrayal sooner or later. Certainly the straight audience has less emotional interest in a gay character's love interest than they do in that of a straight character, and therefore a lower standard of what they are willing to accept as believable portrayal of a gay character.

It's an interesting facet of a larger question, really. It fits alongside the controversy over whether white actors can play non-white characters — even whether it's ethical for a non-handicapped actor to play a handicapped character.

Can Laurence Fishburne play Big Daddy in "Cat on a Hot Tin Roof"? Could Jackie Mason pull off the role of Thomas More in "A Man for All Seasons"? Would audiences accept Aziz Ansari as Tony in "West Side Story"? Or would they rather watch Hayden Christensen as Othello?
Posted by Paul Berge at 7:36 AM No comments: 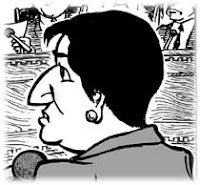 This week's cartoon confronts the important, vital, pressing issues of judicial temperament, strictness of constructionism, and the role of the federal government as we deal with powerful corporations, stateless terrorism, and erosion of privacy. Then it chickens out and heads for the ephemera in the wings.
Posted by Paul Berge at 8:20 AM No comments: 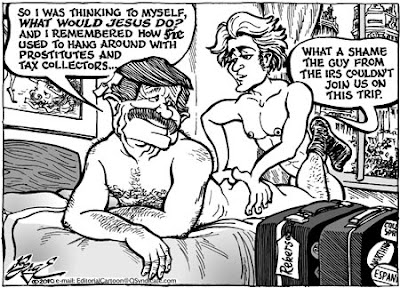 Dr. George A. Rekers, a co-founder of the Focus on the Family institute and a longtime antigay activist for the National Association for Research & Therapy of Homosexuality (NAMBLA) was caught coming home from a European vacation with a young man he found on rentboy.com, a gay sex hook-up site.


"I had surgery and I can't lift luggage. That's why I hired him."

—Rekers, to Miami New Times, which broke the story.

Apparently the qualities Rekers was looking for in a baggage handler were someone with a "smooth, sweet, tight ass" and "perfectly built 8 inch cock (uncut)" who was "sensual," "wild," and "up for anything"; at least that's how Jo-Vanni described himself on his rentboy.com profile. Jo-Vanni says that in addition to carrying Reker's luggage, he also gave the 62-year-old nude massages, but there was no "sex."

Rekers recently testified before the Florida legislature against adoption rights to same-sex couples at the request of state Attorney General Bill McCollum, and has been speaking out condemning gays and lesbians since the 1970's.

But what takes the cake this week is Rekers' explanation that he was actually following Jesus' example by ministering to sinners — you know, prostitutes, tax collectors. But it's so difficult to find an IRS agent willing to lug your bags around Europe.
Posted by Paul Berge at 7:43 AM No comments:

Sneak peek for the week

This week's cartoon was drawn last weekend, so it has nothing to do with the latest Supreme Court nomination. It deals with a story that had its fifteen minutes of fame last week. The story should still be in the news as far as the weeklies and biweeklies for which I draw are concerned, however.
Posted by Paul Berge at 10:46 PM No comments:

Here's a local issue cartoon I drew for The Racine Post today. There's a story on the site reporting that the new recycling bins delivered to Racine residents this month have computer chips in them to monitor the sort of use they're getting. Racine being a place where people who don't like any kind of change are quite willing to speak up about it, the bins had already stirred up a hornets' nest even before folks found out that the bins were monitoring their garbage for the gummint.

If the cartoon looks a little different from my usual style, it's because it was drawn primarily with felt marker instead of quill pen. I had hoped that a new pen would still have a sharp enough edge to enable some degree of detail; unfortunately, for that I had to resort to ballpoint pen -- a medium I gave up decades ago on the very wise advice of Bill Sanders, then cartoonist for The Milwaukee Journal.

I have been having a hard time finding the kind of india ink I like these days. I was happy with Winsor & Newton, but the local art stores now only sell it in the packs of multicolor inks; and you may have noticed that I don't use colored ink. I tried Speedball Super Black next, and it was okay... but it has also gone missing at the local art stores. I am very disappointed with Dr. Ph. Martin's Black Star, which is, as far as I'm concerned, gray. It's darker than #2 pencil, but not by enough for my tastes.
Posted by Paul Berge at 10:23 PM No comments: 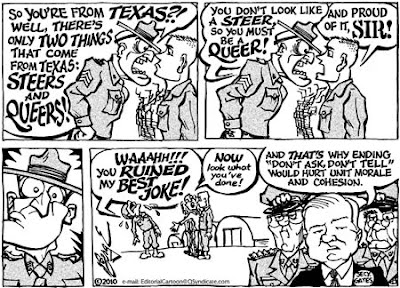 Defense Secretary William Gates has told Congress not to get ahead of the military when it comes to replacing "Don't Ask, Don't Tell" with a policy that would allow gay and lesbian soldiers to serve their country honestly and forthrightly.

These things have to be meticulously planned.

If the Pentagon had handled its planning of the wars in Afghanistan and Iraq the way it is handling dismantling "Don't Ask, Don't Tell," the Taliban and Saddam Hussein would still be comfortably in power.
Posted by Paul Berge at 7:43 AM No comments:

Not to pick on Texas, but there'd be far too many letters involved if Private Partz hailed from Wisconsin, whence only two things come: beers and queers.
Posted by Paul Berge at 8:20 AM No comments: