With apologies to Billy Mays, David Carradine, and whatever celebrity should happen to pass away this afternoon: 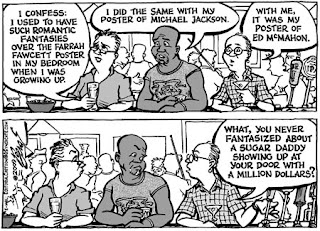 One of the poorly kept secrets of editorial cartooning is that eulogy cartoons are some of the most popular things we draw, but most cartoonists despise them. In our heart of hearts, of course, we cartoonists all hope to draw the cartoon that outlasts us, like Bill Mauldin's famous cartoon of the Lincoln Memorial weeping after the assassination of John Kennedy.

But since Bill Mauldin already used that idea, cartoons of (fill in the blank) crying all seem derivative. Countless cartoonists drew the Statue of Liberty crying on 9/11. Off the top of my head, I remember seeing cartoons of Alice Kramden crying when Jackie Gleason died, the Virginia Tech mascot crying after the shootings on that campus, the NBC peacock crying after Johnny Carson died, and who could forget the weeping guitars when George Harrison passed away?

The other cliche is the cartoon showing the deceased person's arrival at the pearly gates, where St. Peter says something moderately clever. I've drawn one or two of those myself. Alternatively, cartoonists take the liberty of welcoming a disliked deceased person to hell, where, if he or she isn't greeted by the devil himself, he/she is in the company of Hitler or Stalin. (I can't think of any actual Welcome To Hell cartoon about a woman, but I'm sure Mike Lester has one all ready for Hillary Clinton someday.)

Of my own eulogy cartoons, my favorite was for Quentin Crisp. I didn't think he'd have appreciated being in a eulogy cartoon, so that's what I drew.

Posted by Paul Berge at 6:55 AM No comments: 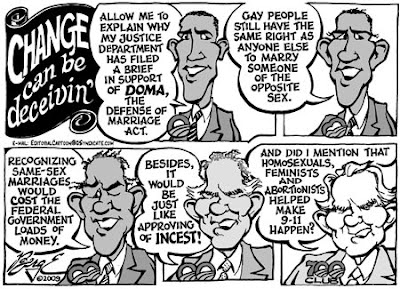 Given the Obama administration's reluctance to take action on LGBT issues of any significance, I probably should have submitted this cartoon to Q Syndicate as a reserve for release when I go on vacation this fall, but I seriously needed to draw a cartoon about any topic other than marriage rights.

With any luck there will be a gay angle to some other story in the news this week. The Mark Sanford walk in the wilderness, perhaps?
Posted by Paul Berge at 7:42 AM No comments:

Since I didn't draw a Gay Pride cartoon this year, here's one from 1998.

Posted by Paul Berge at 2:02 PM No comments:

I drew the above cartoon in May of 2008, as the presidential candidates responded to the California Supreme Court's Marriages decision recognizing a constitutional right to marriage equality in that state. Both Hillary Clinton and Barack Obama seemed taken off guard by the decision, issuing awkward statements that acknowledged the decision without much if any sense of congratulation to LGBT voters.
The Clinton campaign, however, did recover its footing enough to send daughter Chelsea to LGBT events to campaign for our votes. I certainly never got the impression at any point in the campaign that Obama was a "fierce advocate" for LGBT rights, even though he claimed to be. He was pressed on LGBT issues at a number of fora and debates, and always seemed to come up with parsed, legalistic answers on marriage rights — supporting "civil unions" rather than "marriages" for us (as did every Democratic candidate other than Dennis Kucinich and Mike Gravel).
That didn't prevent me from voting for Obama, either in the Wisconsin primary or the general election. Much as I would have liked to imagine that he would be stronger on LGBT issues than his campaign persona ought to have led anyone to believe, I supported him on other issues and thought he would be more electable in November than Hillary Clinton.
This is not to say that the administration's brief on DOMA this month is anything other than greatly disappointing. The May, 2008 cartoon, and the one out this week (below) were both drawn more in sorrow than in anger; but the ratio is closer to 50-50 this week.
Posted by Paul Berge at 2:52 PM No comments:

The Obama Justice Department last week filed a brief supporting the 1996 Defense of Marriage Act, using arguments that were guaranteed to incense the LGBT community. Administration lackeys have since claimed that the DOJ was obligated to file the brief — which is debateable — but this brief went out of its way to include some execrable arguments.
Posted by Paul Berge at 7:45 AM No comments:

The Democratic primary to succeed Rep. Ellen Tauscher in Congress includes an encouraging candidate, Anthony Woods, an Iraq veteran discharged because of Don't Ask, Don't Tell. This CNN video skips over Ms. Brown's questions, which is a little odd:

Here is a link to his web page.
Posted by Paul Berge at 2:23 PM No comments:

At senate hearings on the Uniting American Families Act bill, Alabama Republican Jefferson Sessions was reported responding to the tears of a 12-year-old, one of whose mothers faces deportation to her native Philippines, by muttering "Enough with the histrionics!" 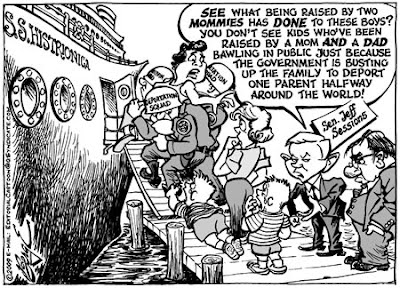 Different-sex couples, of course, do not run the risk of one parent being deported when his or her visa runs out; they can get married. Same-sex couples, even those living in states which recognize same-sex marriage, do not.
Posted by Paul Berge at 9:10 AM 1 comment:

This week's cartoon (check back Wednesday for it) is about a pretty obscure news story, reported by James Kirchik on The New Republic's blog pages.

Yesterday, the Senate Judiciary Committe held the first-ever hearing on the Uniting American Families Act, which would equalize the status of foreign-born same-sex partners of American citizens. Heterosexual Americans can earn citizenship for their foreign partners by marrying them. Gays, obviously, cannot do that, effectively making a gay American and his or her foreign spouse legal strangers.

Testifying was Shirley Tan, a Fillipino woman who has been with her American partner for 23 years. Together, they are raising twelve-year-old twin boys. She originally left the Phillipines after suffering a violent attack from a man who murdered her mother and sister (one of the reasons why Tan does not want to return to her native country, aside from the fact that her partner and children live in the U.S., is that the man who brutalized her has since been released from prison.) Tan was originally scheduled to be deported on April 3rd, but won a reprieve after Senator Diane Feinstein introduced a private bill allowing her to stay in the country temporarily.

...[O]ne of Tan's children started crying within seconds of the start of her testimony. At the sight of this, Judiciary Chairman Pat Leahy stopped the hearing and asked Tan if her son might want to sit in another room, where presumably a Senate staffer would console him for the duration of what was clearly an emotionally fraught experience. For most people, the sight of a 12-year-old boy in tears at the prospect of his mother being deported halfway around the world would invoke some sympathy. Unmoved, however, was Alabama Republican Jeff Sessions, ranking minority member of the Committee and the only Republican to bother to attend the hearing. At the sight of the weeping boy, according to a Senate staffer who was at the hearing, Sessions leaned towards one of his aides and sighed, "Enough with the histrionics." Sessions's press secretary did not return a call seeking comment.

One can explain these stories on a blog (quoting entire paragraphs, for that matter), but that doesn't work in a cartoon -- unless, like Tom Tomorrow, you have no qualms about having smaller print in your cartoon than the legal disclaimers in the medical and insurance advertisements. It's impossible to be pithy; I'd like to have Sessions saying just "Enough with the histrionics" in it, but I need someone in the cartoon to explain why boys are crying, what Sessions has to do with them, what's going on, even who's who. So much for brevity, the soul of wit!

I'm therefore not very satisfied with this week's oeuvre. I'm also hoping that I can come up with a cartoon very soon that is NOT about marriage equality.
Posted by Paul Berge at 6:58 PM No comments:

Mikhaela Reid drew a wonderful cartoon after seeing news coverage of a wedding held at an anti-marriage rights protest in Washington D.C.

One can only hope that the couple raises four lovely LGBT children who grow up to be in equally mortifying wedding photos of their own.
Posted by Paul Berge at 9:32 AM No comments: 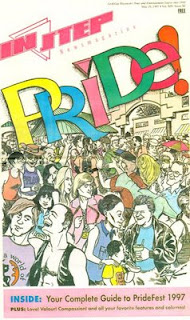 This is a cover drawing i did for In Step magazine in 1997 -- back when Milwaukee had two competing LGBT news publications. Since then, In Step, Wisconsin Light, and, last December, the four-year-old Queer Life News have all folded.

On the other hand, since I first started attending them, Milwaukee Pride Fest has moved to the Summerfest grounds as its first summer festival. (It was moved to August one year to make way for Harley Davidson's centennial celebration, but I don't think many people minded the move; after the cold weather of the previous years, fest goers appreciated being able to leave their parkas at home.) 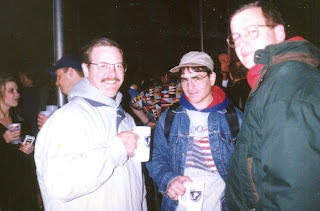 Posted by Paul Berge at 7:22 AM No comments: 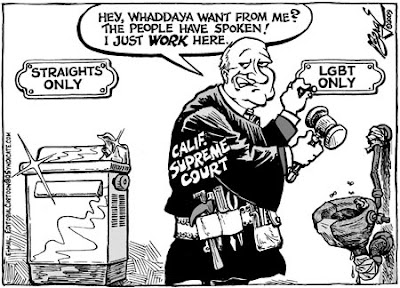 Last Tuesday's California Supreme Court decision upholding Proposition 8, denying marriage rights to all but 18,000 gay and lesbian couples, came at a lousy time relative to my deadline for last week. While the ruling came as no surprise to anybody, there was always the possibility that the ruling would not come down exactly as expected. Last week's cartoon was therefore not on the most salient topic of the week (and was one I'd rather have had Q Syndicate hold as a "reserve" for a week I'm away on vacation).

So here is my belated take on the case. As background, contrast Chief Justice Ronald George's opinion in 2009: