Q Toon: Judge for Yourself 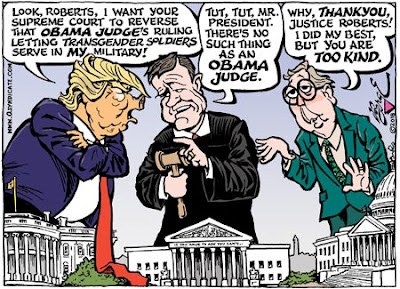 In among all the stuff in the Corrupt Trump Administration's news dump over the extended Thanksgiving weekend was a request to the Supreme Court to overrule a lower court injunction against Trump's executive order banning transgender service members in the U.S. military.

The move would bypass federal appeals courts, which is highly unusual but not absolutely unheard of in the case of a national emergency. If preventing transgender patriots from serving their country sounds to you like something that calls for the combined forces of Agent Bauer, the Impossible Missions Force, and the DC Comics line-up, Mr. Trump has an opening in the Justice Department for you.

Even more highly unusual was the response by Supreme Court Chief Justice John Roberts to Trump's complaining about another lower court ruling (this time on his draconian asylum policy) because it was delivered by an "Obama judge."


"We do not have Obama judges or Trump judges, Bush judges or Clinton judges," Roberts said in a statement. "What we have is an extraordinary group of dedicated judges doing their level best to do equal right to those appearing before them."
"That independent judiciary is something we should all be thankful for."

This direct rebuke of a president goes well beyond anything we have witnessed before. Justice Alito silently mouthed "not true" during a paragraph about campaign financing reform in one of President Obama's State of the Union addresses; but you didn't see him issuing an official statement defending corporations' and foreign entities' right to bankroll our elections. Unless you count his having signed on to the Citizens United majority opinion.

For the purposes of this week's cartoon, I'm conflating the transgender service member and immigrant asylum cases. Judge Colleen Kollar-Kotelly, who blocked Trump's anti-trans policy, was appointed to  the United States District Court for the District of Columbia  in 1997 by Bill Clinton, not by Barack Obama.

Well, it's not as if Mr. Trump is a stickler for factual accuracy.

I might also point out that the humans and buildings in this cartoon are not drawn to scale, in case anyone was wondering.
Posted by Paul Berge at 8:27 AM