Here's a small portion of this week's Q Syndicate cartoon.
Posted by Paul Berge at 10:47 PM No comments:

Email ThisBlogThis!Share to TwitterShare to FacebookShare to Pinterest
Labels: Obama

A decade ago, Arizona Republican John McCain was the Log Cabin Republicans' favored candidate for president. Given his support of Steve May, a Arizona Republican legislator drummed out of the National Guard for being honestly gay, McCain seemed to be the only Republican candidate open to overturning Bill Clinton's Don't Ask, Don't Tell policy requiring gays and lesbians to be secretive, even dishonest, about their sexuality.

The Log Cabin picture of McCain as a supporter of LGBT service members never quite jived with the candidate's public statements, however. The cartoon above contrasts two of McCain's statements in 2000 Republican presidential candidate debates: one clearly supporting Don't Ask, Don't Tell; and the other hinting ever so obliquely that the policy doesn't work.

In 2008, candidate McCain forcefully supported Don't Ask, Don't Tell, and now he's the media's go-to guy for defending the policy. He keeps saying that the policy is working, but it's hard to see how. The U.S. military has lost the talent pool of dozens of Arabic translators, medics, foot soldiers, seamen and airmen over the course of the wars in Iraq and Afghanistan countries for no better reason than that these service members refuse to live a lie.

(Meanwhile, two shocking examples of heterosexuals engaging in perverse shenanigans at Abu Ghraib and the American embassy in Kabul -- and documenting their exploits by posting photographs on the internet -- leaves one wondering just how much worse McCain thinks the damage gay and lesbian service members would inflict would be.)

Exactly how is Don't Ask, Don't Tell working, Senator? Replacing a flat tire with the emergency spare in most modern cars "works" ... but not for long.
Posted by Paul Berge at 1:04 PM No comments: 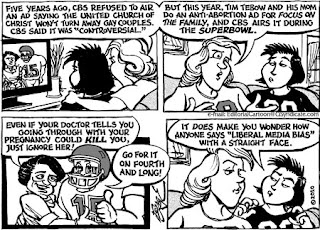 This cartoon refers to contradictory decisions by CBS regarding two advocacy commercials intended for airing during the Superbowl. The first, in December of 2004, was for the United Church of Christ, and showed a bouncer at a church door, rejecting various minorities, including a same-sex couple. Christ wouldn't turn you away, went the tag line, and neither will we. CBS (and NBC) rejected the ad on the grounds that it was controversial.

Fast forward five years, and Focus on the Family brings an ad featuring college football star Tim Tebow and his mother. Now, I'm sure the text in the cartoon is not a verbatim quotation of the ad, but anyone who knows the Tebows' life story will be able to catch whatever subtext underlies what they do say. Mrs. Tebow was on medication that, because she became pregnant with Tim, could have threatened her life; but she went through with the pregnancy in spite of her doctors' warnings and Florida won the Sugar Bowl.

Focus on the Family flaks contend that FotF merely "supports families." You'll forgive me if, since they have spent the last couple of decades loudly and enthusiastically undermining and demeaning my family, I don't believe that for a minute.
Posted by Paul Berge at 7:29 AM 2 comments:

Sneak Pique of the Weak

I'm not entirely pleased with this week's cartoon, but here's a sneak peek at it anyway.
Posted by Paul Berge at 11:25 PM No comments:

What can Brown do to you?

Massachusetts voters, fed up with the prospect of health care reform for the other 49 states in the union, voted for a guy who drives a truck and knows who Curt Schilling is.

Now that Republicans have achieved a 41-vote supermajority in the Senate (42 if you count Joe Lieberman, of course), the verdict is clear. Americans who voted for change in 2008 have been outvoted by Massachusetters who voted for change in 2010. Republicans have called for the administration to slow down health care reform -- which, at the previous pace, would mean shifting into reverse.
Posted by Paul Berge at 7:54 AM No comments:

After commemorating the Rev. Dr. Martin Luther King Jr. yesterday, we move on from a man of God to a charlatan: 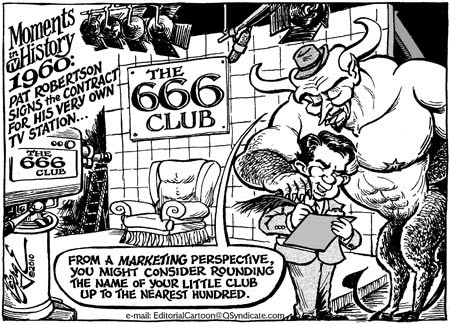 The inspiration for this cartoon, of course, is Pat Robertson's claim that Haitians made a deal with the devil for their independence 205 years ago, and that's why they have such horrible luck. Robertson is a believer that bad things happen to people who deserve them, which he no doubt would have been happy to tell Job. He has made this claim whenever death and disaster have struck, and his only regret seems to be that some of his predictions of doom and destruction have failed to come true.
I couldn't find any pictures of what Pat Robertson looked like when he was 30. Perhaps there were some historical pictures in the February 17, 1986 Time magazine cover story about him, but I don't have that issue lying around. So I just filled out and darkened his hair, and gave the devil a nice, 1960-appropriate hat instead.
Posted by Paul Berge at 7:58 AM No comments: 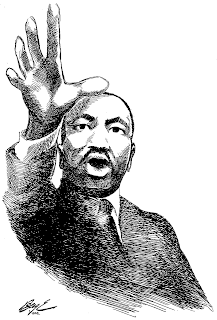 Nothing in all the world is more dangerous than sincere ignorance and conscientious stupidity.

Here's this week's Q Syndicate cartoon: An unexpected conundrum I encountered in drawing this cartoon was that I couldn't come up with any landmark or cultural stereotype to put in the background as cartoonese for "This is Portugal." Draw Big Ben in the background and men wearing bowlers, and everyone knows the cartoon is set in England. Draw the Eiffel Tower and some guy wearing a beret and a long-sleeved tee with bold horizontal stripes, and voilá! we're in France.
There must be some castle or cathedral in Lisbon that all tourists are obliged to visit; but I couldn't name one, let alone expect readers to know what it looks like. Nor is there an identifiable Portuguese national costume or catch phrase. I bet you would be more likely to recognize their soccer uniform than their flag. (Did you even know that there is a second "u" in Portuguese?)
Posted by Paul Berge at 9:45 AM No comments:

Former 1st CD Congressman Mark Neumann is running for the Republican nomination for Wisconsin governor this year. To appeal to the teabagger types, he proposes a lot of changes to the Wisconsin constitution, such as term limits and, the topic of this week's Racine Post cartoon, California-style voter initiatives.

The way initiatives work is that citizens muster up majorities to require the state to, say, keep all felons in prison for a century, plow all snowfalls over a quarter of an inch, use only non-toxic salt on the streets, and deport anyone caught speaking Spanish, while simultaneously keeping taxes at 1848 levels.

It works so well for California, after all.

Voters in California, having voted in constitutional amendments to have their cake one year and to eat it too the next, have rendered their state completely ungovernable. If the comments on media web sites are any indication, voters in Wisconsin would be just as likely to make impossible demands through initiative fiat.

It's also very easy to persuade a majority of voters to trample the rights of a minority. Any minority. Witness the various referenda on same-sex marriage: very few voters would actually benefit personally from same-sex marriage, while a substantial fraction of the electorate either feels or can be made to feel threatened by it. Then there is the majority who have no strong feelings about it either way; most of them don't vote, or pay so little attention to the wording of the ballot measure that they can't recall on Wednesday morning whether they voted Yes to stop gay marriage, No to stop gay marriage, Yes to okay gay marriage, or No to allow gay marriage.

When the legislature votes to take away your rights, you have the recourse of voting against the legislators who cast those votes. There is no such recourse in a voter initiative. The people who got the measure on the ballot, call them grass roots or astroturf, are no more accountable to you than are lobbyists. They answer only to their special interest.
Posted by Paul Berge at 5:34 PM No comments:

Back to the airport 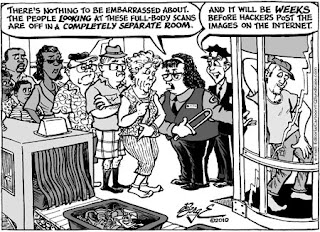 Eight years on, it's time to revisit airport security.
Posted by Paul Berge at 8:14 AM No comments:

Sneak peek of the week

Eight years ago, I had this frivolous response to the Shoe Bomber Terrorist. ...
Posted by Paul Berge at 11:46 PM No comments: