I've just received a copy of a book by Steve Freeman, Guns in America: Common Sense vs. Nonsense, which includes one of my cartoons. The book was written out of a sense of frustration with the failure of the U.S. Congress to pass the Toomey-Manchin bill after a gunman slaughtered twenty kindergartners and first graders and six adults at Sandy Hook Elementary School in 2012.

The author starts out his book description at amazon.com with a complaint about pro-gun reviewers slamming his book:


"IMPORTANT NOTE: Please ignore some reviews. The pro-gunners (anti-gun control crowd) have been planting negative reviews- one star- from the very beginning. They haven’t ordered or read the book, but this is what they do. The person who first did it (or organized it) discredited himself by planting the first 4 on the same day. Let’s play fair. At least read the book. Thanks."

He also notes in his letter to me that these people cannot possibly have read his book, since he knows personally all but two of the people who have bought his book to date. And, yes, I think we can safely ignore the review that puts "book" in quotation marks to indicate that, somehow, it isn't one. Sadly, I have to agree with one of the first several reviewers that the book lacks documentation -- the footnotes that any self-respecting work of non-fiction ought to have.

On the other hand, I welcome appreciation of editorial cartoon as a form of commentary. Other cartoonists in the book are Steve Greenberg, Bruce Plante, Robert Ariail and Kate Salley Palmer, and we are all properly credited.
Posted by Paul Berge at 4:53 PM No comments:

Q Toon: But It's a Dry Hate

I somehow forgot to post a sneak peek of my cartoon this week -- not that anyone was waiting with bated breath to play Guess The Cartoon, but I apologize to any fine drinking establishment that advertises Guess The Cartoon Night on Mondays. Here's the detail snippet from this week's cartoon anyway.

And here's the cartoon: 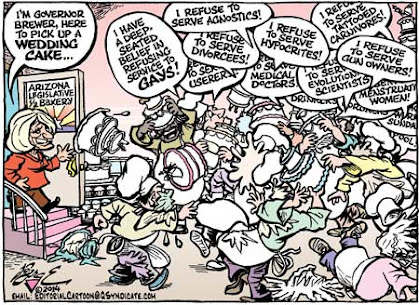 Arizona Governor Jan Brewer is expected to decide today whether or not to sign a bill that expands a religious exemption to any other law to include people who aren't actually religious practitioners. This is just so that wedding cake bakers and wedding photographers won't have to bake cakes or take pictures of LGBT couples. It begs the question of why any LGBT couple would want to hire a self-righteous bigot to bake their cake or take their picture, but there's always someone who finds religion after cashing the security deposit.
Posted by Paul Berge at 7:57 AM No comments: 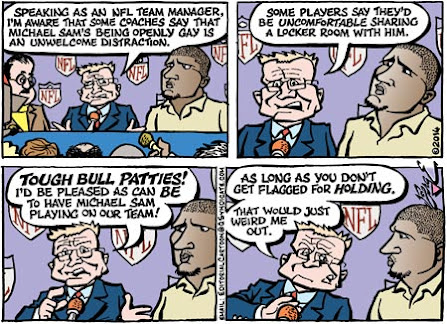 It's been over a week since top NFL draft pick Michael Sam announced to the world that he is gay, so my fellow cartoonists have had plenty of time to draw bulky, hairy bruins quaking in the locker room at the prospect of showering in Mr. Sam's proximity. My cartoon this week is an effort to draw something else, which is too bad for those of my readers who would have enjoyed another picture of naked hunks in their gay newspaper.

One thing that none of my fellow ink-slingers have not drawn is Mr. Sam himself (except from the back or under a helmet). I bought a copy of Sports Illustrated last week in part to make sure that I had plenty of pictures of Michael Sam to work from -- only to find that the cover story about him featured only one photo of his face.

Here's wishing him a long and illustrious career so that I have enough time to get his caricature right.
Posted by Paul Berge at 10:29 AM No comments:

Instead of the usual detail edit from this week's cartoon, today I'm posting a preliminary sketch for it out of my sketchbook.

This is mostly because I'm actually more pleased with this pencil sketch than I am with the versions of it that went in the four-panel final product. I was seriously considering inking this and copying and pasting it into the cartoon.

But I respect my readers too much.
Posted by Paul Berge at 4:38 PM No comments:

As long as the Winter Olympics are underway, here's an illustration I drew for the front page of the UW-M Post for a winter sports feature issue in 1991 or 1992. If it was the latter, there could have been a tie-in to the Albertville games, but I'm afraid I don't remember. All I know about this unsigned, undated sketch is that it has to have been drawn after a cover I drew for the Christmas 1990 issue, because the same snow-covered version of the Post's flag I drew for the Christmas issue was reused for this one. 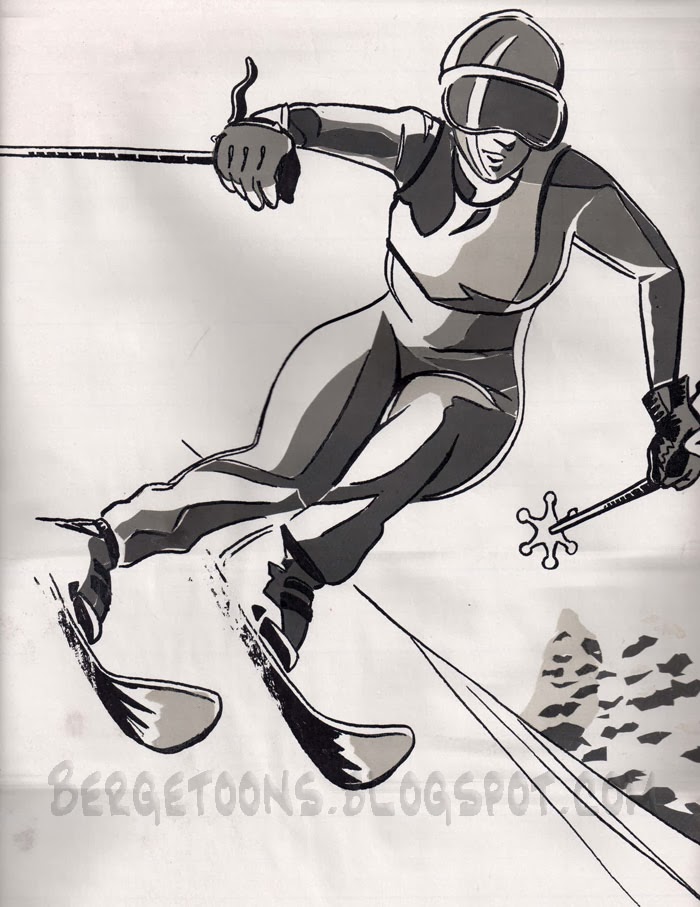 This was my first try at using press-apply halftones -- the sharply defined areas of gray on the skier, her skis, and the trees in the background. (The other gray areas in this image are because the paper is larger than my scanner -- and slightly warped now -- and I wasn't able to hold every square inch tightly to the glass. This is not the entire drawing, although most of the rest is open space left for headlines and other copy.)

At the time, my usual practice was to employ a lot of cross-hatching, but I wanted to go for a crisper effect here. Using an Exacto knife, I cut the halftone shapes out of a sheet of adhesive-backed plastic and applied them onto the drawing as smoothly as possible, avoiding any overlap. The tiny gap on the skier's right knee still bugs me.

This is just the black layer of the drawing; there was also a blue layer, which I don't have. The blue layer defined the background trees and the spray of the snow from the skis, and allowed the headline copy to be white.

Posted by Paul Berge at 9:48 AM No comments:

Q Toon: To Have and to Holder 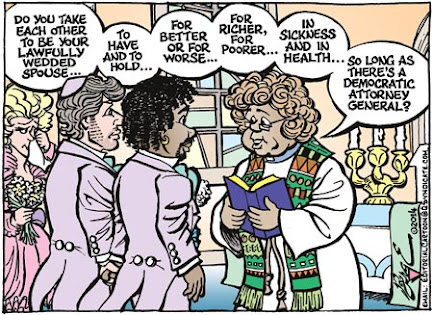 When I pitched this cartoon to my editors, it was because U.S. Attorney General Eric Holder announced that the Justice Department would give same-sex married couples "full and equal recognition, to the greatest extent under the law" relative to mixed-sex married couples. The policy shift has ramifications in cases of bankruptcy, alimony, whether one spouse can be forced to testify against the other, bereavement leave, prison visitation, and myriad other situations.

In my home state of Wisconsin, on the other hand, Republican Attorney General J.B. Van Hollen and the Republican running to replace him this year plan to defend mixed-sex marriage supremacy with vigor. The Democratic candidates for the office have announced that neither would defend that amendment to the state constitution.
Posted by Paul Berge at 9:32 AM No comments:

Nope, I'm afraid that I didn't hear about Michael Sam's coming out announcement in time for this week's cartoon. It's nice to have more than one topic to draw about, though -- especially considering how often current events keep bringing me back to the same couple of topics over and over.
Posted by Paul Berge at 4:05 PM No comments: 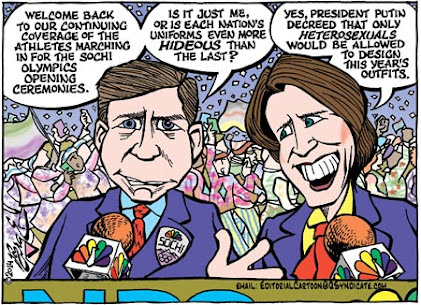 I've been seeing a lot of complaints about the U.S. Olympics teams' outfits, and Facebook keeps urging me to check out the Norwegian Olympics curling team's pants. Are the Germans' team rainbow jackets a protest against Russia's antigay laws, or just a way to make themselves easy to find if they get lost on the slopes?

Surely, there is no pro-gay message behind the Russians' own pink suits, which are even more colorful than the tap water at the Sochi hotels.
Posted by Paul Berge at 10:16 AM No comments:

Now that the Superb Owl is over, it's time to turn our attention to the O'Limp X.

By the way, if you find yourself trapped in a conversation with someone who is upset about Coca-Cola's TV ad because of its multi-lingual rendition of "America the Beautiful" and the gay dads at the skating rink, you can point out that "America the Beautiful" was written by a lesbian.
Posted by Paul Berge at 5:05 PM No comments: