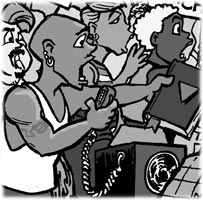 Once again, This Week's Sneak Peek serves as an excuse to update Swhateverback Saturday's post.

A reader has helpfully pointed me to Alex Jay's entry on Orville P. Williams at Stripper's Guide, where I learned that O.P. Williams was almost certainly not on the cartooning staff of the Los Angeles Evening Herald. He did, however, draw for William Randolph Hearst's Star Publishing out of New York at some point in time, which would no doubt have supplied Williams's cartoons to the Herald.

According to his obituary, Williams joined the staff of Hearst's New York Evening Journal in 1919; he had drawn for the Boston Herald and Philadelphia Evening Ledger — not Hearst newspapers — before World War I. At some point, he crossed over to the lurid tabloid New York Evening Graphic (founded in 1924, folded in 1932) — again, not a Hearst paper, but whose publisher was even more eccentric than Mr. Hearst.

Jay's post also includes one item tying O.P. Williams to Winsor McCay: at the start of Williams's career, he succeeded McCay at the Cincinnati Enquirer.
Posted by Paul Berge at 9:41 AM