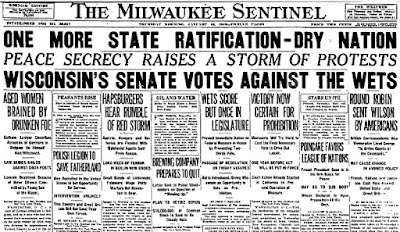 Just a quick Synthale Saturday post today to mark the centennial this week of ratification of the Eighteenth Amendment to the U.S. Constitution.
It's as if the idea wasn't even the least bit controversial. States were falling over each other to enshrine Prohibition in the Constitution. With ratification by Nebraska, North Carolina, and Utah legislatures on January 16, 1919 — less than a month after its approval by Congress — Prohibition had passed muster in the required 36 out of 48 states. Missouri and Wyoming approved ratification later that day, and all the remaining states but Connecticut and Rhode Island would follow suit by March 3.
The 1910's witnessed a rash of amendments to the Constitution — one more of them than the antebellum trio of Amendments from 1865-70. Passage of the Sixteenth Amendment in 1913, authorizing federal income taxation, paved the way for the Eighteenth Amendment by giving the government, heavily reliant on liquor excise fees, an alternative source of funding. The Nineteenth Amendment extending the vote to women was slogging its way through Congress and state legislatures simultaneously with the Eighteenth.
The Eighteenth is unique among all the Articles and Amendments in that it is the only one to limit the freedom of individuals. All the others grant powers to or limit powers of the federal government or states. (Granted, one could argue that the Thirteenth Amendment limits the freedom of individuals to own slaves, but it does so by extending the Declaration of Independence's promise of "life, liberty, and the pursuit of happiness" to other individuals.)
And so, the Noble Experiment was underway.


After one year from the ratification of this article the manufacture, sale, or transportation of intoxicating liquors within, the importation thereof into, or the exportation thereof from the United States and all the territory subject to the jurisdiction thereof for beverage purposes is hereby prohibited.

"Ding" Darling brings our discussion back to the present day and Teetotaler Trump's obsession with his ugly border wall. If Congress lets him have this one vanity project, who's to say he won't shut down the government again to force repeal of the Twenty-first Amendment?
Posted by Paul Berge at 6:20 AM