Not knowing at my drawing board on Sunday how Mercurial American President Donald Trump's government shutdown, his Oval Office address to the nation, the Democrats' response, or even the Golden Globes was going to pan out, I came up instead with this. 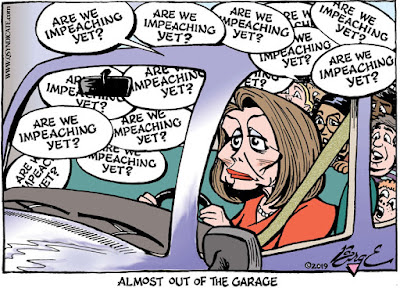 Look, I don't know how much longer we can wait for Robert Mueller to wrap up his investigation; but impeaching a president requires finding an actual high crime or misdemeanor that will stand up in the Senate. The founding fathers didn't provide for impeachment in the case of a toxic presidency, and by the time Trump's mental instability becomes obvious enough for Section Four of the 25th Amendment to be unquestionably necessary, there won't be enough Principal Officers left in his cabinet to make a quorum.

But for now, the prospect of impeachment is overshadowed by more immediate issues. Trump is bound and determined to get that big ugly monument to His Panic along our southern border, and he doesn't care whom he has to starve into submission to get it. That's his idea of how negotiation works, and we're about to see how long Nancy Pelosi and her anxious car pool are willing to put up with him.
Posted by Paul Berge at 7:53 AM