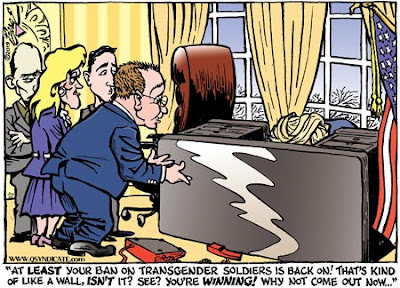 From the outside, it looks like January has been a bad month for Mercurial American President Donald Joffrey Trump. Nancy Pelosi called his bluff on shutting down the government over Trump's Ugly Border Wall, and Trump punted.

Robert Mueller is coming down hard on Trump's lawyers, co-conspirators and trusted confidantes, and they're all singing like canaries, hitting the talk-show circuit with their tell-all books, or, in the case of Rudy Giuliani, establishing their insanity defense.

Testifying before Congress, his own highest ranking intelligence advisers publicly disagreed with him on the level of threats posed by ISIS, Syria, Iran, North Korea, Russia, Latin America, NATO and Jared Kushner.

And he had nothing to serve the collegiate champion Clemson Tigers but junk food from the drive-thru window.

But lest you forget, Trump gets to shut the government down again on February 15, and Nancy Pelosi won't be able to take away his State of the Union privileges then!

And you know what? He can still rely on the loyalty of Roger Stone. Just look at the guy. You can always trust a fella who dresses like a Batman villain and has a tattoo on his back of the only President ever to resign in disgrace. He certainly seems like a stable genius, just like Trump himself.

Speaking of which, Trump knows so much more about foreign affairs than all those people who actually bothered to do any research on the subject. Books? Experience? A lifelong career in the CIA? Who needs it? Trump is the foremost expert on everything anyone ever needs to know about anything from Nambian health care to Swedish terrorism! Brains? He don't need no stinking brains! Trump has his gut!

Furthermore, he's been feeding that gut nothing but KFC nuggets, McDonalds Big Macs, and Taco Bell salad bowls all his life. That gut got him elected President of the United States in spite of the worst second-place finish of any candidate since John Quincy Adams. So there!

Clarence Thomas's wife met with Major Bonespurs the other day. Perhaps she knows.
Posted by Paul Berge at 7:39 AM