Q Toon: Riding Into the Sunset 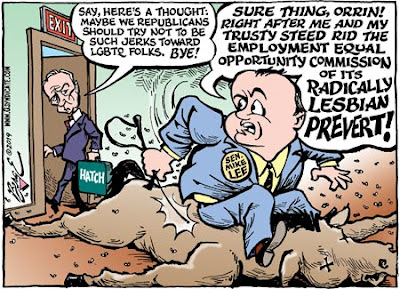 Utah's newest Senator has captured attention with his op-ed swipe at Donald Joffrey Trump, but let us take a moment here to commend Utah's newly retired Senator Orrin Hatch. In his farewell address to the Senate, Hatch, who earned a Zero on the Human Rights Campaign's most recent scorecard on LGBTQ issues and once claimed that homosexuals have a "psychological deficiency," urged his colleagues to find common ground with the LGBTQ community:


“Nowhere is the pluralist approach more needed than in the fraught relationship between religious liberty and LGBTQ rights. . . . Religious liberty is a fundamental freedom. It deserves the very highest protection our country can provide. At the same time, it’s also important to [take] account of other interests as well – especially those of our LGBTQ brothers and sisters. Pluralism shows us a better way. It shows us that protecting religious liberty and preserving the rights of LGBTQ individuals are not mutually exclusive. I believe we can find substantial common ground on these issues that will enable us to both safeguard the ability of religious individuals to live their faith and protect LGBTQ individuals from invidious discrimination.”

That moment of commendation now being dispensed with, let us turn to Utah's now Senior Senator, Mike Lee, who is single-handedly holding up the nomination of three Employment Equal Opportunity Commissioners, and thus denying the EEOC a quorum to take any action, because one of them is a lesbian.

The religious right has had their knickers in a wad over Chai Feldblum ever since President Barack Obama named her to the five-member EEOC in 2010, because she supports marriage equality. They have fabricated inflammatory remarks she never made and twisted others to portray her as hostile to the faithful.


Conservative activists have condemned Feldblum in the American Conservative (“an enemy of religious liberty”), the Heritage Foundation’s Daily Signal (a “radical nominee”), the Daily Wire (“Trump’s worst federal nomination”), the Blaze (“radical activist against religious freedom”), and elsewhere. Led by the anti-LGBTQ Family Research Council, right-wing advocacy groups have condemned Trump’s re-nomination of Feldblum. (The FRC previously maligned Feldblum by crediting her with the statement “Gays win; Christians lose,” which she never said.) In a statement, Lee echoed these criticisms, alleging that Feldblum has “radical views on marriage and the appropriate use of government power” that would lead her “to use the might of government to stamp out traditional marriage supporters.”

Feldblum, the daughter of an Orthodox Jewish rabbi, has responded that she was raised “in a home in which religion and God were the defining aspects of our daily lives.” Her 2006 essay on finding an accommodation between non-discrimination policies and "religious liberty," Moral Conflict and Liberty: Gay Rights and Religion, leans toward favoring non-discrimination...


If I am denied a job, an apartment, a room at a hotel, a table at a restaurant or a procedure by a doctor because I am a lesbian, that is a deep, intense and tangible hurt. That hurt is not alleviated because I might be able to go down the street and get a job, an apartment, a hotel room, a restaurant table or a medical procedure from someone else. The assault to my dignity and my sense of safety in the world occurs when the initial denial happens. That assault is not mitigated by the fact that others might not treat me in the same way.

...but insists that religious beliefs are owed respect and a place in public policy.


My argument in this article is that intellectual coherence and ethical integrity demand that we acknowledge that civil rights laws can burden an individual's belief liberty interest when the conduct demanded by these laws burdens an individual's core beliefs, whether these beliefs are religiously based or secularly based. Acknowledging such a liberty interest will not necessarily result in the invalidation of the law or the granting of an exemption for the religious individual.

Which sounds to me like she and Senator Hatch could have had some meaningful conversation, had he not waited until he was on his way out the door to float the idea of reason, rationality, and compromise.
Posted by Paul Berge at 7:53 AM