Once a month, I turn the blog over to my dad, a chemistry Ph.D. who writes an "Environmental Stewardship" column for local church newsletters. The following is by John Berge:

Recently there have been published a number of interesting and informative scientific review papers published on the environment and therefore on Environmental Stewardship. One published in Environmental Science & Technology Letters used 2016 data from the Global Burden of Disease project to calculate loss in life expectancy as a function of small particle (2.5 micrometers or less) pollution in various countries. 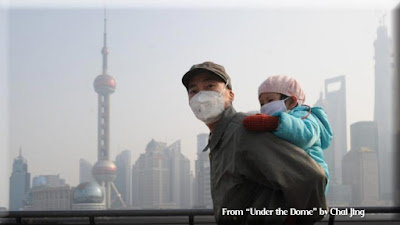 Obviously, small particles are just one type of pollution, but one that is very significant around coal-fired power plants and the rail lines leading to them. On  average in the USA, the drop in life expectancy is only about four months; but these data fall in the portion of the response curve that is steepest, so a small change in pollution, in either direction, has a corresponding large effect.

In Bangladesh, Egypt and Niger, the curve has leveled off, and it will take great reductions in pollution to change their almost two-year reduction in life expectancy. The report also noted that in Southeast Asia, PM2.5 pollution had a bigger effect on life expectancy than all cancers combined.

Another report was from the Intergovernmental Panel on Climate Change. They were asked by the United Nations to examine how much better off we would be if greenhouse gas emissions were reduced sufficient to limit temperature increase to 1.5ºC rather than the goal of 2.0ºC set by the Paris Agreement on Global Warming.

They reported that global average sea level rise would be reduced from 56 cm to 48 cm (1.84 feet to 1.58 feet). The ocean’s acidity increase would be reduced from 24% to 9% and the probability of an ice-free Arctic Ocean in any given year would go down from 16% to 3%. The proportion of global population facing at least one severe heat wave every five years would drop from 37% to 14%. The number of vertebrate species that would lose at least half of their viable range would be cut in half, from 8% to 4%.

Carbon dioxide, the most abundant of the greenhouse gases that we humans have been increasingly producing since the start of the industrial revolution, is a natural component of the atmosphere. Without it, our planet would revert to a “Snowball Earth,” which it is believed by many geologists to have been 600 million years ago. It is the rise from 270 ppm before our increasing use of fossil fuels to the current approximately 412 ppm that is the problem. We, and the rest of nature, have evolved with the lower levels of greenhouse gases and we are now seeing the consequences of this rapid, human-caused rise.

While much of the corrective actions to avert the damages of global warming may depend upon governments, there is much that we as individuals and families can do:
Carbon dioxide, methane and chlorofluorocarbons are pollutants; good environmental stewards should treat them as in my imaginary umpteenth commandment above.
Posted by Paul Berge at 5:16 PM