A propos of nothing, this week's Snowback Saturday feature revisits a handful of my cartoons from the winter of 1989. 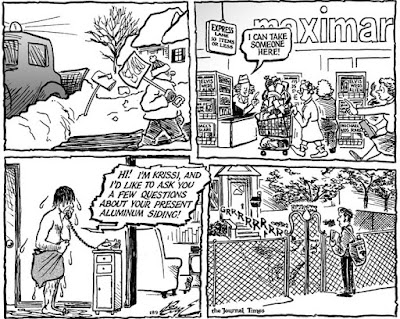 I was freelancing for the Racine Journal Times in those days, and editor Sean Devlin alerted me that the editorial page was going to invite readers to send in their ideas for a "There Oughta Be a Law" feature. The above cartoon appeared with the announcement of the invitation on January 29. The cartoon below illustrated a selection of the responses the Journal Times received, from serious proposals such as regulating congressional pay raises to pet peeves like prohibiting retail stores from "jumping the season." 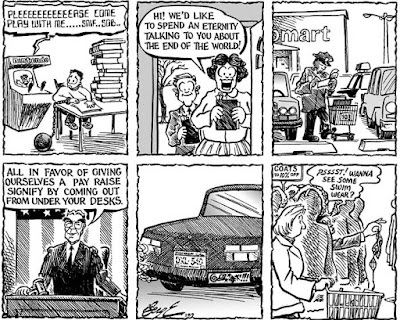 "There oughta be a law against obscene bumper stickers." — Barbara Smith

I really goofed by drawing the above —and being paid for it— as a single cartoon instead of six separate ones. The Journal Times broke it up and scattered the panels around the page, coupled with the responses each one illustrated. They also printed each panel larger than I drew them; I prefer to draw my cartoons larger than they will appear in print. 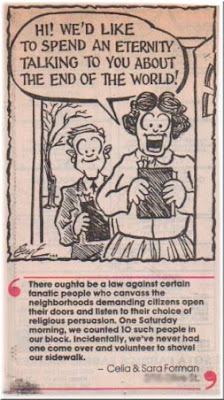 At least they reprinted my signature in each of the panels.

My cartoons for the Journal Times focused primarily on local issues, but I continued drawing about national and world issues for a couple of University of Wisconsin student newspapers in the area. 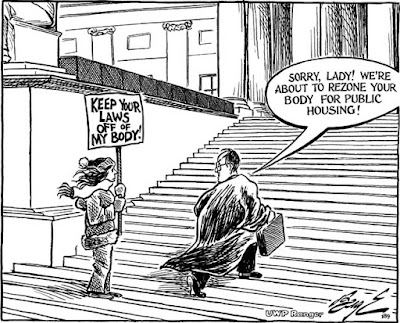 If activists defending and attacking abortion rights are dismayed that they don't get widespread press coverage these days, it's partly because the protests have been covering the same ground for nearly half a century. If the only news is that a bunch of white teenage boys smirked at some Native American protesters who wouldn't have otherwise gotten any press coverage either, well, that's all that's going to get any media exposure beyond Fox News, CBN, and the Sun Myung Moon press. 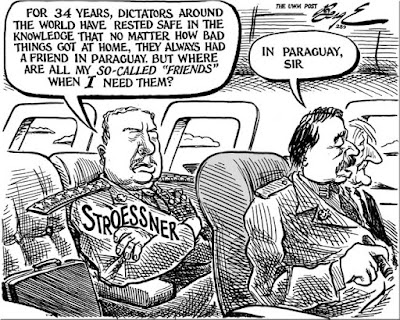 With authoritarian dictatorship on the resurgence around the world today, let's take a moment to recall how 1989 seemed to herald a global rise of democracy. The fall of the Iron Curtain would be more memorable, but the year started with the overthrow of Paraguay's President Alfredo Stroessner on la Noche de la Candelaria, almost 35 years after the then-Army General had overthrown the country's democracy.

Unlike the Eastern European revolutions to come, Stroessner's ouster was not due to a popular uprising, however, but a military coup led by one of his own most trusted confidantes. It is alleged that the coup plotters detested the prospect of Stroessner installing either of his sons as his successor: Alfredo Jr. was a coke head, and Gustavo was gay. Nevertheless, the new regime liberalized the Paraguayan constitution and willingly turned the government over to a popularly elected President in 1993. 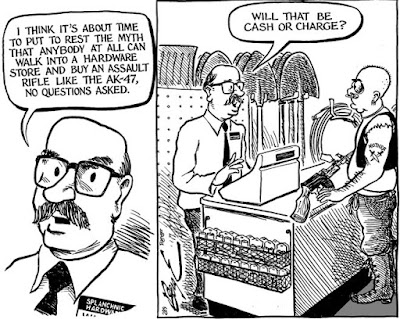 Other issues, however, remain evergreen, constant, same as it ever was. In spite of being older than Congressman Alexandria Ocasio-Cortez.

And older still than the latest asshole who fulfilled his lifelong dream of becoming a senseless mass murderer.

You'd think that there oughta be a law by now.
Posted by Paul Berge at 6:45 AM