Q Toon: Shut Down and Out 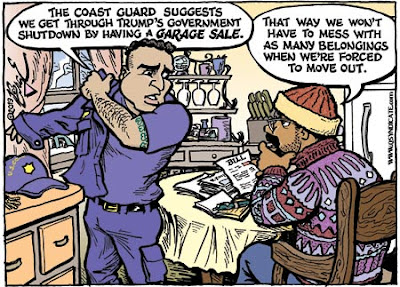 Yes, it's true: The United States Coast Guard posted a number of suggestions to its service men and women, furloughed or working without pay during Donald Joffrey Trump's partial shutdown of the government, on how to stretch their finances. Included on the list is having a garage sale, which are so popular in January.

The Coast Guard yanked the list off the internet once the media got wind of it, but we're told that other suggestions were to take up babysitting gigs or enlist as a "mystery shopper."

Of course, the Coast Guard and other federal employees will eventually get paid on that glorious day when Trump's temper tantrum terminates — although if certain Republicans had their way, the furloughed ones would have been shut out of luck. Government contractors and their employees, on the other hand, are finding out what it's like to be a Trump contractor.

Since Republicans are the party that has campaigned for decades about shutting the government down, you'd think that Trump has the upper hand in any negotiation in which he can say, "Okay, you want National Parks? I don't care; I wouldn't set foot in one. You want unemployment compensation? Get a job! You want food safety inspections? My steak company mighta stayed in business if I didn't have to worry about those meddling do-gooders."

Who knew that Nancy Pelosi had the cojones to threaten the one thing Trump has been looking forward to this month: a captive audience at his State of the Union address, half of whom would lovingly cheer and applaud on cue every 30-40 seconds and would fawn over him as he entered and left the chamber.

We may be about to witness the first State of the Union address delivered by tweet. Although I think it's more likely that his staff will discover that Trump has a previously scheduled campaign rally in Bum Fork, South Carolina.
Posted by Paul Berge at 7:45 AM