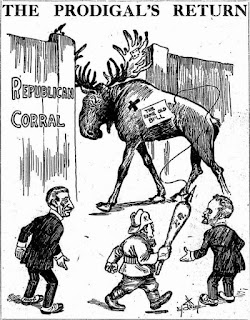 To explain: in 1912, former President Teddy Roosevelt made a third-party run for the presidency as the candidate of the Progressives, also known as the Bull Moose Party. He won more votes than the Republican nominee, incumbent President William Howard Taft, but the election went to Democrat Woodrow Wilson -- ending two decades of Republican administrations.

Here the cartoonist depicts Roosevelt and his Bull Moose returning to the Republican fold in 1916 (apparently you could get away with "the same old bull" in a family newspaper even then). The other two figures in the cartoon are Republicans Elihu Root and Henry Cabot Lodge.

Roosevelt's return to the Republican Corral left open the question of whether the remnants of the party would settle with the Democrats or Republicans, here represented by their 1916 presidential nominees, President Wilson and Charles Evans Hughes, who had resigned his seat on the Supreme Court to run for President.
Most Progressives returned to the Republican Party, with a few exceptions. Wisconsin's Bob LaFollette continued a valiant effort to revive the Progressive brand, receiving 17% of the national vote (and winning his home state's electoral votes) as the Progressives' presidential nominee eight years later.

As we face the prospect of a Republican split producing a third party candidacy again this year, it is hard not to notice how little success third parties have had electing presidents since the Civil War. Dixiecrats and Progessives bolted the Democratic Party in 1948, and Harry Truman won anyway. George Wallace left the Democrats to run under the American Independent banner in 1968, helping throw the election to Richard Nixon. John Anderson left the Republican party to run as an Independent in 1980, and it didn't hurt Ronald Reagan in the least.
And in none of those cases were those third parties a significant factor in the elections that followed. The third party that might possibly have had a chance of catching on, Ross Perot's Reform Party, succeeded in winning the Minnesota governorship in 1998; but once Perot took himself out of the running, it nominated such a repulsive presidential candidate in 2000 that it promptly fizzled away into vapor.

On the other hand, its 2000 nominee had more of an effect on the outcome of the election than this guy did: 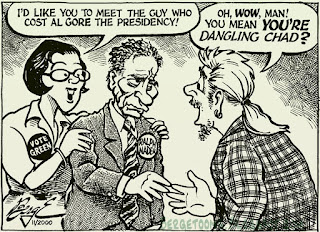