Q Toon: Bands on the Run 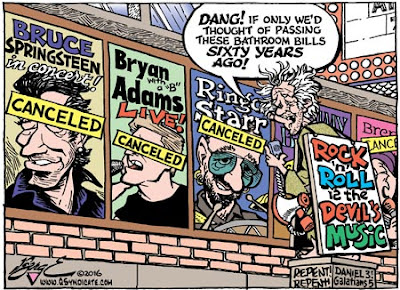 You can tell that I was drawing this cartoon Sunday night; on Monday, I would surely have included Boston and Pearl Jam among the list of concert cancellations. Other acts canceling shows in North Carolina over HB2 include Mumford & Sons, Cindi Lauper, and Cirque du Soleil.

It's not just those liberal elite rock artistes; businesses from PayPal to Deutsche Bank to the NBA to the Community Transport Association of America are canceling plans to expand in the state or to hold their conventions there:


Combined, says the Greater Raleigh Convention and Visitors Bureau, the passage of HB2 has cost the area $3.1 million in event revenue that would have been generated over the next few years. GRCVB President and CEO Dennis Edwards says that other groups are also raising concerns.

As much as I appreciate all this support from these artists, movers and shakers, I do have some concern that the locations being hurt most are the cities (Charlotte in particular) who have been trying to be progressive and lgbt-friendly, only to have their efforts outlawed by the exurban and rural Republicans in the state capitol who don't cotton to those city folk managing their own affairs. Until ConAgra and Edwin Jones Investments refuse to do business in the state, these boycotts have little effect on the folks in Hayseed Corners and Woodleyvale Heights.

(Perhaps Xhamster.com's Denial Of Service will be more effective 'round those parts.)

The Association of American Editorial Cartoonists announced this week that we are going full speed ahead with this fall's convention at Duke University.


"Other groups and companies are boycotting because that is the only way they can express a political opinion," said Adam Zyglis, the 2015 Pulitzer Prize winner for Editorial Cartooning, and current president of the AAEC. "Expressing an opinion is precisely what we do, so I say we should go to the heart of the controversy and speak out on this issue."

✒
By the way, speaking of drawing my cartoon on Sunday night, I had HBO's Confirmation on while I was at my drawing board — with my head down in my work, I can't say I was watching the show — and I have to mention how spot-on Greg Kinnear's Joe Biden was. He may not look a lot like the then-Senator from Delaware, but he had the voice down to a "t."
Posted by Paul Berge at 7:59 AM