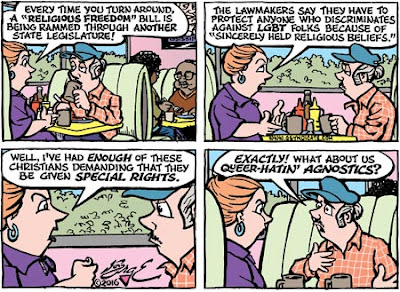 Good Lord, people, this is the third week in a row I've had to come up with something about anti-LGBT "religious freedom" laws. States are passing them faster than I can draw them: this week, it was Mississippi, with Kansas also putting a bounty on transgendered students trying to take a bathroom break at school.

Lawmakers in Illinois, Massachusetts, Missouri, Tennessee, and (no surprise) Wisconsin have also hopped on the transbashing bathroom bill bandwagon.


For measures requiring that bathrooms be sex-segregated, the lawmakers needed to decide how, precisely, they would define biological sex. They used a range of definitions, and in two the definition was tautological (“as biologically defined”)
Other bills got a lot more specific. Thirteen specified that chromosomes should be taken into account to define sex, but only Indiana’s House Bill 1079 was detailed enough to say that a female was defined as someone with “at least one X chromosome and no Y chromosome” and that males included everyone with “at least one X chromosome and at least one Y chromosome.”

A friend tells me that he heard a caller in to one of those right-wingnut talk radio shows (and really, is there any other kind?) voice his support of this sort of legislation because he wanted his daughter to be able to use a public ladies' rest room without some guy waving his junk around at the next urinal.

I'll just give you a moment to think about that one.
Posted by Paul Berge at 8:22 AM