100 Years Ago: A Midwestern Perspective

I'm kicking things off this Sláinteback Sathairn with a large (nearly half a page) ad in the April 23, 1916 Chicago Tribune for their own editorial cartoonist, John T. McCutcheon.

"For more than 20 years he has been the favorite of the Chicago public," the ad boasts. "Thousands of Tribune readers look for McCutcheon's cartoon first, and the war headlines second." After touting his experience dodging bullets in various war zones and interviewing citizens and diplomats, the ad concludes, "He often says more in a single cartoon than many writers can say in a whole page of type. ... Don't miss them. You'll be behind the times if you do."

McCutcheon's cartoon on the front page that day considers the prospect of America joining the Great War, the idea that our troops might be sent anywhere around the globe being quite novel back then. For someone with experience dodging bullets, he makes war seem like quite the jolly adventure:

On the Tribune's editorial page that day is a cartoon by J.N. Ding for the Des Moines Register with the midwest's other prominent Republican cartoonist's thoughts on preparedness -- the topic of a great many cartoons of the period -- and a the prevailability of cooler heads.

C.F. Naughton was a less prominent cartoonist, drawing for the front page of the Duluth Evening Herald. He doesn't seem sympathetic to either the Republican/Progressive former President Theodore Roosevelt or the Democratic incumbent President Woodrow Wilson in this next cartoon.

Bill Clinton and Harry Truman may have remained active in party politics, and Jimmy Carter continued to work for human rights and election monitoring around the world; but I don't think there has been any President since T.R. so eager to meddle in affairs of state after leaving office.

Naughton labels Roosevelt "Copperhead," originally the term for northern Democrats who opposed the Civil War. In the top panel, Roosevelt urges Wilson to declare war on Germany; in the bottom panel, he complains "What are you trying to do? Get us into a war with Germany?" Yet, in neither panel does Wilson seem to be set to "do something."

Meanwhile, rebels in Ireland (then still wholly a part of the United Kingdom) attempted to take advantage of England's entanglement in the continental war, issuing the "Easter Declaration" of an Irish Republic on April 24. Several days of violence followed in the streets of Dublin. Germany attempted to send weapons to the Irish, but the shipment was intercepted. Still, Naughton exaggerates the German connection with the "Made in Germany" ribbon on his cat:

England managed to put down the Easter Rising by the end of the month at the cost of 500 casualties on all sides. Thousands more were arrested and imprisoned or sent to internment camps, and the seven signers of the Easter Declaration were executed.

I was interested to find out how John McCutcheon and the Chicago Tribune handled the Easter Rising, what with their pro-Allies stance vs. the significant Irish population in town. But while Ireland rated banner headlines all week, McCutcheon appears to have taken the week off (that April 23 advertisement notwithstanding). When he returned to the front page the next Sunday, a speech in Chicago by Teddy Roosevelt overshadowed the failure of the Irish revolt as far as McCutcheon and the Tribune were concerned. 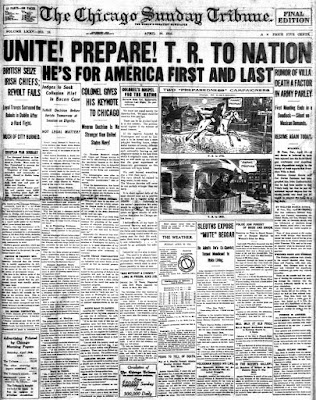