I'm a little late to the Prince Tribute Cartoon Wake, but it was about time I drew something that didn't have anything to do with North Carolina's bathroom bill. 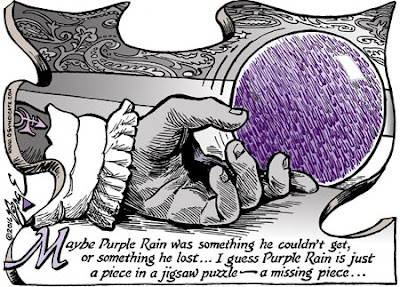 Prince had, shall we say, a complicated relationship with the LGBT community. He sang, "Am I black or white? Am I straight or gay?" and "I’m not a woman, I’m not a man; I am something that you’ll never understand."  He rejected stereotypical cisgender norms, performing in androgynous but highly sexual outfits, eyeliner and blush.  Becoming for a time The Artist Formerly Known As Prince, he created as his identity "Love Symbol #2,"

, an amalgam of the male and female symbols with a horn through it. It all made him an inspiration to queer Black Americans who didn't identify with the White American depictions of what it means to be something other than straight.

Nevertheless, Prince was most definitely and openly 100% heterosexual. If you bought "If I Was Your Girlfriend" expecting it to be some kind of anthem for Queer Nation, that's not what you got.

Did he oppose marriage equality? Maybe yes. Maybe no.

So I guess what I'm getting at with this cartoon is the enigma that was Mr. Nelson, Prince,

, Camille, Joey Coco, or Alexander Nevermind, however you thought you knew him. "I am something that you'll never understand," indeed. He made a whole movie about "Purple Rain" that runs nearly two hours; and yet does anybody know what that really means?

At least it provided that basis for half of the Prince tribute cartoons out there, my own included. The other half, of course, drew crying doves.

Sure, I'd have liked to avoid referencing the same song as so many others, but I didn't find any hook out of my favorite Prince tune, "Mountains," which wasn't popular enough to be easily recognized, anyway. A cartoonist friend of mine derided one outlier, Henry Payne's cartoon showing a little red Corvette zooming through the Pearly Gates; but heck, Payne not only draws for the Detroit News, he's their Auto Critic. He takes any opportunity to draw cars in his toons. And I give him props for not referring to the same two songs the rest of us used.

Now, if the persistent rumors that pain killers were involved in Prince's death, we can all crank out cartoons quoting "I Would Die 4 U."

P.S.: If you want to get snooty about this stuff, I'm seriously not getting the purpose of Gary Markstein's, um, cartoon? here... I mean, a collage of celebrity tweets? What even qualifies that as a cartoon at all? How do you justify slapping a copyright notice on that? Do you know how many ideas I've rejected on this topic alone because I saw someone else post them on the internet before I could draw them?
Posted by Paul Berge at 7:38 AM