This Week in the Mexican Revolution 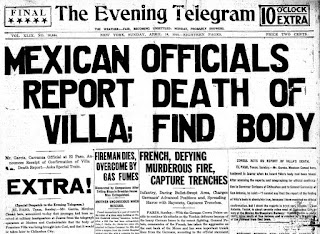 Salidaback Saturday takes another look at what editorial cartoonists were drawing 100 years ago this week, starting with another cartoon by Sidney Greene published on the same day as the greatly exaggerated report by Mexican Officials above, 100 years ago today:

Beclickenating to embiggenify, you'll see that President Wilson is juggling items representing Mexico, German U-boats, the Democratic Party, the Army and the Navy, and "unpreparedness."

The next four cartoons are from Oscar Edward Cesare's work for the New York Sun. "Saluting the Flag," showing Pancho Villa exulting near tombstones reading "Columbus, N.M." (see my March 26 post) and "Veracruz," was drawn for the April 10 edition; this image is from the original drawing at the Library of Congress.

In "Line of Succession," appearing in the April 15 edition, the cartoonist turns his attention to the precariousness of Mexico's Provisional President Venustiano Carranza. Carranza stands over the body of deposed President Victoriano Huerta, while Álvaro Obregón, "Gonzales" (perhaps Pablo González Garza), Emiliano Zapata and a presumed line of others come up behind him, daggers drawn.

"The Line of Succession"

In this April 17, 1916, cartoon below, Cesare prematurely predicts the overthrow of the Carranza government. Carranza would instead be elected Mexico's President the next year. (He did come to a violent end, however, shot to death on May 21, 1920 — there is dispute whether he was assassinated or committed suicide during the attack. And he was indeed succeeded as President by Obregón, who would eventually also be assassinated; although Cesare neglects in the above cartoon the fact that Obregón had lost his right arm in a bomb blast in 1915.)

Meanwhile, returning to 1916: Swedish-born Cesare (1885-1948) would lose his job at the Sun later that year when a new owner (a man who earned the epithet "the Executioner of Newspapers") decided that his newspaper didn't need no stinking cartoons. Cesare would go on to draw for the New York Post, New York Times, New York World and Harper's Weekly. Abandoning the more precise pen-and-ink style popular with many editorial cartoonists up to that point (Sid Greene being one example), Cesare's work here shares a looser, sketchier style with such contemporaries as Boardman Robinson and Rollin Kirby. As printing technologies improved, he went on from brush and grease pencil to employ washes and halftones.

"The Great Divide"
Posted by Paul Berge at 7:30 AM